[ Editor’s Note: As we have seen in the past, the liberal Israeli peace and human rights groups like Uri Avnery’s Gush Shalom and B’Tselem are on the front lines of challenging the Zionist military machine. 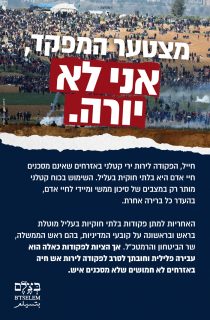 This is one of the most aggressive moves we have seen them do. Unlike here in the US, where any public objection to Israeli policy, no matter how outrageous a policy, will get you lynched for being an anti-semite, Jewish protest groups in Israel are treated differently, where the right to protest is deemed a God-given one, for Jews anyway.

We saw IDF snipers deployed with a lot of public fanfare to shoot unarmed Gazan protestors for the capital crime of “approaching the fence”, and their subsequent killings, including children.

My silver bullet for this conduct is that, if this had been done to Jews anywhere in the world – unarmed Jews being shot down and the head of State congratulating the soldiers – the entire world Jewish community would be calling for the killers to be nuked.

It seems the lives of the Gazans are not worth the trouble. No country has recalled ambassadors or even mentioned “sanctions” over this. UN employees are not wearing black arm bands. We are all waiting for justice to be done. Boycott Israel now… Jim W. Dean ]

B’Tselem urges soldiers to refuse to shoot protestors in Gaza: Shooting unarmed protestors is illegal, and a command to do so is a grossly illegal command

Tomorrow (Thursday) B’Tselem will launch a campaign entitled “Sorry, Sir, I can’t shoot”. The campaign will include newspaper advertisements clarifying to soldiers that they must refuse to open fire on unarmed demonstrators.

The organization is taking this unusual step following last Friday’s events, when soldiers used live fire against unarmed demonstrators. Of at least 17 Palestinians killed that day, 12 were killed at the protests. Hundreds more were injured by live gunfire.

The military is preparing for the demonstrations, but instead of attempting to reduce the number of those killed or injured, official sources have announced in advance that soldiers will use live fire against demonstrators even if they are hundreds of meters from the fence. B’Tselem warned of the expected outcome of this policy and now, ahead of the expected demonstrations this Friday, it is again clarifying that shooting unarmed demonstrators is illegal and that orders to shoot in this manner are manifestly illegal.

The responsibility for issuing these unlawful orders and for their lethal consequences rests with the policy makers and – above all – with Israel’s prime minister, defense minister, and the chief of staff. They are also the ones who bear the obligation to change these regulations immediately, before this Friday’s planned protests, in order to forestall any further casualties.

That said, it is also a criminal offense to obey patently illegal orders. Therefore, as long as soldiers in the field continue to receive orders to use live fire against unarmed civilians, they are duty-bound to refuse to comply.

B’Tselem wishes to emphasize that the illegality of such orders “is not a question of form, nor is it imperceptible, or partially imperceptible.” On the contrary, it is a case of “unmistakable illegality patently evident in the order itself, it is a command that bears a clearly criminal nature or that the actions it orders are of a clearly criminal nature. It is an illegality that pains the eye and outrages the heart, if the eye be not blind and the heart be not callous or corrupt.”

Contrary to the impression given by senior military officers and government ministers, the military is not permitted to act as it sees fit, nor can Israel determine on its own what is permissible and what is not when dealing with demonstrators.

Like all other countries, Israel’s actions are subject to the provisions of international law and the restrictions they impose on the use of weapons, and specifically the use of live fire. The provisions limit its use to instances involving tangible and immediate mortal danger, and only in the absence of any other alternative. Israel cannot simply decide that it is not bound by these rules.

The use of live ammunition blatantly unlawful in the case of soldiers firing from a great distance at demonstrators located on the other side of the fence that separates Israel from the Gaza Strip. In addition, it is impermissible to order soldiers to fire live ammunition at individuals for approaching the fence, damaging it, or attempting to cross it. Obviously, the military is allowed to prevent such actions, and even to detain individuals attempting to carry them out, but firing live ammunition solely on these grounds is absolutely prohibited.

B’Tselem – The Israeli Information Center for Human Rights in the Occupied Territories works to end Israel’s occupation in acknowledgment of the fact that ending the occupation regime is the only way to forge a future in which human rights, democracy, liberty and equality are ensured to all persons living between the Jordan River and the Mediterranean Sea. While it is not B’Tselem’s role to choose between the various political options that can bring about this future, one thing is clear: none of them include continuation of the occupation.

The name B’Tselem, bestowed upon the organization by former Member of Knesset Yossi Sarid, literally means “in the image of” in Hebrew. It is taken from Genesis 1:27: “And God created humans in his image. In the image of God did He create him” and is also used as a synonym for human dignity. The name expresses the Jewish and universal moral edict to respect and protect the human rights of all people.

B’Tselem was founded in 1989 and until recently devoted most of its efforts to documenting human rights violations that come under Israel’s purview as occupying power. This included publishing statistics, testimonies, video footage and reports concerning human rights violations and their implications, in order to promote better living conditions for the occupied population – with the understanding that the occupation was to be a passing matter.

Yet after almost half a century of occupation, during which Israel’s policies in the Occupied Territories have created profound changes that indicate long-term intentions, it is clear that this reality cannot be viewed as temporary. Therefore, B’Tselem continues to document and publicize human rights violations while also exposing the injustice, violence and dispossession that lie at the very core of this regime of occupation, challenging its legitimacy in Israel and abroad and helping to expedite its end.

B’Tselem has established a strong reputation among human rights organizations in Israel and around the world. It has received various awards, including the Carter-Menil Award for Human Rights, together with Al-Haq (1989), the Danish PL Foundation Human Rights Award, together with Al-Haq (2011), and the Stockholm Human Rights Award (2014). B’Tselem’s video project was granted the British One World Media Award (2009) and the Israeli Documentary Filmmakers Forum Award (2012), among others.

B’Tselem is an independent, non-partisan organization. It is funded by donations alone, from foundations in Europe and North America that support human rights activity worldwide and from private individuals in Israel and abroad.