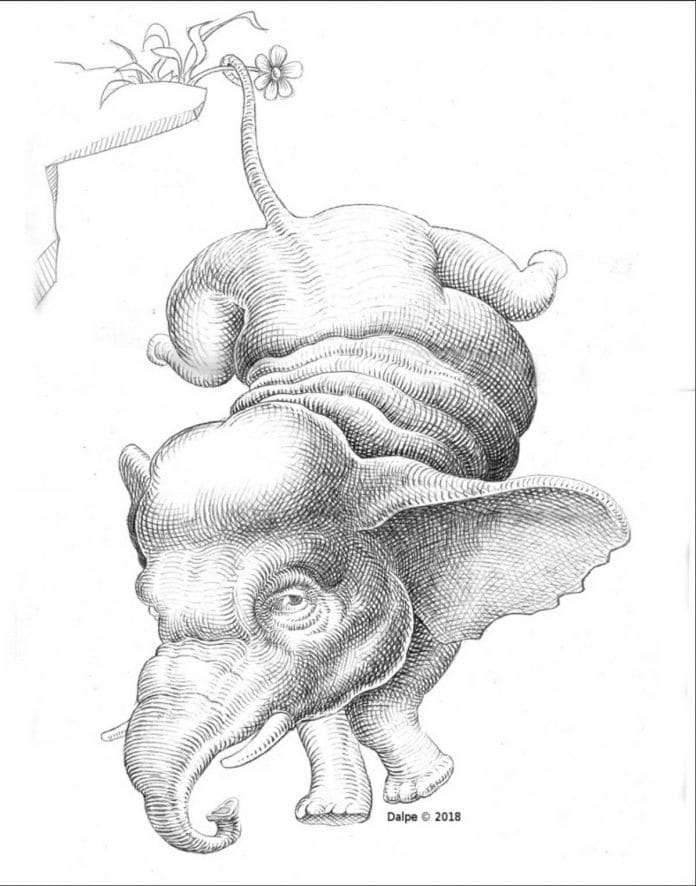 By Edmund Dalpe for Veterans Today

Incidentally, my way of thinking about how to do things is not original. That is, the dialogue between my two minds (sub and con-mind). IOWs, when I am confused about how to resolve an issue, I sleep on it. Because the sub-mind presents it in various points of view; even those vantage-points that scare the living hell out of me are entertained. Because, unlike the con-mind, or Main Stream Media for that matter, in Underland, no idea is suppressed. That’s its function; to inoculate the con-mind against silly thinking and offer possibilities as to how to proceed, with a degree of creative intelligence.

When you look at one of the smart beings, they are unremarkable in every way but one, their capacity to exploit changing environmental opportunities. That’s why they are found across the globe in almost every niche. They can quickly adapt, because they have a capacity to develop any ability. That’s also why sapiens were so successful. I stressed were, because you can hardly call perpetual war a smashing success story.

In evolutionary context, the rumpus began rather recently and abruptly, during the transition from the Pleistocene to Holocene epochs, give or take a millennium, when the earth’s climate began to thaw and all life began to flourish. It was then that sapiens decided to kick back and settle down, when they realized they no longer needed to chase the groceries from town to town.

With the more sedentary life-style, they decided it was a good idea to cooperate. You know, collective farming, that kind of thing. However, in so doing, two seminal and mutually exclusive events occurred that changed the very nature of sapiens and the rules of the game. The first event was the social aspect of its creative capacity took precedence to its more creative attributes, that began to stagnate, and thus rendered them vulnerable to predation. The second event, respective to the first, was a subspecies of sapiens, Homo Kleptomaniacs (oligarchs), capitalized on that vulnerability, and the rest as they say is civilization.

Unwittingly, by adopting this way of thinking and doing things, the more formidable aspects of their creative capacity were eclipsed, because a collective mentality favors ability, conformity and sameness, in an effort to maintain stability –tradition. This is the polar opposite of its creative nature. Unlike my creative practice, which favors a capacity to explore ideas and methods in order to exploit changing environmental opportunities, the new way of thinking was stagnant.

When they traded their creative mind for peace of mind, the shift in MO was no big deal, due to the warmer climate, when opportunities abounded. However, nature never looks favorably for too long on stagnation. Thus, periodically the rigid minded sapiens walked straight into a paradoxical wall.

BTW , sudden impact trauma is the quickest way known to inspire a dream, which is how we know the sub-mind’s (subconscious mind’s) raison d’etre; of dealing primarily with the paradoxical, i.e., life’s rich procession of SNAFUs! What mitigated a tete-a-tete between their two minds was the con-mind (conscious mind) and sub-mind no longer spoke the same language. Sapiens inadvertently relinquished ownership of the evolution of their language, because that too was a product of its more creative attributes, that went atrophied, vis-à-vis their new found cooperative strategy. Thus, the sub-mind’s council in preventing evolutionary silliness, like walking into walls, fell on deaf ears.

The one volatile ingredient I have yet to expound on, in context to this diminished capacity of homo sapiens, is Homo Kleptomaniacs. Like a fly, that can’t resist a fresh steaming pile, they smelled weakness, and exploited it to the maximum. How they seized control is obvious and the specifics are besides the point and not too interesting. Their MO has not changed since, well, forever. Let’s just say, for them, theft is like breathing.

Having secured custody of the collective knowledge, and thus its ownership and control, the long Dark Age began, when ability was substituted for our creative capacity and belief for knowledge, or more to the point, belief in knowledge, during which, not even blunt force trauma to the noggin could revive the beguiled from their collective stupor. Thus began the reign of the oligarchical social system! Hence, whenever the Leviathan bumps into the inevitable paradoxical wall, it’s a fait accompli! The mumbling mass is marched off the edge of a nearby cliff and blamed on manufactured enemies, which augments the power of the system, which in turn augments the level of destruction, rinse and repeat.

That is the very definition of the cliche, “No good deed goes unpunished!” From their good intentions to be friendly neighbors and have peace of mind, the Hoi Polloi abandoned their muchness to become the very produce they were attempting to collectively secure. It’s the art of compromise brought to its hilarious conclusion, institutionalized, and honed to a science. Sapiens are now planted, pruned, plucked, and processed, no different than asparagus. Price per pound varies according to processing methods.

That’s the history of the oligarchical system from soup to the nuts running the buffet. From which the obvious question presents itself. How do we remove ourselves from the bill of fare to avoid being the main course for an unpleasant lunching? However, the more pertinent question would be, how is it possible that each generation is transfigured into vegetables? Which is easy to explain. It’s the oldest profession in the world. No not that one, cultivation, which is the act of killing of the Dionysian. You know, weeding the human mind of those pesky flowers –imagination!

In the early stages of development, when sapiens first exhibit an independent will, toddlers are compelled to begin their linguistic training with a symbolic language; a language other than the one they were born with. By the time they reach maturity, when their mind has undergone the final stages of synaptic pruning (Wikipedia, 2014a), they are unaware that everything they did, during their most formative years, was misdirected toward dialoguing exclusively with a system. And as the sapiens’ mind operates on the principle of use it or lose it (Wikipedia, 2014b), consequently their natural language, thinking and capacity to be creative were culled, pruned, and transfigured into something unnatural, something technological, something … well, it looks human, but it’s inhumane –hybrid!

It seems that Orwell didn’t quite hit the mark. It’s not about what is or is not being said that holds sway over the human mind –Newspeak (Orwell, 2001). It’s about how they are cultivated to speak and thus think, which regulates the depth and scope of their imagination, and as their imagination is so intrinsically linked to their will, their will is likewise abridged. It’s the same with any system. If you want to cull an industry, you retract the money supply to it. Likewise, if you want an orthodox generation of compliant and docile sapiens, you restrict the arts, because creativity is the very coinage of the sapiens’ mind.

As sentient beings, immature sapiens (toddlers) are not afforded a voice, as to if they want to participate in such an invasive procedure, designed to bonsai its mind, diminish its humanity, and transfigure its muchness into a widget for usage. Children subconsciously know their development is being arrested, and they tend to act out in various ways. Like the terrible twos, when toddlers discover the dreaded not construct –FOAD!

As cultivated sapiens, adults can be just as rebellious. Because, they too are very much childlike in that regard; in wanting to develop their untapped and fallow capacity. They know they have so much more to offer than being a whoziewhatits in a whatchamacallit.

Gratefully, a bonsaied capacity is only dormant, and not completely eviscerated from the process of hybridization. The sapiens’ mind retains a level of plasticity throughout its life. Moreover, as the natural language of the sapiens’ sub-mind is beyond conscious control, and thus culling, it will remain forever feral –Dionysian. Thus, to resuscitate our creative capacity, and nurse it back to life, we need simply to reopen the dialogue.

As previously stated, we can reclaim ownership of our imagination, will and thus our actions, by bridging our two minds. The method I use to reacquaint individuals with their natural parlance, is to show how I interact with my own subterranean mind; as a prototype, a road map to our own voice, that was born to be an integral part of our being. This subterranean way of speaking is identical to what was ‘spoken’ on cave walls during the Stone-Age. Thus, dialoguing with our sub-mind, is tantamount to holding a conversation with the quintessential human being. Where else could a hybrid find such council about who and what they truly are?

Once a hybrid clears the systematic fog from its field of vision, and rediscovers its somatic syntax, they throw off their shackles, and become dangerous beings. You know, they grow a pair, they become independent, willful, excited about life, and doing outrageously courageous things, like shamelessly asking stupid questions they are not suppose to. They discover an amazing insight that was systematically driven from their con-mind, and doing things on their own steam, guided by a wandering star!

Ed’s creativity is based on conceptual art making that’s rigorous, with a tenacity and endurance. He studied art foundation at Pratt Institute and completed his BA and MFA at Goddard College. His latest work, Dream Duet, explains how to access the creative potential inherent in being human, via our sub-mind and its sub-language, that is, the First-Language.