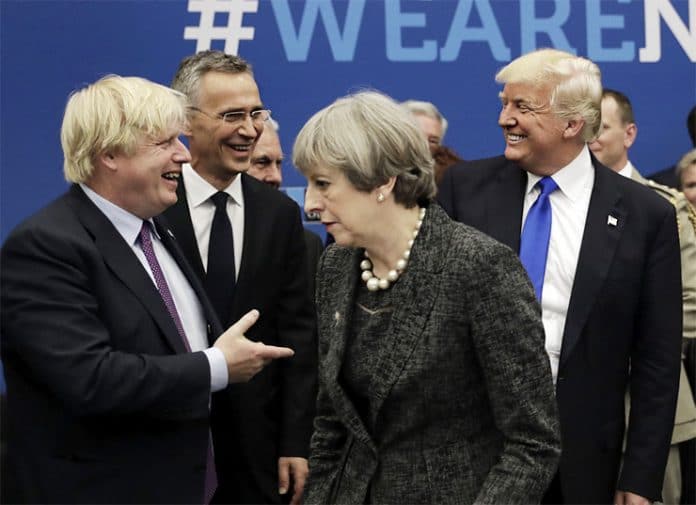 When the British Foreign Ministry announced on April 3, 2018 that there was in fact no evidence of a chemical weapon of any origin in the real or imagined incident in Salisbury, we entered a new realm of unreality.

Simply put, not only did British Foreign Minister Boris Johnson make the whole thing up, as leaders of Britain’s Labor Party are crying from the rooftops, it goes so much further.

Based on Boris Johnson’s outright lie, 24 nations expelled Russian diplomats and the US directly threatened Syrian and Russian forces fighting terrorism in the Middle East with, and we have confirmed this, attack using tactical nuclear weapons.

Russia responded immediately with a defense policy statement indicating full retaliation and America, and by “America,” we mean Donald Trump, backed down. Though the media never reported the humiliation, the military and intelligence communities know it well.

We now ask the unasked question, unasked by congress or the press; “Why isn’t there an inquiry? Why are Johnson and Trump, who nearly pushed the world to nuclear war going scott free? Why aren’t they in prison where they belong?”

Then we look back to the April 2017 US missile attack on Syria. Again, it seems Trump had no evidence, he simply acted based on information we suspect he might have gotten from a blog or podcast.

Others of us whose job it is to analyze and predict events fear that Boris Johnson and Donald Trump are puppets.

Then we look at what we have learned about the American election. It seems the trail from Cambridge Analytica leads now, according to investigations in the UK press, not only to Facebook and now 87 million hacked accounts but much further.

As Christopher Wylie has come forward, we now see not just the ties to MI6 and the CIA but Israel’s “private CIA,” called “Black Cube.”

Reports indicate that it was Black Cube that sent operatives to the US, not to “rig news” or send out critical fake emails but something far more sinister and realistic as well. America’s election was rigged, not by “fake news” but by “vote flipping,” worked out on the ground with America’s own vote rigging organization, the Federalist Society, a group of powerful and corrupt legal professionals recruited for their moral laxity and funded to guarantee utter control of America by powerful criminal elements.

The evidence was seen in 2000 and 2004 as well when exit polls varied as much as 11% from vote tallies. It wasn’t just voting software that was compromised but physical ballots as well. The mechanism for rigging elections in America has always been there and every election has been challenged, without fail, for over 200 years.

This time, however, Russia had to be blamed but for what reason? Why were hundreds, even thousands of fake news sites created in Macedonia, a story quickly suppressed and, even more telling, why were their absurd stories, such as those of children being held captive in basements of pizza restaurants, featured by Google and Facebook, drowning every search, every post.

If you went on Google to buy a hammer, Google sent you to a site smearing Hillary Clinton, sites now claimed to be Russian “hacking.” It was Google. Russia doesn’t control Google. Russia didn’t come to America and cut deals to flip votes, it was Black Cube and the US policy instituted since proves it.

Everything Trump has done has harmed Russia and benefitted Israel. If maniac, and the term applies, John Bolton, a Russia hater and longtime fanatic Zionist, becomes chief White House advisor as Trump has announced, the proof should be clear to everyone.

Israel, working through tech companies controlled by a network of intelligence groups, Cambridge Analytica, AggregateIQ (Canadian intelligence), SLC (MI6) and Black Cube (Mossad) not only rigged the US election but have rigged elections around the world. From Haaretz/Israel:

Black Cube, which was also implicated in the Harvey Weinstein scandal, was apparently hired to hack the personal data of Nigerian President Buhari prior to his election to get access to his medical records and private emails, reported multiple sources on Wylie’s testimony. He also testified that that his predecessor at Cambridge Analytica died mysteriously in a Kenyan hotel room – and may have been poisoned after a deal went ‘sour.’”

The real question is how far does it go? The charges have gone well beyond hacking. It is now blackmail, including Nigeria’s President Buhari, certainly Donald Trump and most probably Boris Johnson as well.

It is now clear that every election is interfered with in every nation and that it is being done on behalf of financial interests that, if events are analyzed, favor military conflict, social discord, human suffering and economic exploitation by global elites.

There is nothing new to this at all. Were one to throw away the popular historical narrative as though it were as fake as the current mainstream news has proven to be, one might see continuity here that runs back hundreds, perhaps many hundreds of years.

When one takes even a cursory glance at geopolitical systems and a less dogmatic view of hundreds of years, perhaps thousands, of conflicts, inexorable patterns emerge. We go beyond politics, religion and even economics, reaching into the soul of mankind and find a heart of darkness, a desire to do wrong. We find evil.

Is history that simple, a struggle between the light and the dark, good and evil, righteousness and injustice and oppression? Moreover, why is it that asking such questions, that channeling a dialog toward such basic concerns is taboo? Who made that rule? Why did we let “them?” What price are we now paying for turning away?