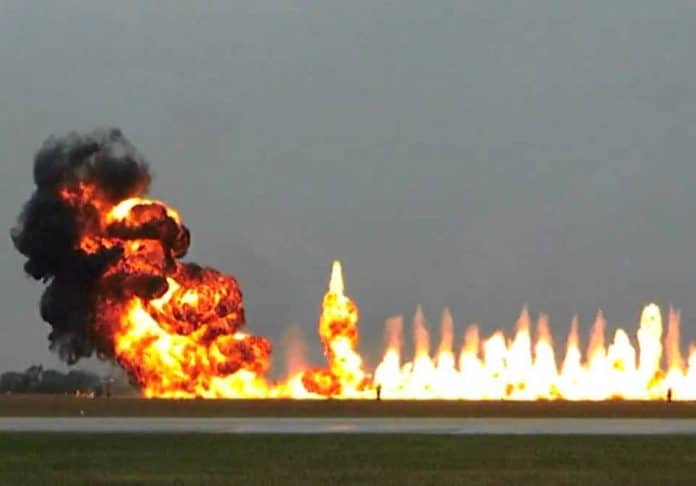 Statistics are surprising and revealing. They catalyse the truth. Estimated casualties of the ‘Shock and Awe’ launched by Bush Junior are appalling. US operations for broad spectrum dominance of West and South West Asia have caused over 1,011,000 fatalities.

If 130,000 fatalities caused by India the closest US ally in the region in occupied Kashmir are also added, the sum total shoots to 1,141,000. Mind you, these casualties do not include combatants.

Can this massacre and waste of human lives be justified on the lofty slogans of democracy, values and freedom? Just because the people of governments that perpetuate these massacres are insulated by geography, does not condone the sin. When violence strikes western cities take a pause and imagine what misery haunts the other side of the picture.

Built up on notions of liberté, égalité, fraternité, the sexed up names of these operations are Enduring Freedom, Freedom’s Sentinel, and Freedom Eagle. The US triggered war in Syria is nameless but an extension of this Freedom Syndrome.

Like the slaves of East India Company and the elites with elastic consciences more loyal than the king, there are state and non-state actors that serve the lordship. These are warlords of sorts who have their own benefits in sight. Israel participates because of greater Israel. Saudi Arabia does it for the survival of the House of Saud.

Lastly, India does it to become a super power from Cape of Good Hope to Suez to Middle East to Malacca to Central Asia. It has an impediment in Pakistan bonded to Kashmir. Hence the question of Kashmir tied to at least 14 Security Council must look like Islamic terrorism with US imprimatur.

By conservative estimates casualties according to duration of conflicts manifest a cold blooded international policy led by USA.

As I write, Indian genocide against unarmed civilians including females is reaching tragic numbers. The western controlled media is neither seeing nor listening. Kashmir accounts for over 230,000 killed since 1946. This includes the Jammu Massacre testified by a huge graveyard of the unknown martyrs.

In search of global dominance, UK that presided over the partition, USA that actively remained committed till two decades ago and UN that lives off US funding have chosen to sleep over their conscience. Let Indians kill Kashmiris as long as it keeps China and Pakistan in check.

In Palestine, over 100,000 civilians have been killed since 1948. This is a huge proportion for a very small population. Shifting of Saudi gears means more misery for Palestinians.

Because of lack of governance, there is no reliable data for casualties in Afghanistan. By conservative estimates, the Afghan conflict has caused over 300,000 casualties since Charlie Wilson’s War. Operations Enduring Freedom and Freedom Sentinel have alone caused more than 50,000 civilian fatalities. Combined Pak-Afghan figures soar to over 450,000.

Though Afghanistan and Pakistan are deemed as epicenter of terrorism, casualties in Middle East from Libya to Syria are the epicenter where killing machines are most active. Over 850,000 civilians have been killed since the dawn of Enduring Freedom. Iraq accounts for over 300,000, Syria over 500,000, Libya over 30,000 and Yemen over 11,000. Belatedly, President Trump is considering leaving Syria but the plans are mulled.

Obviously the killing machines of contractors and franchised militias will get into motion with more fury. The spinning wheels of war economy will shift to higher gears.

In this huge landmass of mayhem and genocide, ironically looking like a crescent, confusion prevails over who is against whom and who is with whom? Every conceivable state within the region from Israel, Saudi Arabia, Iran, Qatar, Jordan, Egypt, Turkey and India has a finger in the pie.

They have connections to all non-state actors from enmity to alliances of convenience. Russia steps up the heat for its own interests. It is a crisscross of loosely flying objects that sometimes collide and sometimes reinforce each other.

Nothing affects Pakistan more than what is happening in Afghanistan and Kashmir.

For over 1.5 million Afghans, Pakistan is a second home. Northwest Pakistan and Southeast Afghanistan are intertwined in history. Afghan nomads have grazing rights in Pakistan. Tensions along the border affect families living on either side. Pashtun and Gujjar populations have relatives and clans in Pakistan. The conflict inside Afghanistan directly impacts Pakistan’s economy and people.

On April 2, 2018, the US bombed a school in the Dasht-e-Archi, Kunduz killing 250 mostly children. The rain of daisy cutters, MOABs, Cruise missiles and bunker busters in no way bring democracy. These are instruments of hate and revenge for an event that had no Afghan connection. Hate will breed more hate and revenge.

Terrorism sponsored by India and facilitated by the US sponsored Afghan government into Pakistan creates instability with social ripples. ISIS camps along Pakistani and Chinese borders pose a threat to both countries. The booming drug trade in Afghanistan questions the effectiveness of US control.

Kashmir is geographically, ethnically and religiously linked to Pakistan. It is surrounded by four countries three of which are nuclear. It is larger than 103 and more populous than 129 countries. Kashmir involves eighteen million people in a time warp for over a century. Pakistan has the right of paramountcy, the legal principle of independence from Great Britain.

Even the Supreme Court of India found it strange that India should have claimed any aspects of the paramountcy exercised by the British Crown. Indian congruency in the amendments to 1935 Act, Instrument of Accession and constitutional legislation on Kashmir exposes designs for extended control of Kashmir. Since 1948, there are 10 UNSC resolutions specifically on plebiscite, negotiations and non-applicability of Indian sponsored legislations. There are four other UNSC resolutions that deal with UN observers.

Though the killing has been going on for over a century, India has intensified violence after becoming a preferred US partner in the region. It is cantankerously riding and exploiting the US mantra of terrorism against Pakistan and Kashmiris. The Guardian has called Indian ruthless reaction as the ‘first mass binding operation of the world’.

Victims of shotgun pellets now run in thousands. Indiscriminate use of tear gas and incendiaries has incinerated scores of people including women and children besides injuring hundreds. Had such atrocities been committed by a non US ally, the West would have gone hoarse yelling human rights.

American officials have insisted that India is a better ally and Pakistan must endure the Long War. The war boils down to constant Indian violence from Afghanistan and ruthless use of force against Kashmiris. There are other non-kinetic elements of this attrition constantly besieging Pakistan.

So what do we make of over 1.1 million killed in the name of western values?  As hundreds of thousands of refugees pour into Europe and USA shuts its gates; has such violence brought more peace to this world? The epicenter of terrorism is neither the Pak-Afghan Border nor Middle East. It is embedded deeply in US quest for global dominance.