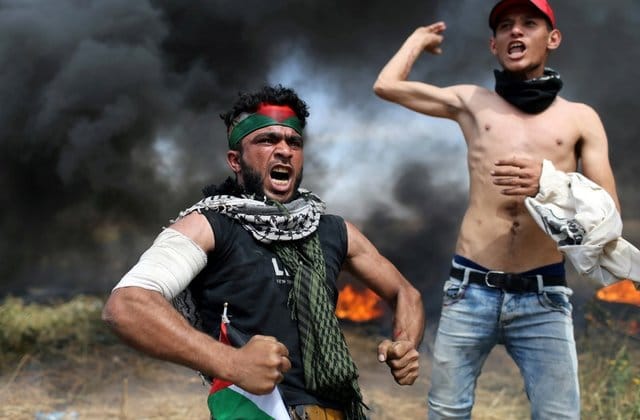 [ Editor’s Note: If what the Zionists are doing to the Gazans was being done to Israeli Jews, international Jewry would be screaming for blood, for wiping out the perpetrators. But when the shoe is on the other foot the IDF gets congratulated.

Of course it is time to sanction the Israelis, but their lackeys in many Western governments have been passing law making that illegal, at the bequest of you know who, laws that passed without much public fuss. The church groups stayed out of it, as did most of America’s civic groups.

Congressional offices got hardly any calls, so how are we to intimidate our Congressmen into not bending over for the Zios? They pay well, both in campaign donations and election labor. Many young Jews work in political campaigns as a right of passage.

In Israel’s defense I must thank it for showing restraint in not bombing or using napalm on the protesters. But as we know from the past, Israel might “be forced” to do it, to save the Jewish people from being drown in the sea, down to the last baby, or so the story goes.

Israel cannot see the potential for the wheel turning against it, but if and when it does, who will cry for a eople who did what they are doing?

The term “Zio-nazis” seemed to have been banned from publication, but I always thought it served a good purpose, to be saved for events like this to describe the shame “they” should feel, but do not … Jim W. Dean ]

UN High Commissioner for Human Rights Liz Throssell has condemned  the “deplorable”  killing of Palestinians during the Great Return March, and harshly warned Israel against further use of violence.

One man has already been killed and dozens wounded during the Friday protest, Palestinian Red Crescent told RT. It followed a major outbreak of violence a week ago, when 18 Palestinians were shot dead and hundreds injured as Israeli Defense Forces (IDF) snipers were instructed to fire at anybody who approached the border fence.

“There are strong indications that security forces used excessive force” due to the high number of casualties and the fact that those killed or wounded by Israeli fire were unarmed, Throssell said.

The spokeswoman pointed out that an attempt to approach the fence by the demonstrators “certainly does not amount to a threat to life or serious injury [to the Israeli security forces] that would justify the use of live ammunition” by the IDF troops, who had “protective gear and defensive positions.”

“In the context of a military occupation, as is the case in Gaza, the unjustified and unlawful recourse to firearms by law enforcement resulting in death may amount to a willful killing, a grave breach of the Fourth Geneva Convention,” which states that civilians in a war zone are to be protected, Throssell said.

UN Secretary-General Antonio Guterres urged “Israel to exercise extreme caution with the use of force in order to avoid casualties” in a separate statement. He reminded the Jewish State that “civilians must be able to exercise their right to demonstrate peacefully,” also calling upon the Palestinians to refrain from provocative acts.

Israel expected up to 50,000 Palestinians to protest along the border on Friday, deploying tanks and snipers to the fence. “The IDF will not allow any breach of security infrastructure or the security fence, which protects Israeli civilians. The IDF will act against those who are involved in these attacks,” according to a statement on Twitter, as the rules of engagement for Israeli troops remains unchanged.

The protesters threw stones and set thousands of car tires on fire in five hotspots along the fence. The IDF said that the black smoke from burning tires was used by the Palestinians as cover for terrorist attacks, which were prevented “with riot dispersal means… and fire in accordance with the rules of engagement.”

Washington has blamed the violence on the Palestinians. US envoy to the Middle East Jason Greenblatt said the protesters “should remain outside the 500-meter buffer zone; and should not approach the border fence in any way or any location.”

“We condemn leaders and protestors who call for violence or who send protestors — including children — to the fence, knowing that they may be injured or killed,” Greenblatt said.

The six-week-long March of Great Return marks the appropriation of Palestinian territories by Israel and the killing of six unarmed civilians by Israeli security forces on March 30, 1976. The leader of Gaza-based Hamas radical group, Khaled al-Batsh, said that the Palestinians were desperate to return to the land taken from them.

Batsh added that the rally was also a message to US President Donald Trump that the Palestinians won’t give up their rights in Jerusalem, despite the US’ decision to move its embassy in Israel to Jerusalem.