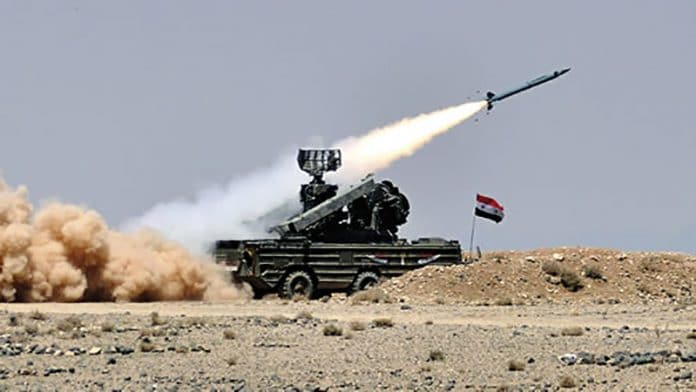 Our sources indicate that the attack was ordered personally by Donald Trump on the advice/instructions of John Bolton, Benjamin Netanyahu & Saudi Prince Salman, the latter of whom just visited Washington.

Trump & Bolton are playing a very dangerous game because they are assuming that Putin will not retaliate against Israel for fear of causing Palestinian casualties.

The excuse/rationale that will be proferred is the chemical weapons attack on Ghouta, blamed on Assad & the Russians, but in reality, as VT has reported, the work of US, Israeli, Saudi & NATO specialists.

One or more of the ‘massive’ explosions in Homs may have been a tactical nuke, we are waiting for confirmation on this.

We have also received suggestions from sources inside the US military that a mutiny is in the offing and that a Trump order to go to war with Russia would be met with a ‘fuck you, we’re not going to war with Russia over Israel’. Trump has not a single friend in the Pentagon.

Even worse for Trump and his cronies, we have long been aware that there are major factions with the US military that would love nothing better than to see the Russians kick Israeli ass, to do to Israel what they have done to the Middle East.

We are awaiting further material to be passed to us and we will report further developments ASAP.

BEIRUT, LEBANON (11:27 A.M.) – Reports have been circulating that Hezbollah and Iranian military personnel were among some of the casualties suffered in an Israeli missile strike against the Syrian T-4 airbase on very early Monday morning.

According to the Russian military, the strike saw Israeli F-15’s fire eight cruise missiles at the T-4 site of which five were intercepted by Syrian air defenses before hitting their intended marks – the remaining 3 missiles are said to have struck the western part of the military airport.

Up to fourteen military personnel, including Iranians, present at the T-4 airbase may have been killed in the missile attack says a report from the Syrian Observatory for Human Rights.

The T-4 military airport has been long thought to house Iranian and Hezbollah assets and infrastructures. Israeli forces have struck the base at least two times before based on this notion.

According to the Russian MoD, two Israeli F-15 warplanes were involved in the attack against Syria’s T-4 military airport, having fired missiles at the site from Lebanese airspace.

Furthermore, the Russian MoD claims that eight missiles were fired by Israeli aircraft (compared to earlier reports of 20 missiles being used in the attack) of which Syrian air defense units were able to intercept five; of the three missiles that did reach the T-4 airbase, all struck its western side.

With the US and France having denied any involvement in the attack, and Russia and Syria pinning the blame on Israel, Israeli military authorities are, for their part, still yet to comment on the strikes.

BEIRUT, LEBANON (9:29 A.M.) – The French military has just issued an official statement saying that it was not involved in the recent missile strikes against the Syrian T-4 airbase in eastern Homs province.

This development comes amid talks between US and French diplomatic authorities for possible joint military action against Syrian government targets in response to an alleged chemical attack.

Although unconfirmed, there exists strong suspicions that the missile barrage which struck the T-4 airbase around midnight on Monday was carried out by Israeli warplanes.

US military authorities have since denied carrying out any attack against Syrian targets ‘at this time.’

According to the army source, the attack is believed have been carried out by the Israeli Air Force, as the missiles were fired from the Lebanese border.

Initially, the Syrian state media reported it was cruise missiles from the Mediterranean that struck the T-4 Military Airport; however, the army later confirmed that 20 missiles were fired from the Lebanese border.

Of the 20 missiles fired at the T-4 Airport, at least eight of them were intercepted by the Syrian Air Defense, the army added.

Israel has not yet claimed responsibility for the attack, but the Syrian military believes they are behind this morning’s attack on the T-4 Airport.

BEIRUT, LEBANON (7:49 A.M.) – According to Syrian Digital Media, up to twenty cruise missiles may have been fired at the Syrian military’s T-4 airbase in eastern Homs province on the night of Sunday to Monday.

The same source added that personnel at the T-4 airbase were warned at least five minutes before the first impacts and that a number of missiles struck positions in and around the military installation.

As mentioned earlier, the Syrian military claims to have intercepted eight missiles without stating how many were fired at the T-4 site as part of the total salvo.

Although still unofficial, it appears that the missile strike was conducted by Israeli warplanes via Lebanese airspace; this suspicion is reinforced by the fact that Israeli forces have attacked the T-4 airbase before due to the reported presence of Hezbollah and Iranian assets at it.

A military airport in Homs province has been targeted in a “missile attack,” SANA reports. Although Syrian air defense systems allegedly intercepted at least eight projectiles, several people were reportedly injured and killed.

At least eight missiles were launched at Syria’s T-4 air base in the east of Homs province, SANA reports, citing a military source. According to the agency, the attack has “probably” been carried out by the United States.

There are several “martyrs and wounded” as a result of the strike, SANA added, without specifying the number of casualties.

While the US Defense Department is “aware” of reports of an alleged missile strike, it has dismissed the reports of any US involvement.

“At this time, the Department of Defense is not conducting air strikes in Syria,” the Pentagon told Reuters in a statement. “However, we continue to closely watch the situation and support the ongoing diplomatic efforts to hold those who use chemical weapons, in Syria and otherwise, accountable.”

According to Lebanon’s Al Mayadeen broadcaster, the missiles were coming from the Mediterranean Sea, through Lebanese airspace. Meanwhile, Al Masdar News is reporting that “unknown jets” have entered Syrian airspace from Lebanon, and is speculating that the jets could be Israeli. In response, the Syrian Air Defense system at Mezzeh Air Base was activated, the report added.

The missile attack, which took place several hours ago very early on Monday morning, targeted the T-4 military airport in eastern Homs province; although still unofficial, it is believed that Israeli was responsible for the attack.

The Syrian military claims that eight of the missiles fired at the T-4 airbase were intercepted by air defense units; the total number of missiles used in the attack is not known.

Israel has attacked the T-4 airbase at least two times before; the airbase is believed to house Hezbollah and Iranian military assets and infrastructures.

A recent report from the Syrian Arab News Agency (SANA) claimed that it was cruise missiles that struck the T-4 Military Airport in the eastern countryside of the Homs Governorate.

Al-Masdar originally reported from a source in Damascus that it was unknown jets from Lebanon that targeted this area; however, the Syrian state media is reporting the source of the explosions were cruise missiles.

If cruise missiles were deployed, the entity behind the attack would most likely be the U.S. military.

The Syrian Air Defense managed to shoot down several missiles that were targeting the T-4 Military Airport in the eastern countryside of Damascus.

According to a Syrian military source in Damascus, the Syrian Air Defense shot down at least eight missiles that were targeting the T-4 Airport.

The source of the attack is still being determined; however, it is very likely an Israeli strike.

Israel has attacked the T-4 area in the past, as it has a large presence of Hezbollah and Iranian military personnel.

Massive explosions were heard in the eastern countryside of the Homs Governorate, tonight, after unknown jets entered Syrian airspace from Lebanon.

According to a military source in Damascus, the Syrian Air Defense system was deployed from the Mezzeh Air Base after the jets entered Syria from Lebanon’s Beqa’a Valley.

Some early reports indicate that the jets were Israeli, as this is the route they usually take before bombing the Syrian military.

There is still no confirmation regarding the cause of the blasts or if the warplanes were Israeli or U.S.

U.S. President Donald Trump recently said that the Syrian government will “pay a price” for the reported Douma attacks; however, there has been no word from Damascus that these explosions were caused by U.S. airstrikes.

Pentagon officials have reportedly denied attacking the T-4 Airport in eastern Homs after reports emerged about massive explosions at this installation.

BREAKING: Pentagon officials deny that US has launched attack against Assad regime airbase.

However, the state-owned Syrian Arab News Agency (SANA) reported shortly after that the source of the attack was cruise missiles.