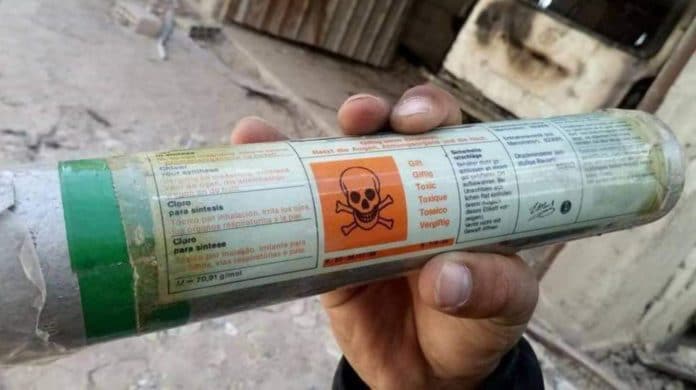 [ Editor’s Note: VT has long covered the “aiding and abetting” of terrorists by the US coalition, and by derivation NATO, for some time. We view its going on unchecked as a major national security threat to all countries.

Unfortunately Western corporate media, with financial resources far beyond VT, has played Mickey the Dunce on this whole story – the case usually being that the respective country intelligence agencies have warned them to stay away from it all, or suffer the consequences.

VT has also followed closely the long series of false flag chemical weapons attacks, both sarin and military-grade chlorine because we knew the Syrians would never be so stupid as to hand their heads to the US Coalition in a silver platter by doing something with no chance of any gain, but exactly the opposite.

We were also concerned that the longer “they” got away with doing this, the more innocent people would be murdered by the alleged protectors of freedom and democracy in the world, but who we know to be currently among the worst enemies of mankind.

Unfortunately, despite our best labors, the citizens of these countries have done almost nothing to hold those accountable in their own countries.

Now that might have changed, with our long pleadings for the Syrians to give us photographic proof of the chemical weapons assets they have been capturing – serial numbers and all – so we could cram it down the throats of the guilty, thinking maybe someone inside the respective countries might want to start asking some hard questions.

The flurry of military accidents also caught our attention, as we know historically that this method is used by the military to hide overseas combat deaths for which any public investigation would be embarrassing.

In Vietnam, if a thousand of our troops were lost in one week, the announcement would be spread out, the families lied to. Welcome to the dark underside of America.

The impending attack on Damascus by the US was partially due to what the SAA might uncover in East Ghouta; and because they were able to move fast, they overran the US Coalition’s chemical weapons operations faster than anyone thought possible.

Our pleading with Syria has been rewarded with these new photos. The SAA has US Coalition chemical weapons officers in custody; and Russia has told the US, Brits, Israelis, and Saudis that they will have to deal with Damascus.

How long US media and our own Congress can pretend they know nothing about who some of the major terrorist elements are that most are afraid to mention? Their house of cards is crumbling, and “they” will be more dangerous in that situation, as we are talking about some serious crimes here.

We are suspicious of why the Brits would throw together what appears to us to have been a sloppy false flag, even to use against Russia, for putting Russia’s feet in the fire to get the Brits people back from Syria and keep this story out of major news distribution.

Is now the time for some of the really guilty to have to pay the piper? We shall see. But for that to happen, what is left of non-compromised public institutions has to step up to the plate, when they have shown a hesitancy to do so when their countries really needed them.

We hope they will get to see this and start asking the obvious questions… Jim W. Dean ]

Today another chemical weapons stockpile was found in East Ghouta, produced in Germany, fully weaponized and commercially produced by Merck.

Merck was the primary producer of chemical weapons for Germany in World War I and George Merck founded the War Research Service along with Frank Olson in 1944, which using captured Germany and Japanese scientists and research facilities, took control of America’s biological and chemical warfare production which continues to this day in facilities at Fort Meade, Maryland and at the Lugar Lab in Tibilisi, Georgia in partnership with the current government of Ukraine.

[ Editor’s Note: Sure, this canister has “smoke colored” staring out at us. For those who think we did not see that, what do you think Intel operatives do when they are moving banned weapons around, label them as Vx or Military grade chlorine or whatever? No, they just put them into a camouflage container in case someone is taking a quick peek at a shipment. Used ones are even better, as they look like old stock being shipped out to a third-world conflict.

As for what these could be used for – how about for throwing into a cellar filled with human-shield, pro-Damascus family members to generate a nice pile of bodies for our “un-free” Western media?

We are still waiting for the first verifiable report of a jihadi and/or family that has been killed by one of these “attacks”, or a cemetery of the gassed martyrs, or even a headstone for such. The amateur script writers forgot about that part.

Of course, experienced Western journalists and all the professional Intel people have been aware of this; but how many have come forward for the people to blow the lid off this gassing hoax garbage when it is so obvious? Even if they were not involved, they are now stained for going along with it.

If they did not have any of this stuff, they could just do a Hollywood chemical-weapons attack, the kind where you see White Helmet people dealing with “victims” without even wearing any kind of face mask… Jim W. Dean ]

“The Syrian Arab Army and with the help of Russian captured a shipment of chemical weapons destined for the Eastern Ghouta. These were British weapons produced at Porton Down in Salisbury.

Russian suspects that the Skripal incident is related as by their records, Skiripal was working at Porton Down as a chemical weapons trafficker in partnership with a Ukrainian firm. Russia denies attacking Skripal but admits he was under surveillance for his activities involving support of terrorism in Syria and arms trafficking.

Russia also confirms that there are British, American, Israeli and Saudi intelligence officers who were caught by the Syrian army in one of the heavily fortified operations rooms during the invasion of the Syrian army and its allies of the East Ghouta.”

VT asked the Syrian government for serial numbers and closeup photographs of chemical weapons used. Syria sent them to us today.

Today, the Syrian Army captured the following German made poison gas shells, shipped into Syria though Ukraine and Turkey and delivered to Jeish al Islam by a US CH53 helicopter, according to statements “allegedly” gotten from POW interrogations. 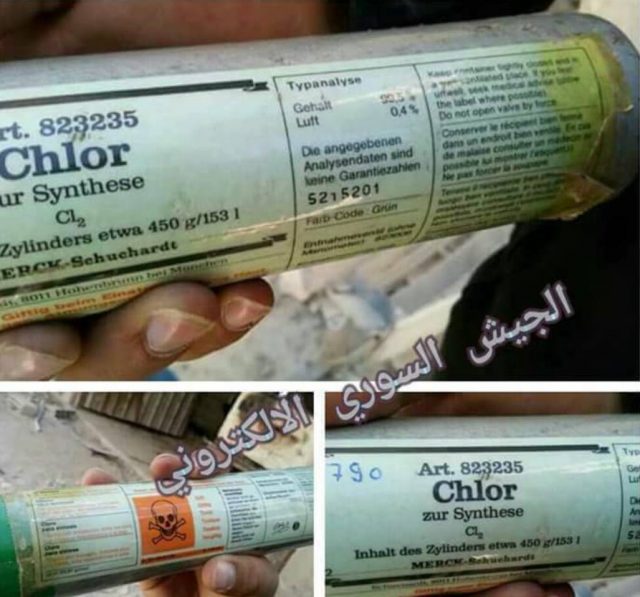 American, British and Israeli military personnel captured in Syria have confirmed they were ordered to stage chemical attacks in East Ghouta by their governments. 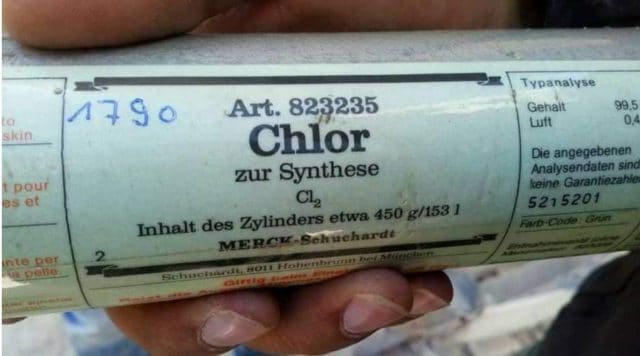 The Americans are still being held along with Israeli’s while British prisoners are being negotiated for. Sources in Damascus told us that representatives of Oman in Damascus approached the Russian Office of Reconciliation on behalf of Britain for the return of British chemical warfare personnel.

The shells in the above video are identified as VX gas from British stockpiles.

Russian officials in Syria informed Britain through Oman that they would have to directly deal with Syria for the return of their personnel. We have received no further information since, Damascus has remained silent on how or if negotiations were proceeding.

We do know that US Representative Tulsi Gabbard of Hawaii, a US Army combat veteran of Iraq, met with both President Assad and Donald Trump, in order to arrange for covert exchange, for substantial financial consideration, of captured Americans.

“met with both President Assad and Donald Trump, in order to arrange for covert exchange, for substantial financial consideration, of captured Americans”.

She says “There is absolutely no basis or fact behind this statement and it needs to be removed immediately.”

The recent gas attack in Syria, timed as the last terrorists were surrendering for relocation inside the Douma region of the Ghouta pocket, was planned personally by nominated presidential advisor John Bolton and President Donald Trump personally, according to highly placed sources.

Our sources in Russia, highest level, told us the attack was coming based on information they received from US and Israeli prisoners taken in East Ghouta after an evacuation attempt failed.

US casualty announcements in this effort have been released over the past few days as happening in other areas to cover US complicity in terrorism. This dishonors families of the dead, not just in the misuse of service members to support terrorism but in lying to families about combat deaths. This shame goes directly to coward Trump!

“The loss of our Marines weighs heavy on our hearts,” Maj. Gen. Mark Wise, commanding general of 3rd MAW, said in a statement.
“Our priority is to provide support for our families and HMH-465 during this critical time.”

Other US casualties were listed as a US Air Force F16 that allegedly crashed at Nellis Air Force Base in Nevada and up to 6 Americans who the US claims were killed by “Kurdish forces” in the north of Syria.

All died in a failed combined US/Israel rescue operation to remove not only communications and command personnel but also chemical weapons operations teams as well.

Last week, VT Damascus received evidence that Americans, US Army Special Forces along with Israeli chemical weapons officers had been captured in East Ghouta. We were told that not only was a command facility captured with modern weapons but a stockpile of British made 81mm poison gas mortar shells, numbering in the hundreds, was seized as well.

Video’s were viewed by former MOD weapons specialists who identified the green stripe on the shells seized in East Ghouta as VX gas from British stockpiles.

The Obama administration investigated alleged chemical attacks in 2012 and 2013 and advised Syria to turn over chemical stockpiles as a way of discouraging terrorists from continuing to stage chemical attacks to blame on Damascus.

Most efforts had their roots in Britain’s MI6 and its affiliates, the Syrian Observatory for Human Rights and the White Helmets.

The US is currently facing combined military operations against its occupied zone in Syria by Iraq, Syrian and Russian forces. The US has been told to remove forces from Syria or face a wider conflict.

The US and Russia have been at war against one another inside Syria for about a month now.