Editor’s note: I love this article’s duplicitous headline. We badly need a Campaign Against [Antisemitism Duplicity]. In fact, the very term antisemitism is, in its current usage, duplicitous. But this headline correctly parses as [Campaign Against Antisemitism] Duplicity. The CAA, it turns out (surprise surprise) are a bunch of duplicitous CAADs. They lie about pretty much everything—most importantly, the fact that they are not loyal Brits, but agents of a genocidal foreign power. – Kevin Barrett, Veterans Today editor

On Sunday 8th April the Israel pressure group CAA held a protest outside Labour Party headquarters, which they claimed, was against anti-Semitism. CAA had been requested not to go ahead with the protest by the Board of Deputies of British Jews, the Jewish Leadership Council and the Jewish Chronicle because “8th April is superfluous and disunity in the community” reported by CAA themselves.

I watched the demonstration and heard the speeches on the live feed – what did I see? I saw an Israeli pressure group hiding behind a Union flag, conveying a ‘British patriotic image’ whilst at the same time campaigning to suppress that most precious of British values, political tolerance. I am told that there was a white van parked nearby with hundreds of Union flags inside it, which were being distributed to the participants.

To me, it became clear that giving every protestor a Union flag was an act of gross deception by CAA, in order to mask the presence of the pro Israel agenda. This agenda was exposed when at the end of the speeches Mr Gideon Falter asked the crowd to turn around and face the camera behind them for a group photograph.

Mr Falter then specifically instructed people to hold up ONLY the placard for one photograph and then for a second photograph he asked people to ONLY hold up the Union flag. Gideon Falter himself then experienced some bad luck as this screenshot taken from the live feed shows him clearly on the stage with the Israeli flag behind him. 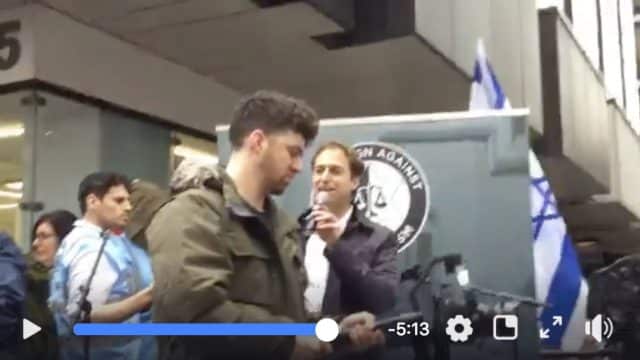 The CAA were crowdfunding over the last week as they tried to raise £5,000 for placards, a sound system and advertising in the Jewish press. No doubt that attending CAA demonstrations could be a costly pastime at a rough cost of £20 per head based on estimated numbers by the Mirror of the 250 who turned up.

We then have to ask another question, when this group which pretends to represent British Jews how does it actually reflect on British Jews when CAA pressure and DEMANDS a major British political party to act to their satisfaction by disciplining Jeremy Corbyn for (they claim) bringing the party into disrepute?

How many of the attendees were actually Tories?

The one speaker, David Abrahams who claimed to either be or have actually been a member of the Labour Party was very rudely booed off stage when he said he was not there to speak out against Jeremy Corbyn or Labour but to speak about anti-Semitism.

The answer of course is that it reflects very badly, which is why only approximately 250 people turned up. The numbers reported here in the Mirror.

Compare this to the CAA website which reports that 2,500 people turned up to demonstrate.

The question we are left with is …. If the CAA are duplicitous enough to simply add a zero to the number of protestors, how valid are their statistics about the rise of anti-Semitism?