The UN Security Council met on Monday to discuss the latest security developments in Syria, in particular the alleged chemical attack in Douma and the airstrikes that followed.

The meeting was called to bring attention to local, national and international groups already engaged in armed confrontations or at risk of escalating confrontations, said Staffan de Mistura, the UN Special Envoy to Syria.

“Recent developments carry more than ever before” the danger of triggering the multiple “fault lines in the Middle East,” which could lead to “absolutely devastating consequences, which are difficult to even imagine,” the official said, underscoring the possibility that the war in Syria may spiral into a larger international security crisis.

Regarding the alleged chemical gas attack over the weekend in the country, “The United Nations is unable to independently verify or attribute responsibility for this attack, but we call on all parties to show utmost restraint and avoid any further escalation or confrontation,” de Mistura said.

US President Donald Trump has already accepted the chemical attacks as a given. It’s worth noting that Monday is the first day of work for new White House National Security Adviser John Bolton, a noted war-hawk. 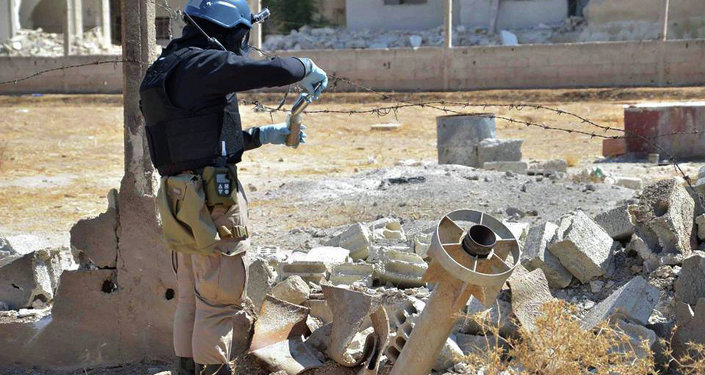 Pentagon Chief: US Has No Evidence Damascus Used Sarin Gas in Chemical Attacks

A little more than one year ago, on April 7, 2017, Trump authorized striking Syria’s Shayrat Airbase with 59 Tomahawk missiles in response to an alleged chemical attack April 4 in Khan Shaykun, a town in the Idlib Governorate.

Sunday night, nearly a year later to the day, Israeli warplanes launched missiles at targets within Syrian borders, the Russian and Syrian governments have said, calling that use of force “unacceptable.”

The alleged attacks in Douma have been worked into a coordinated campaign against Russia by the US, the UK and France, which have “unpardonably threatened” Moscow, Russian Ambassador to the UN Vasily Nebenzya said. ​”The leadership of the United States, of the United Kingdom and of France, without any justifications and without considering the consequences have engaged in a confrontational policy against Russia and Syria and they are prompting others to follow suit.”

The US has led the charge to hasty conclusions about chemical weapons being used in Syria, apparently without questioning why Syrian President Bashar al-Assad, who is winning the war in his country, would see such an attack as helpful to his cause, Nebenzya commented. As experts have noted, leaders attack civilians when they are desperate, but Assad is not desperate.

Leaders in France and the United Kingdom have largely adopted the same stance as the US, Nebenzya said. The NATO allies have unquestionably placed culpability for violence on the Syrian “regime” without asking why it would be strategic or beneficial to do so, he noted.

If the US takes military action against Syria under false pretenses, it will lead to “grave repercussions,” the envoy said.

The Russian envoy called for the Organization for the Prohibition of Chemical Weapons (OPCW) investigative team to conduct a thorough inquiry surrounding the allegations of chemical weapon use, saying these teams could be escorted by Russian and Syrian forces as soon as Tuesday.

UK Envoy Karen Pierce expressed interest in pursuing this course of action. “I was very interested to hear the Russian offer that OPCW fact-finding mission could visit and would have the protection of Russian forces. Mr. President, I believe that this is an offer worth pursuing but it would of course be necessary for the OPCW mission to have complete freedom of action and freedom of access,” Pierce said. 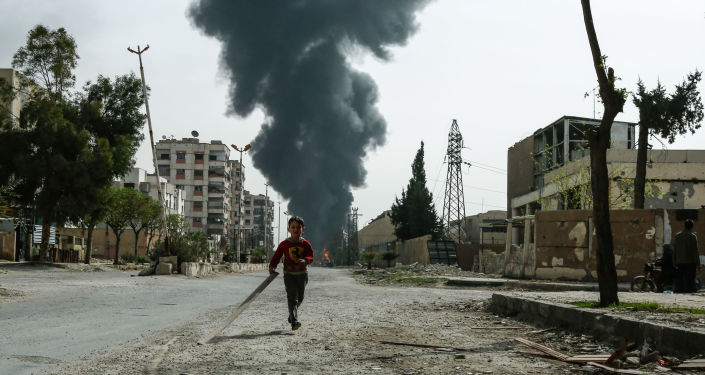 UN Consultant: ‘We See Contradictory Signs on What Could Be US Stance on Syria’

“The fake news on Saturday from Douma is geared toward drawing the attention of society away from the Skripal case, which was muddled up by London, and throwing on Russia completely unconfirmed accusations with the aim of pulling solidarity to build an anti-Russian alliance,” Nebenzya said.

The Syrian envoy pointed out that while the US may speak of admirable aims and claim moral high ground, one should consider whether the US contribution to Syria has been to provide food and milk for Syrian children or to supply weapons to militants responsible for killing the Syrian people.

US Ambassador to the UN Nikki Haley stated, “I could hold up pictures of babies lying dead next to their mothers, in their diapers, all lying together, dead, ashen blue, open eyed and lifeless, white foam bubbling from their mouths and noses” concerning the so-called chemical attack. She claimed that the use of chemical weapons in Syria and around the world is becoming “normalized.”

“We are at the edge of a dangerous precipice,” the diplomat said. “We have reached the moment where the world must see justice done.”

“History will record this as the moment when the Security Council either discharged its duty or demonstrated its utter and complete failure to protect the people of Syria,” Haley said. “Either way, the United States will respond.”

Trump on Possible Military Action in Syria: ‘Nothing is off the Table’

US President Donald Trump said that the United States will make a major decision as to what action it may take in Syria after reports about the emergence of the latest chemical weapon attack against civilians.

Trump said the administration will make a decision within the next 24 to 48 hours, according to a White House press pool report.

“This is about humanity and it can not be allowed to happen,” Trump was quoted as saying by the report.

The specialists inspected the location where the purported attack took place. However, no evidence has been found to prove such claim.

Russian Foreign Minister, Sergey Lavrov, confirmed that no proof has been yet found to condemn the Syrian government of a chemical attack in the rebel bastion.

Jaysh al-Islam claimed that dozens – including civilians – have been killed last Saturday when the Syrian Army attacked the city of Douma with rockets that contain poisonous gas.

BEIRUT, LEBANON (8:45 P.M.) – The Russian military has found no evidence that chemical weapons were used by any party in the east Damascus district city of Douma according the Russian Ministry of Defence.

A statement by the Russian MoD claims that the reported site of the alleged chemical attack attack in Douma was assessed by military specialists and that no trace of any chemical weapons usage was found.

The Russian MoD added that photos released by the White Helmets (a self-declared civil rescue organization only found in areas of Syria held by jihadist militants) depicting victims of the alleged chemical attack were clearly ‘fake.’

On Saturday afternoon, Islamist rebels in Douma accused the Syrian military of attacking the city’s residents with chemical weapons; the claim has since gained traction in the Western world with the US and French heads of state now threatening a possible counter-strike in response to the supposed attack.

How the 5G coronavirus conspiracy theory tore through the internet