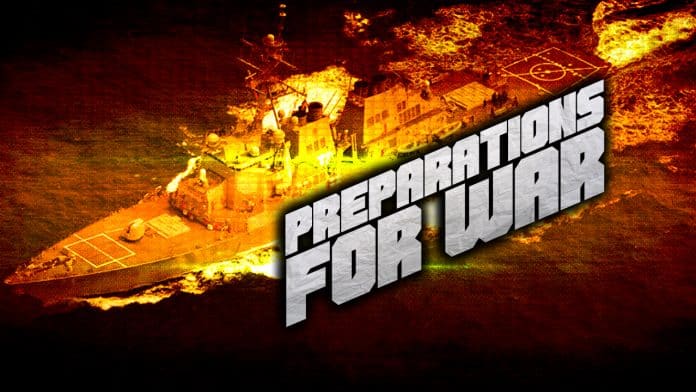 The US Navy is creating a strike group with hundreds of Tomahawk cruise missiles for a possible attack on Syria.

The USS Donald Cook has already drawn attention to its actions in the eastern Mediterranean where it has reportedly been “harassed” by Russian warplanes.

Considering that the USS Georgia and USS John Warner nuclear submarines are also deployed in the region, the US Navy could have about 406 Tomahawks to use for its attack on the Assad government.

On April 11, the USS Harry S. Truman Carrier Strike Group is set to depart Naval Station Norfolk for deployment in the Middle East and Europe. The strike group includes the guided-missile cruiser USS Normandy and the guided-missile destroyers USS Arleigh Burke, USS Bulkeley, USS Forrest Sherman and USS Farragut. The destroyers USS Jason Dunham and USS The Sullivans will join the strike group later.
If the attack on Syria does not take place in the coming days, the USS Harry S. Truman will further strengthen the US offensive capabilities for a possible large-scale invasion against the Assad government and thus Russian and Iranian forces deployed in Syria.

SF recalls that on April 10, US President Donald Trump canceled his trip to South America. According to White House Press Secretary Sarah Huckabee Sanders, he “will remain in the United States to oversee the American response to Syria and to monitor developments around the world.”

It looks like Russia is not happy to see such developments. On April 10, a Russian Su-34 fighter jet armed with what looks like Kh-35 cruise anti-ship missiles was photographed over the Syrian city of Tartus, where the Russian naval facility is located. According to local sources, this was not the only Russian jet armed with Kh-35 cruise missiles flying in the area.

Russia’s envoy to the European Union told Euronews on the same day that “Russia has warned U.S. representatives, publicly as well as through proper channels, over the grave consequences that could arise if these strikes happen and whether deliberately or otherwise Russian citizens are hurt.”

Meanwhile, the UN Security Council failed to approve three draft resolutions on chemical weapons attacks. Russia vetoed a US text, while two Russian-drafted resolutions did not get nine votes to pass.

Russia’s Permanent Representative to the UN Vasily Nebenzya also revealed that the Organization for the Prohibition of Chemical Weapons will send two expert teams to Syria later this week to investigate the April 7 Douma incident, which the US-led bloc seeks to use as a pretext for a military action against Syria.

However, the chances of a military escalation still remain high.