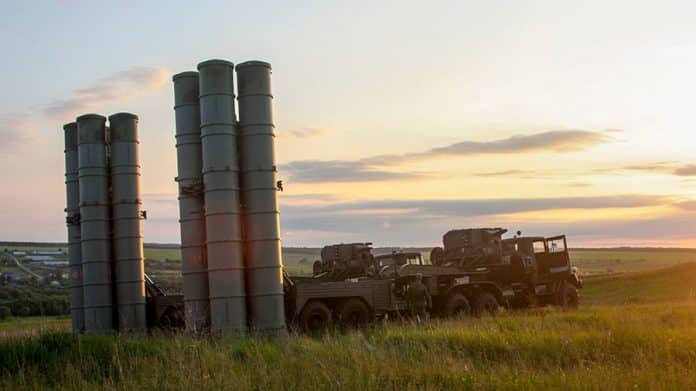 [ Editor’s Note: The S-300s are a game-changer primarily for the Israelis. If deliveries of these start up again to Syria, it will also be a Russian signal to Israel that attacks on Damascus using Lebanon will be contested.

While the air-defense missile batteries might be SAA-manned and -controlled, the radar and target selection will be centralized over a secure network, probably a Russian one to protect it from electronic warfare. The best way to kill an air defense is by taking its communications down.

I picked up from an English-subtitled Russian program today that Syria had 40 Pantsir AA systems, but they were being used for defending high-value targets.

The biggest anomaly we have in the US-Russian reporting was the number of airbases that were also targeted. The Russians reported that several had no missiles get through to them. The US announced three target hits, and just left the others out.

The screwup there is the US claim that 76 missiles were sent in to take out the empty research facility, which is ridiculous. So it appears that it placed the shot down missiles at that location, which, if true, will have a motherload of missile debris left behind.

From the video footage below, it shows no vehicles on the facility, and in the debris, none of your typical, office-facility furniture and endless paperwork and files that would be scattered and blowing all over.

If Russia wants to, it can publish the tracking of every incoming missile. We are already getting video and photos of some of the downed missiles. You can rest assured that the Russians are already working to learn how the missiles that got through, did so … Jim W. Dean ]

“I would like to note that a few years ago, taking into account a pressing request of some of our Western partners, we stopped supplying S-300 air defense systems to Syria,” Rudskoy said. But given the latest developments, Moscow believes it is “possible to return to mulling over the issue, and not only with regard to Syria but also to other states as well.”

Following the barrage of missiles aimed at “military and civilian”infrastructure, Damascus intercepted 71 out of 103 projectiles.

Syrian air defense systems S-125, S-200, Buk, and Kvadrat were involved in the operation to thwart the missile strike. The weapons date back to the times of the Cold War, as they “were manufactured in the Soviet Union,” the general added.

Below is what the research facility looked like after taking the most missile hits.

Syrian air defenses did all they could to protect the country. Ruptly footage shows surface-to-air missiles responding to the “one-time” strike on Damascus.

The offensive in retaliation to the alleged Assad-orchestrated chemical attack in Douma on April 7 came just hours before the UN’s Organisation for the Prohibition of Chemical Weapons (OPCW) experts were scheduled to visit the site on Saturday to determine whether chemical weapons had been used there last week.

Russia and Iran slammed the strikes as a clear violation of international law and said it would only contribute to more chaos in the region. Syrian President Bashar Assad said that Washington and the West simply realized they lost control and credibility in the conflict.