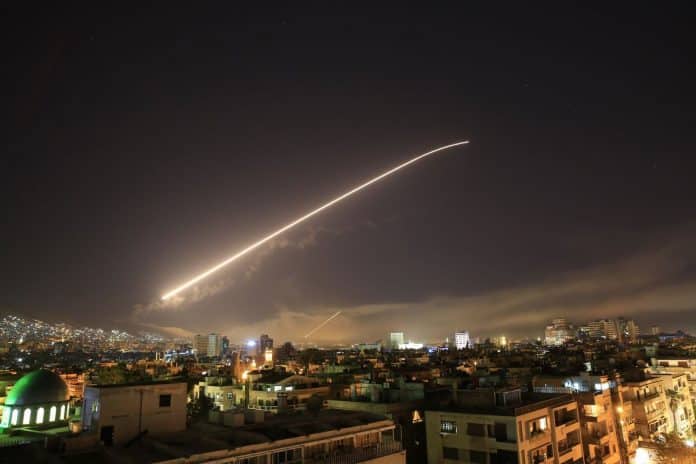 The most important news in the press conference of the Deputy Chief of the Russian Staff: 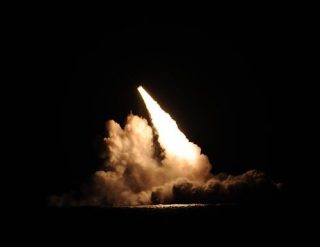 [ Editor’s Note: This is a Google translation from the original Russian report. The Russians are very good at counting; and everyone knows, including the US coalition, that the Moscow has the technical ability to track every launch from beginning to end.

On the flip side, I am still a little shocked at this morning’s Pentagon report that “no missiles were intercepted”… seen here in this Southfront report.

This claim is beyond shocking. Maybe what is left of the downed missiles can be collected and shipped to the US to be put on display for a day on the street outside the UN so Nikki Haley can see them on the way in to work. Or maybe they could be put on the Pentagon lawn for a day…

Reuters quoted an unnamed Syrian official as saying that the targeted sites had earlier been evacuated upon Russia’s warning. “We have absorbed the strike,” he said. “We had an early warning of the strike from the Russians … and all military bases were evacuated a few days ago.”

So we are left with US’ silly claim that it destroyed the Syrian chemical weapons program, which Syria did not have and does not need, with the result being that the Pentagon opened the door for Russia moving S-300s into Syria, with virtual US permission, as it claims the Syrians have zero air defense.

Dear Pentagon, who shot down the Israeli plane, then? Please riddle me that. 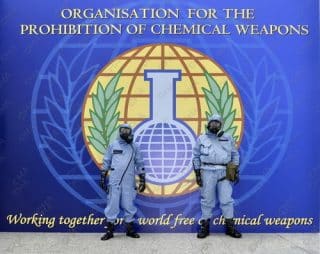 And last, the OPCW announced it will continue its work of trying to verify if there was a chemical attack and where it was posed as happening.

The Pentagon has already hinted as to how it would spin a “no evidence exists” finding. It said that “after all this time any evidence could have dissipated”.

It should have talked to the Ghouta hospital medical people first and remembered the OPCW, as they are skilled in picking up trace elements. I had a mass spectograph in my prep school chemistry lab back in 1966.

The lame Pentagon attempt also showed its ignoring the video evidence and the testimony of the medics who treated the smoke-and-dust inhalation victims from a bombing that night.

This is the usual pattern of the US spin machine, where it simply treats all evidence that conflicts with its version as though it does not exist. This would not be possible without the assistance of the US media in not asking the right questions like we do here at VT. Maybe that is because they do not want to be banned from Fakebook … Jim W. Dean ]

Russian radar and air defense systems in the bases of Hameimim and Tartus were used to detect the American and British missiles and follow their course from the moment of launch of aircraft and warships and British warplanes Tornado above the average and from US aircraft F15 , F16 and strategic bombers B1-B from above the base Altnp occupied by US forces on Syrian territory (which I demanded the bombing started immediately after the start of the aggression on us with land-to-ground missiles) and Tomahawk missiles from warships in the Red Sea Labon & Montarie.

(French aircraft did not participate in the aggression)

The strikes were directed at the military airports, the scientific center and the manufacturing sites. According to the data, there are no casualties between civilians and military personnel.

Russian Federation has recently helped the Syrian Arab Republic rebuild its air defense systems, which have largely destroyed the Takfiri terror and at the urging of our Western partners, we have asked Syria to provide it with S-300 air defense systems. But today, we will reconsider this issue not only with regard to To supply Syria with this system, but to provide other countries (sleep, our strategic allies) ……..

18 rockets were fired at Bli airport and all were dropped.

9 rockets were fired at the unmanned Mezze airport, 5 of which were dropped.

16 rockets were fired at Homs, 13 of which were dropped. There were no significant losses to these two aircraft and were limited to material.

30 missiles were fired at the residential areas of Barzeh and Jirmana on facilities that the aggression states claimed had research centers and chemical weapons production plants. Seven of these rockets were dropped and the targeted places of equipment and persons were vacated for a long time.

We confirm that there are no weapons centers or factories
No rockets were fired into the Russian air defenses at the Hameimim and Tartous …
Our base was established in Hameim and Tartous in the state of alert and war and our warplane is flying in the Syrian airspace.

The Russian Ministry of Defense believes that this British-American aggression, which coincided with the arrival of the experts of the Organization for the Prohibition of Chemical Weapons to verify what happened in Duma, aims to disrupt the work of this committee and prevent it from uncovering the truth.

On the other hand, it is a response to the successes achieved by the Syrian Arab Army in eradicating savage Tkfiri terrorism The armed man supported by these two countries … The general situation in Damascus is calm and you can be sure through our screens that convey the picture directly from there.