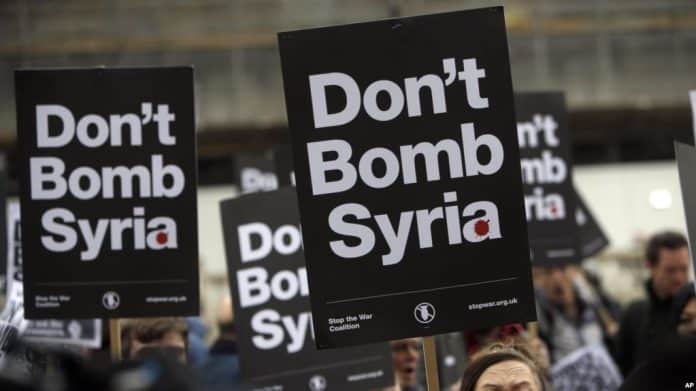 Update: The Pentagon this morning stated that none of its missiles were shot down, a bad joke which the Russian surveillance tracking of the firing positions and incoming tracking of the missiles should show, if they show it. JD

Editor’s Note: Press TV caught me on short notice to do their live coverage on the US attack on Syria, a pitiful abuse of America military power. But fortunately the attack seems to have been put on for show.

The US and British planes attacked three locations, which I can assure you Damascus knew were on the list, and had been evacuated for more than a week. Dunford explained how the targets had been chosen to avoid civilian casualties.

Mattis and Dunford also replied to press pool questions about concerns about “releasing chemical weapons” via a strike, and that for example the Scientific Research Center had been chosen to destroy its equipment and files. So we are to assume that if Syria had been doing chemical weapons research, it would not have made a back up copy?

Later when pressured by the press pool to be more specific about what chemicals the brass was talking about, they slipped up and mentioned chlorine, and “maybe” sarin. They goofed.

Chlorine does not require a Scientific Research Facility to make, as it has been around a long time. VT published the captured jihadi facility story in East Ghouta, which was a bare bones operation. The US coalition seems to have not minded its jihadi allies having and using chemical weapons. Imagine that.

Dear Generals, The Syrians might have already moved their chlorine production to the jihadi facility the SAA captured in East Ghouta with US equipment, because frankly, the price was reasonable and that would be the last place you would look for it, right?

No mention was made of French planes flying, but the British Tornados were credited with the Homs area “precursors” depot. Color me suspicious, as the Tornados have the radar signature of a metal whale, so it would be difficult to get four of them through the Russian radar, even as the Syrian batteries would be shooting.

The big elephant in the room once again was what was Syria’s motive for using chemical weapons in the latest alleged attack? Neither the generals nor the press would touch that question, continuing the long marathon race not to.

My conclusion is that fortunately this attack was much to do about nothing, a fake attack about a fake gassing by three countries needing a nice diversion from their various domestic difficulties.

France has strikes rolling across the country; the British middle class is being reduced to serfdom; and Trump has a small army of lawyers handling his many problems, the latest with his personal attorney facing criminal charges.

The generals promised a more detailed briefing in the morning. They even made a parting joke before exiting, to beware the disinformation that would be coming out from the Syrian and Russians. You just can’t make this stuff up…JD ]

“In response to the very serious situation in Syria, the following activities have been organised for SATURDAY 14TH APRIL 2018:

– Street stall/vigil at Bridgegate, Irvine: 10am – 11am – organised by Scottish CND and Ayrshire CND.

– Street stall/vigil at The Cross, Kilmarnock: 1130am – 1230pm – organised by Scottish CND and Ayrshire CND.