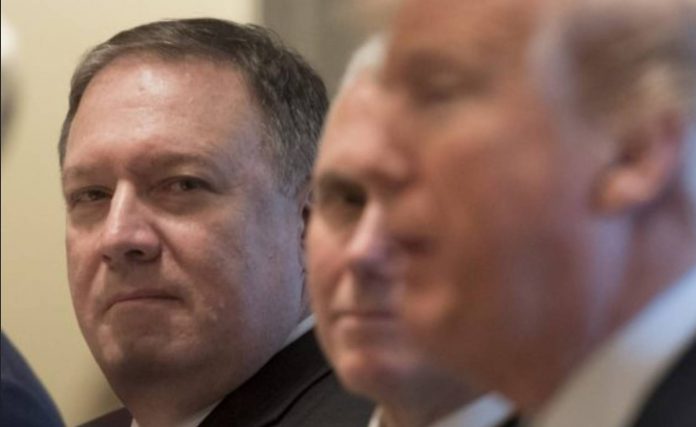 On April 11, one of the “smartest” US presidents ever tweeted: “Russia vows to shoot down any and all missiles fired at Syria. Get ready Russia, because they will be coming, nice and new and ‘smart!’ You shouldn’t be partners with a Gas Killing Animal who kills his people and enjoys it!”

When Donald Trump’s advisers drew his attention to the fact that he might have telegraphed his intentions of bombing Syria to Moscow, the imbecile came up with an even more childish tweet the next day, saying: “Never said when an attack on Syria would take place. Could be very soon or not so soon at all! In any event, the United States, under my Administration, has done a great job of ridding the region of ISIS. Where is our Thank you America?”

Fact of the matter is that during the last week, Donald Trump has been so distracted by the FBI’s raid on the office of his attorney Michael Cohen and the release of former FBI director James Comey’s new, tell-all book that he has paid scant attention to what has happened in Syria. He kept fulminating about these two issues throughout the last week on his Twitter timeline and mentioned the alleged Douma chemical attack in Syria on April 7 only in the passing. 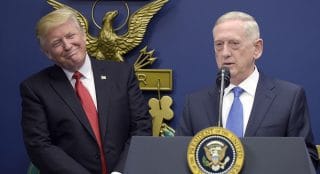 Even though Trump’s babysitter Defense Secretary James Mattis admitted on the record that though he was sure chlorine was used in the attack in Douma, Syria, he was not sure who carried out the attack and whether any other toxic chemical agent, particularly sarin, was used in the attack. If chlorine can be classified as a chemical weapon, then how is one supposed to categorize white phosphorous which was used by the US military in large quantities in its battle against the Islamic State in Raqqa?

Despite scant evidence as to the use of chemical weapons or the party responsible for it, Donald Trump ordered another cruise missiles strike in Syria on Saturday in collaboration with Theresa May’s government in the UK and Emmanuel Macron’s administration in France. The strike took place a little over a year after a similar cruise missiles strikes on al-Shayrat airfield on April 6 last year, after an alleged chemical weapons attack in Khan Sheikhoun, that accomplished nothing.

Both these strikes in Syria were not only illegal under international law but also under American laws. While striking the Islamic State targets in Iraq and Syria, Washington availed itself of the war on terror provisions in the US laws, known as the Authorization for the Use of Military Force (AUMF), but those laws do not give the president the power to order strikes against the Syrian government targets without the approval of the US Congress which has the sole authority to declare war.

The Intercept has recently reported [1] that the Trump administration has derived the authority to strike the Syrian government targets based on a “Top Secret” memorandum of the Office of Legal Counsel that even the US Congress can’t see. Complying with the norms of transparency and rule of law have never been the strong points of American democracy, but the new US administration has done away with even the pretense of accountability and checks and balances.

What further defies explanation for the Saturday’s strikes against a scientific research facility in the Barzeh district of Damascus and two alleged chemical weapons storage facilities in Homs is the fact that Donald Trump has already announced [2] that the process of withdrawal of US troops from Syria must begin before the midterm US elections slated for November. If the Trump administration is to retain the Republican majority in the Congress, it will have to show something tangible to its voters, particularly in Syria.

Thus, it appears that the “one-off strike in Syria,” as articulated by James Mattis, was nothing more than a diversionary tactic to distract attention from Trump’s domestic troubles. Rather than deterring the Syrian government from its alleged use of chemical weapons, the Saturday’s cruise missiles strikes were meant as a show of force against Moscow.

On March 4, Sergei Skripal, a Russian double agent working for the British foreign intelligence service, and his daughter Yulia were found unconscious on a public bench outside a shopping center in Salisbury. A week later, another Russian exile Nikolai Glushkov was found dead in his London home and police has launched a murder investigation into his death.

Skripal was recruited by the British MI6 in 1995, and before his arrest in Russia in December 2004, he was alleged to have blown the cover of scores of Russian secret agents. He was released in a spy swap deal in 2010 and was allowed to settle in Salisbury. Theresa May’s government has concluded that Skripal and his daughter were poisoned with a Moscow-made, military-grade nerve agent, Novichok.

On April 9, Yulia Skripal was discharged from hospital and reportedly the condition of Sergei Skripal is also improving rapidly, which means they might not have been poisoned by Novichok. In fact, Russia’s Foreign Minister Sergei Lavrov shared the results [3] of a Swiss laboratory on Saturday that “BZ toxin” was used in the Salisbury poisoning which was never produced in Russia, but was in service in the US, UK and other NATO states.

Nevertheless, the US, UK and European nations expelled scores of Russian diplomats and the Trump administration ordered the closure of Russian consulate in Seattle. In a retaliatory move, Kremlin also expelled a similar number of American, British and European diplomats, and ordered the closure of American consulate in Saint Petersburg. The relations between Moscow and Western powers have reached their lowest ebb since the break-up of Soviet Union and the end of the Cold War in December 1991.

The fact that out of 105 total cruise missiles deployed in the Saturday’s strikes in Syria, 85 were launched by the US, 12 by France and 8 by the UK aircraft shows that the strikes were nothing more than a show of force by a “powerful and assertive” US president who regards the interests of his European allies as his own, particularly when he has given a May 12 deadline to his European allies to “improve and strengthen” the Iran nuclear deal, otherwise he has threatened to walk out of the pact in order to please Israel’s lobby in Washington.

[2] Trump says US will withdraw from Syria ‘very soon’: