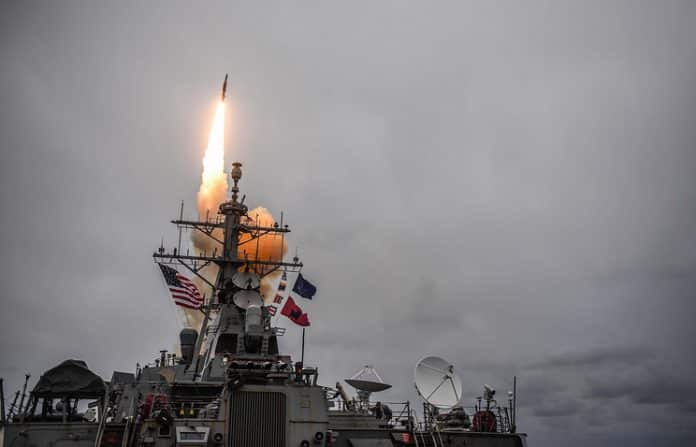 Decisive Failure of US Forces

[ Editor’s Note: In a perfect world an air defense system would have strong enough radar to target and launch its defensive missiles soon after their launch to reduce the incoming attacking missiles so the counter warfare technology and begin making its picks and battery assignments

What are the chances that the Russians would not take this opportunity to supply its defensive command and control to the Syria batteries? I would say zero, as it is the heart of an air defense.

What we learned today is some of the US weaknesses, which it handed over on a silver platter.  We suspect that the targets that shot down all incoming missiles had the Pantsirs saving the day once inside its range. If that is the case Damascus should be showing the remains of the 20 missiles in claims to have shot down.

I spotted on one of the night time video clips what looked like a short but heavy artillery barrage, but it was a swarm of missiles hitting the Research Facility outside Damascus.

I counted about 15 hits in around 6 to 7 seconds. That was some hellacious coordination of multiple platform launches to all arrive at almost the same time. Could that have been a volley of glide bombs from a B2? I have no idea, but Russia will certainly be looking into all this very carefully… Jim W. Dean ]

Early on April 14, the US, France and the UK carried out a massive missile strike on Syria justifying their actions with the alleged involvement of the Assad government into the April 7 Douma “chemical attack”.

The Russian Defense Minsitry stated that 103 cruise and air-to-surface missiles were launched on different targets across Syria adding that 71 of them were intercepted by the Syrian Air Defense Forces (SADF).

Rudskoi said that the SADF had used its S-125, S-200, Buk, Kvadrat and Osa air defense systems to repel the strike.

The Syrian General Command said that the US, the UK and France had launched 110 missiles also adding that most of them were intercepted. The numbers provided raise serious questions.

Some experts contacted by SouthFront said that even theoretically the SADF had not been capable to shoot down more than 15-20% of the launched missiles using its S-125, S-200, Buk, Kvadrat and Osa systems only.

The SADF just does not have enough means and measures to intercept such a number of missiles simultaneously in one striking wave. So what really happened?

The experts suggested that the Russian military had possibly used its state-of-the-art electronic warfare (EW) systems to counter the launched missiles during their final phase of flight path.

The missiles impacted by EW systems start to steer off. The missiles’ speed significantly reduces and they become an easy target for air defense systems or fall.

Another factor, which “highly likely” contributed to the effectiveness of the Syrian counter-measures, is that Russia had provided the Syrian military with operational data from its technical reconnaissance net, including satellites and other surveillance means.

Likely, Iran had done a similar thing. Thus, missiles launched from the Red Sea were detected immediately and were being tracked during all their flight path.

In any case, the 71 intercepted missiles of 103 launched are a decisive failure for the US and its allies. No doubts, the US military leadership did not expect this scenario.

If the data provided by the Russian Defense Ministry is confirmed, this will be the first time in the history when some side was able to repel a massive strike of the so-called modern high-precision weapons/missiles.

So, in a case of a nuclear exchange between the US and Russia, the Russians will be able to intercept most of the US attacking means suffering a minor damage. Russia’s nuclear strike would be a crushing blow.

So far [13:15 CET], the US has provided no comments on reports about the 71 downed missiles and has not even provided official info about the targets and weapons involved in its strike on Syria. Considering that the administration of US President Donald Trump likes “PR moves”, such a stance may be described as an idication that something “went wrong”.

UPDATE: The Pentagon provided own version of events by saying that all the missiles “successfully hit every target”.

UPDATE 2: On April 15, former head of the Armaments Department of the Russian Defense supported this EW warfare impact version in own remarks to the Russian TV channel Tsargrad.

UPDATE 3: Reports appear that the US military is about to launch an internal probe into the issue. MORE DETAILS