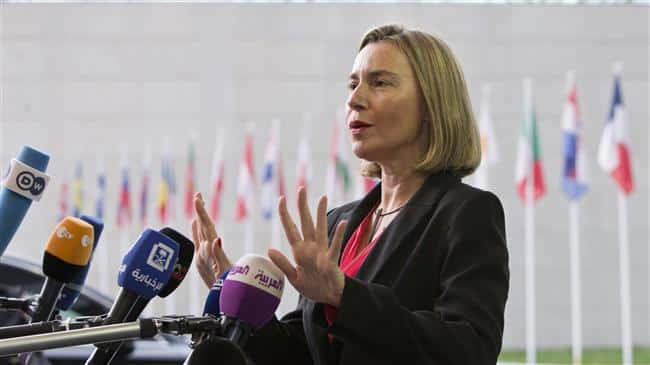 [ Editor’s Note: The EU has given Trump a blow to his attempts to intimidate the EU into “renegotiating” the Iran deal by adding new sanctions. Mogherini has said she expects none to come out of the EU foreign ministers meeting.

She went even further by stating that non JCPOA sanction are already in place with Iran, and that preserving the deal was vital. So she  is painting Trump into a corner of being the deal wrecker, as last we heard, Britain was still on board.

I would suspect that one of Israel’s first assignment for it new sleeper agent in the Whitehouse is to wreck the Iran deal at all cost with Bolton leading the charge. Iran has hinted that it would stick with the deal even if the US backed out, as long as everyone else stayed in.

Trump has waffled on a number things with the list growing almost weekly, with the last two being his wanting to get back into the TIPS trade agreement, and then his wanting to but $60 billion back out of the huge stimulus bill recently passed.

The politicians are screaming in revolt over pulling pork barrel spending back in a big election year, which will make constituents howl.

But in the world of unilateralism in which we now live, even Mr. Macron of France can reveal to us that he has found invisible ink on the UN Charter that gives the US, Britain and France the right to attack member nations without an unanimous Security Council vote.

Macron added to the that new boast that he changed Trump’s mind about leaving American troops in Syria for the long term. You just can’t make this stuff up … Jim W. Dean ]

The European Union has reiterated its strong and unequivocal commitment to the full implementation of the 2015 nuclear agreement with Iran by all sides, saying preserving the deal is vital.

US President Donald Trump is a stern critic of the nuclear deal, officially known as the Joint Comprehensive Plan of Action (JCPOA), reached between Iran and the five permanent members of the UN Security Council — the United States, France, Britain, China, Russia – plus Germany. Under the agreement, nuclear-related sanctions put in place against Iran were lifted in exchange for curbs on Tehran’s nuclear program.

The US president on January 12 reluctantly agreed to waive sanctions against Iran that were lifted as part of the landmark deal, but threatened to withdraw from the accord if some “disastrous flaws” were not fixed.

He said he wanted America’s European allies to use the 120-day period before sanctions relief again came up for renewal to agree to tougher measures and new  conditions; otherwise Washington would pull out of the deal.

Mogherini further pointed to the May 12 “deadline” and said, ” We are doing all we can to work with our American friends to make sure that all parties stay fully committed to the full implementation of the agreement, as it is the case so far.”

She once again confirmed Iran’s full compliance with its nuclear commitments under the JCPOA, saying that the International Atomic Energy Agency (IAEA) has also verified the country’s adherence to the deal in 10 reports.

Since the JCPOA Implementation Day in January 2016, the IAEA has been monitoring Iran’s compliance with its nuclear-related commitments under the nuclear deal and has consistently verified the Islamic Republic’s compliance.

In a speech to a quarterly meeting of the IAEA’s Board of Governors in Vienna in March, Director General of the UN nuclear agency, Yukiya Amano, once again confirmed Iran’s compliance with the 2015 nuclear agreement, warning that any collapse of the deal would be a “great loss.”

“As of today, I can state that Iran is implementing its nuclear-related commitments…If the JCPOA were to fail, it would be a great loss for nuclear verification and for multilateralism,” Amano added. Mogherini also emphasized that preserving the IAEA’s credibility was “crucial” and said, “Work is ongoing and we believe it would be essential to stay united in this.”

She added that the EU did not foresee any decision to impose new sanctions against Iran on Monday.

“As you know, we have already sanctions in place on Iran; non-nuclear related. I do not expect [EU foreign] ministers to take decision on this today,” the EU foreign policy chief said.

Iran’s nuclear chief said earlier this month that it would be humiliating for Europe to follow suit with the US policy on the JCPOA.

When asked about the possible reaction of the European countries in case the US president decides to quit the nuclear accord with Iran, Salehi said,

“This is a very complicated question in political terms and needs extensive analysis…. Suffice to say that it will be politically derogatory for Europe to follow the US policy on the JCPOA” unquestioningly, because it proves that European countries lack independence in their decision-making process.