A Hezbollah milita media unit shortly afterward stated that Syrian air defenses intercepted three missiles that targeted the Dumayr airport in northeast Damascus. Reports of that attack had been swirling on social media before the announcement. 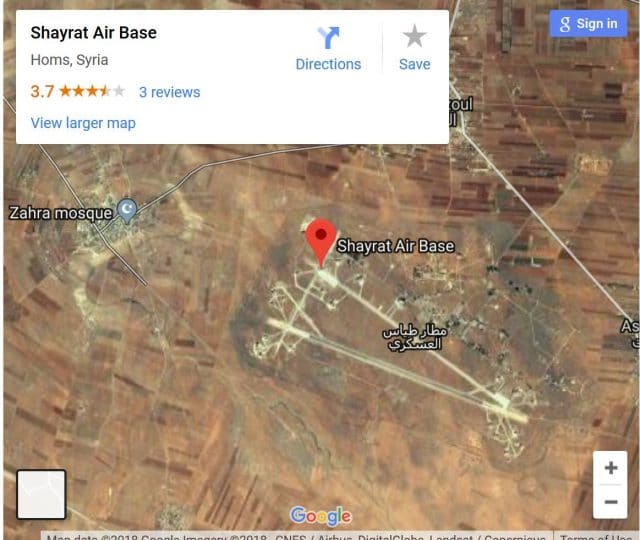 Up to 10 missiles were destroyed by the Syrian Armed Forces, a military source told Sputnik. The Syrian air defenses managed to intercept some of the projectiles, according to a SANA reporter. Meanwhile, the Al Mayadeen news outlet is claiming that all the projectiles were intercepted and inflicted no physical damage or casualties at the targeted Syrian base.

Syrian news agency SANA stated that “Syrian air defense shot down missiles which violated airspace over Homs.” The agency did not indicate the source of the strike, but later said no casualties or material damage had been reported as a result of it. Social media reports are pointing the finger at Israel for the strikes.

“There is no US military activity in that area at this time,” Eric Pahond, a Pentagon spokesman said when asked about the strike in Homs. “We do not have additional details to provide.”

A local reporter for The Arab News said Israeli warplanes were spotted in Syrian airspace just before the missiles were reported.

The raid in Homs countryside reportedly coincided with another missile attack against a military airbase near Damascus. According to various Arabic media channels, three missiles targeted Al Dumayr airport, but they were all allegedly downed by the Syrian air defenses.

According to yet unconfirmed reports, the missiles entered Syrian airspace from Lebanon, which may indicate that the Israeli Air Force could have been involved, Al-Masdar News reports, citing a military source. The outlet’s reporter also published several videos allegedly showing the launch of interceptor missiles.

Israel, which hardly ever acknowledges its raids inside Syria, failed to comment on its alleged involvement. “We don’t comment on such reports,” an Israeli military spokesman told Reuters. The US Department of Defense spokesman, meanwhile, told Sky News Arabia that there are “a lot of players” in the region who could have carried out the Tuesday morning attack in Syria.

While it remains unclear who launched the attack, the reported strike comes just days after Washington, London and Paris carried out a coordinated strike in Syria in the early hours of Saturday morning. It also comes roughly a week after two Israeli F-15 fighters targeted another Syria’s airbase in Homs province, Tiyas (also known as T-4 Airbase).