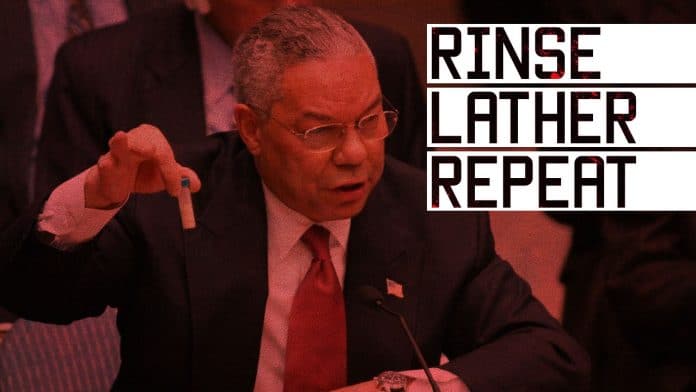 Recently, rumors and provocations have become the main, if not the only, instrument of the so-called US-led bloc to justify its aggressive and two-faced policy around the world.

On April 14, the US, the UK and France delivered a massive missile strike on Syria describing their actions as a response to the alleged chemical attack in the town of Douma.

According to mainstream media (MSM) quoting local “activists” linked to Douma militants, about 50-70 people were killed and up to 1000 were injured in the alleged attack.

At first, the so-called “international community” blamed Iran, Russia and Bashar Assad’s “regime” without providing any evidence confirming this claim. As always, all the accusations were based only on reports from pro-militant sources.

On April 9, a missile attack hit the T4 air base in Syria further fueling the escalation. According to the Russian military, the attack was conducted by two Israeli F-15 warplanes.

The entire chain of events was triggered by a series of unconfirmed social media messages and allegations of pro-militant sources.

Who needs credible evidence if there are such usefully timed posts in the social media and “local media outlets” affiliated with militants?

On April 7, when the alleged attack took place, Douma was already completely encircled and besieged by the Syrian Army. Jaish al-Islam, which was the main militant group in Douma, and its allies had no chance of winning the battle for the town. On April 8, the militants officially accepted an evacuation agreement and agreed to withdraw from the area to other militant-held parts of Syria.

First, “regime forces” attacked “Douma’s defenders” with the toxic gas. Second, these “defenders” agreed on the evacuation.  Apparently they were not afraid that the “Assad regime” would poison their evacuation buses with some toxic agent.

But there is a remarkable coincidence here.

On April 3, the US President Donald Trump was going to pull the American troops out of Syria. The president’s words were at odds with the rest of Washington. The MSM and the establishment made no bones of its opposition to this plan.

However, after the Douma incident, the US military will obviously recall its “moral obligations” to stay in the occupied territories in northern and eastern Syria to defend them from the regime, which constantly uses chemical weapons.

About a year ago, almost the same scenario was observed over the Khan Sheikhoun incident.

On March 30, 2017 US Ambassador to the UN Nikki Haley stated that the regime change in Syria was no longer the goal of the US foreign policy.

On April 4, the “bloody dictator” Assad allegedly committed the chemical attack in Khan Sheikhoun, killing at least 74 people, according to “local activists” linked to militant groups operating in the area.

Without conducting any investigation, the so-called international community concluded that “the Assad regime” had been behind this attack.

On April 7, the US struck the Syrian Air Force’s Shayrat Air Base with cruise missiles. According to Washington, the “Assad regime” had used this airbase to conduct its Khan Sheikhoun attack.

Like the Douma incident, the chemical attack in Khan Sheikhoun took place when militants were in full retreat, this time in northern Hama. However, the “dictator Assad” broke bad and decided to use the chemical weapon in the eyes of all the international community.

The “international investigation” of the Khan Sheikhoun incident was mainly based on pro-militant sources and “open-source research”. UN-OPCW investigators did not visit the place of the alleged attack and disregarded almost all the inconsistencies in the “Assad did it” version.

To sum up: Assad’s “bloody regime” committed two chemical attacks against civilians within a year. Both times the chemical weapons were used without any military purpose, amid or ahead of the important diplomatic or military events related to Syria.

On March 4, the Russian ex-spy Sergei Skripal and his daughter Yulia were poisoned in the UK by the alleged nerve agent Novichok. London rushed to accuse Russia of being behind the poisoning, but refused to provide any evidence besides “Russians did it”.

The initial claim of the UK Foreign Office that the nerve agent’s origin was identified as Russia was just revealed to be a pure lie. In early April “deadly poisoned” Sergei Skripal revived after this incredibly powerful chemical agent.

Nonetheless, the UK, the US and their “allies” used the incident to expel Russian diplomats and to increase a diplomatic and media pressure on Moscow.

As usual, it is a foregone conclusion who would be “highly likely” blamed in this “international investigation”. It is as if the US-led bloc is satisfied to take the British “gentlemen” at their word.

The МSM narrative says that this is just a chain of coincidences, which only unmasks the “evil” face of the West’s opponents at the international scene. But there is a clear pattern in all three cases: