Home Investigations Russia: Douma Open to Press, Says Trump/May Lied
Share
Twitter
Pinterest
WhatsApp
Linkedin
ReddIt
Email
Print
Tumblr
Digg
Editor’s note:  Theresa  May admits her intelligence on Syria came from the same social media that helped hack the Brexit vote and US election, now a project we are told headed by John Bolton who is replacing Steve Bannon as “Goebbels” to Trump’s Hitler. Does this make May “Mussolini?” … Gordon Duff
–
*
[ Editor’s note 2: See how Macron got nailed with some on that Institutionalized resistance leadership I have been talking about. The cameras got him in profile with these EU Parliament protests in a wide shot, knowing it would make the front page. Macron in going to bleed politically on this now, as he should, and so should May…Jim W. Dean ]
– 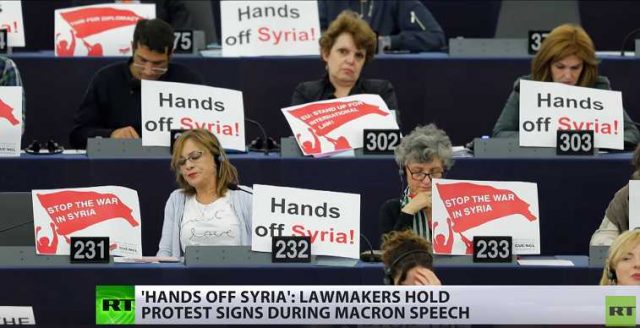 After speaking with eyewitnesses on the ground in Syria, even mainstream media are beginning to cast doubt on the West’s narrative of an alleged gas attack in Douma, as medics tell French, German and UK media it never happened.

Agence France-Presse (AFP), the world’s third largest news agency, and the Independent, a British online newspaper, have each published stories that question whether chlorine or any other chemical was used against Syrians in Eastern Ghouta on April 7.

In a French language video report, AFP spoke with Marwan Jaber, a medical student who witnessed the aftermath of the alleged attack.

@AFP translates the words of a doctor in Douma who confirms that on that fateful day nobody came into the hospital with symptoms of a chemical attack. This directly contradicts the words of the French President.  https://t.co/vbfP58yZUppic.twitter.com/rL1sepuc24

“Some of [the victims] suffered from asthma and pulmonary inflammation. They received routine treatment and some were even sent home,” Jaber told AFP. “They showed no symptoms of a chemical attack. But some foreigners entered while we were in a state of chaos and sprinkled people with water, and some of them were even filming it.” 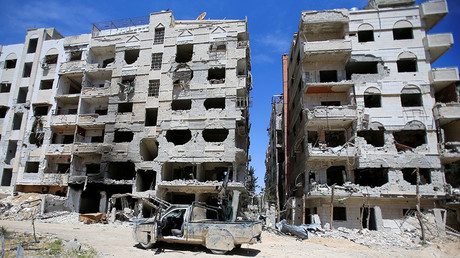 Jaber’s testimony is consistent with claims made by a Douma doctor who spoke with veteran UK journalist Robert Fisk. Although Dr. Assim Rahaibani did not personally witness what happened in the medical clinic, he said that “all the doctors” he works with “know what happened.”

According to Rahaibani, intense shelling had created dust clouds that seeped into the basements and cellars where people lived. “People began to arrive here suffering from hypoxia, oxygen loss. Then someone at the door, a ‘White Helmet’, shouted ‘Gas!’, and a panic began. People started throwing water over each other. Yes, the video was filmed here, it is genuine, but what you see are people suffering from hypoxia – not gas poisoning.”

Writing in the Independent, Fisk noted that locals he spoke with “never believed in” the gas attack stories – and that tales of President Bashar Assad’s chemical atrocities had been spread by armed Islamist groups who had imprisoned and enslaved thousands of people in Ghouta before the town was liberated by Syrian forces in April.

Meanwhile, a report aired by the German RTL Group-owned channel n-tv says it’s unclear whether the attack took place at all, given that most of the locals told them on camera they didn’t smell any chemicals at all, one local told them he remembers a “weird smell” and was fine after a glass of water, and one man, who didn’t want to show his face, insisted there was a “smell of chlorine.”

However, a local doctor told the channel: “Saturday, a week ago, we treated people with breathing problems, but chlorine or gas poisoning – no, those are different symptoms.”

The German broadcaster @ntvde interviewed a doctor working in the hospital in Duma:”There were no patients with symptoms of a chemical gas attack!” pic.twitter.com/wctxv50Gl6

All of these stories published by different outlets corroborate testimony from two men who appeared in the “gas attack” footage spread far and wide by western media and governments. Interviewed by the Russian military, the two men said they were unknowing accomplices in the gas attack ruse.

“We were working and did not pay attention to who was filming us,” the first eyewitness said. “They were filming us, and then a man came in and started screaming that this was a chemical attack…People got scared and started spraying each other with water and using inhalers. Doctors told us that there was no chemical poisoning.”

Doctors and medical workers questioned by the Russian Center for Reconciliation confirmed that there had been no reports of patients suffering from chemical poisoning in Douma during the timeframe of the alleged gas attack.

The French and British media reports seem to contradict statements made by Paris and London, which have both stated unequivocally that the chemical attack did take place – and that Assad was responsible.

French President Emmanuel Macron said before Saturday’s missile strike against Syria that he had proof that Syrian President Bashar al-Assad had used chlorine to attack civilians in a militant-held enclave of Eastern Ghouta.

For her part, British Prime Minister Theresa May insisted that a “significant body of information including intelligence indicates the Syrian Regime is responsible for this latest attack.”