If you think that the Israeli/Neocon/Zionist equation can work in the political landscape, then you are in deep trouble. Back in 2006, the Israelis reluctantly admitted that they actually used white phosphorous to liquidate Lebanese civilians. As the Israeli newspaper Haaretz put it then, “White phosphorus causes very painful and often lethal chemical burns to those hit by it…”[1]

We are told that

“During the war several foreign media outlets reported that Lebanese civilians carried injuries characteristic of attacks with phosphorus, a substance that burns when it comes to contact with air. In one CNN report, a casualty with serious burns was seen lying in a South Lebanon hospital.

“In another case, Dr. Hussein Hamud al-Shel, who works at Dar al-Amal hospital in Ba’albek, said that he had received three corpses ‘entirely shriveled with black-green skin,’ a phenomenon characteristic of phosphorus injuries.”[2]

According to Human Rights Watch, Israel has relentlessly and incessantly used white phosphorous against the Palestinians.[3] Of course, Israel said that using white phosphorous was consistent with international law, but that’s a categorical lie. 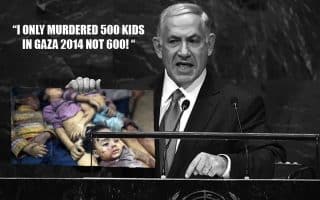 First of all, why did they deny that they were using white phosphorous when they got caught by international organizations? An IDF spokesperson said once: “I can tell you with certainty that white phosphorus is absolutely not being used.”[4] The Israeli military put out a statement then saying that “The IDF acts only in accordance with what is permitted by international law and does not use white phosphorus.”[5]

France, which now is condemning Assad for allegedly using chemical weapons, is also a culprit in this diabolical enterprise. As the International Business Times has reported just today:

“According to the petition, AXA [a French company] is violating international laws by its investment in Elbit Systems, an Israeli arms company which the petitioners say supplied Israeli forces with weapons, including chemical weapons prohibited by international conventions.

“Specifically, it mentions white phosphorus, which was used on Palestinian civilians in Gaza during the 2014 unrest. The use of white phosphorus by the Israeli military is well-documented by various organizations.”[8]

The United States would also be in deep trouble if we universalize the chemical red line thing, which is a Zionist operation. Listen to this:

What we are seeing again and again is that the Zionist regime is imploding. By violating the moral law and order, the regime is actually committing political suicide. Bad for them, but good for people who are of the truth.

Vital: 60 years on, lives are still being ruined by the...