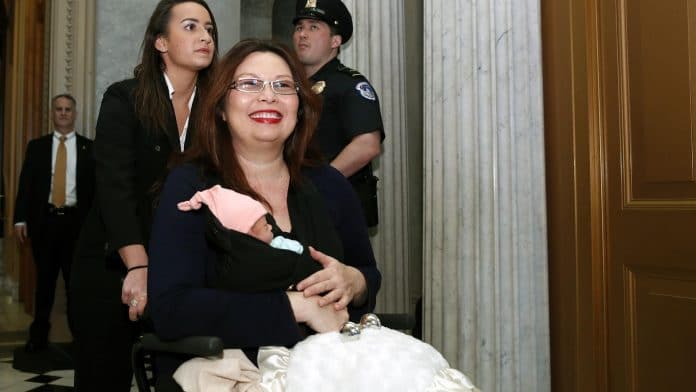 WASHINGTON — One day after the Senate voted to allow babies onto the chamber’s floor, Sen. Tammy Duckworth, D-Ill., made history by bringing her 10-day old newborn with her to vote.

Duckworth thought she might be the deciding vote in stopping a disputed Trump administration nominee. That turned out not to be the case, but the baby, Maile Pearl Bowlsbey, still caused a stir on the floor as the first one to appear with a mother who was a senator. On April 9, Duckworth became the first senator to give birth while in office. 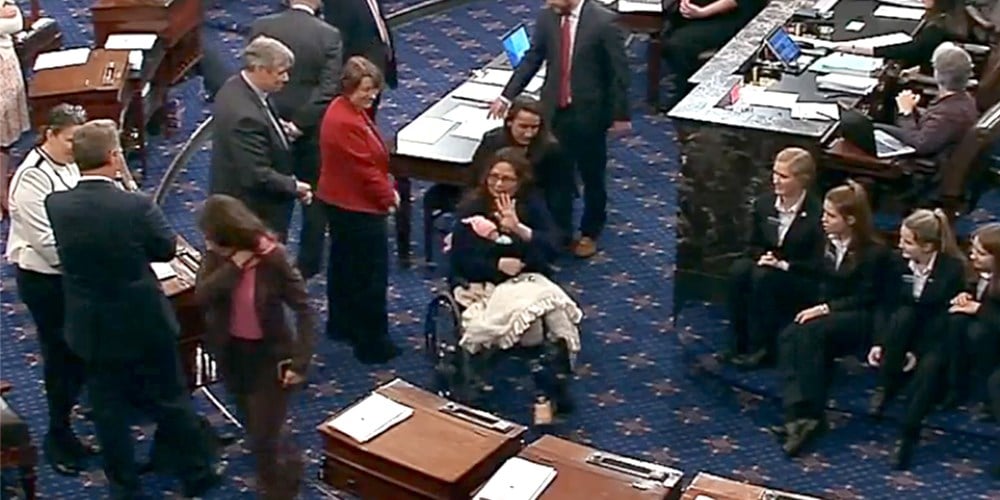 Duckworth said thank you to McConnell, the gatekeeper of what legislation gets brought to the Senate, for allowing the Senate to change the rules.

“It meant so much to be able to cast the vote as a mom and be able to do my job and take care of my baby at the same time,” she told reporters after the vote.

When it appeared hers could be the deciding vote on the nomination of Rep. Jim Bridenstine, R-Okla., to become NASA administrator, Duckworth took a brief break from her maternity leave and headed to the Capitol to cast her vote in opposition. Democrats opposed the nomination because of the nominee’s views on climate change and LGBTQ people, and because he has little background in science.

But Sen. Jeff Flake, R-Ariz., who had threatened to oppose President Donald Trump’s nominee, got concessions on an unrelated matter from GOP leaders and cast his vote in support of Bridenstine, allowing his confirmation to pass.

Adding to the drama Thursday, Vice President Mike Pence was present in case he was needed to break a tie. When it became evident he wasn’t, Pence left, but some senators remained to witness history, congratulate Duckworth on her new family member and, of course, to see the new baby.

The Senate chamber became one of the most exclusive clubs in the 1800s, when senators complained about too many people who were allowed to come onto the floor. Senators then created a list that has been added to over the last century but still allows just a few people into the chamber. Those include the president and vice president, members of Congress, the mayor of Washington and senators’ staff members. And, now, newborn babies are part of that list.

About Senator Duckworth’s Military Service:  Following in the footsteps of her father, who served in World War II, and ancestors who served in the Revolutionary War, Duckworth joined the Army Reserve Officers’ Training Corps as a graduate student at George Washington University in 1990. She became a commissioned officer in the United States Army Reserve in 1992 and chose to fly helicopters because it was one of the few combat jobs open to women. As a member of the Army Reserve, she went to flight school, later transferring to the Army National Guard and entering the Illinois Army National Guard in 1996.

Duckworth also worked as a staff supervisor at Rotary Internationalheadquarters in Evanston, Illinois.

Duckworth was working towards a Ph.D. in political science at Northern Illinois University, with research interests in the political economy and public health in southeast Asia, when she was deployed to Iraq in 2004.

She lost her right leg near the hip and her left leg below the knee from injuries sustained on November 12, 2004, when the UH-60 Black Hawk helicopter she was co-piloting was hit by a rocket-propelled grenade fired by Iraqi insurgents.

She was the first American female double amputee from the Iraq war.

The explosion “almost completely destroyed her right arm, breaking it in three places and tearing tissue from the back side of it”.

The doctors “reset the bones in her arm and stitched the cuts” to save her arm.

Duckworth received a Purple Hearton December 3 and was promoted to Major on December 21 at the Walter Reed Army Medical Center, where she was presented with an Air Medal and Army Commendation Medal.

She retired from the Illinois Army National Guard in October 2014 as a lieutenant colonel.

The Daughters of the American Revolution erected a statue with Duckworth’s likeness, and that of the Revolution’s Molly Pitcher in Mount Vernon, Illinois, in 2011. The statue was erected in honor of female veterans.