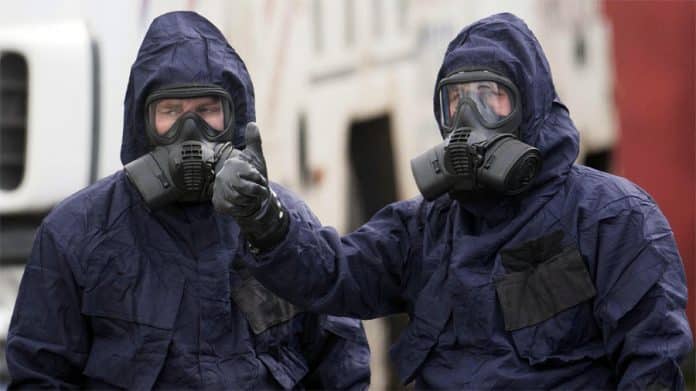 Nerve agent used against Skripals is ‘out in the wild,’ ex-MI5 officer tells RT

[ Editor’s Note: Gordon published this in our first article on the Skripal scam, that a “bench batch” of this Novichok agent could be produced by any major organic chemistry laboratory.

As usual, mass media totally ignore our reporting, as did our own Congress and security people. We did not get a single call wanting more information – the “we don’t want to know” thing kicking in.

As we have stated, Fake corporate media is a co-conspirator in the Skripal false flag attack, as it stood down. They knew, like we did, that the whole thing was a cheap scam. British media is just a doormat to its Intel services.

This was further supported by Britain making every guilty-perpetrator move that it could, such as blocking Moscow out of the investigation, refusing to provide a sample, or giving access to the Russian citizens allegedly attacked, but who now are suspected to have been recruited for this poorly staged psyop.

It is now way past having to expose the scam, or trying to get Britain to admit it. What is needed is for a major sanctions discussion to begin against Britain, and frankly anyone else engaged in false flag chemical weapons attacks. This “card” has never been played in this regard before. Now is the time, as it is something the public can do.

Governments are going to have to be shamed into taking action. As long as no serious efforts are being made, the better chance “they” feel they have that the storm will eventually blow over, similar to what happened with the fake WDM scam in the prelude to the second Iraqi invasion.

If the public does not come forward and claim these fake attacks to be overt security risks to us all and demand punishment for the true guilty parties, then they will be literally saying they are OK with the scams. On the British end, the Labor Party was way too soft on May, not wanting to seem “unpatriotic”.

Protecting one’s country from being dragged into a manipulated war is the greatest act of patriotism there is. I am still astounded at the lack of public concern… Jim W. Dean ]

The formula for the toxic nerve agent used against the Sergei and Yulia Skripal could have been used by anyone in the world as it is “out there in the wild,” a former British intelligence official told RT.

The UK government’s square accusations against Russia of it being responsible for the attack on the Skripals has been plunged into further doubt as Annie Machon, an ex-MI5 officer, told RT that the nerve agent’s formula was published in a book by a Russian defector to the US in 2008. The nerve agent therefore could have been reproduced by any lab in the world, she explained.

“It could’ve been developed… by up to 20 different laboratories in many different countries around the planet, so of course Britain should not have immediately jumped to the assumption that, because it was developed under the Soviet Union, it must therefore be used by Russia now,” she said.

It comes as the Britain’s representative to the Organization for the Prohibition of Chemical Weapons (OPCW), Peter Wilson, admitted that the international watchdog could not confirm “essential evidence” on the agent regarding its origin.

Russia hit back by saying it had replied to all of London’s questions concerning the Skripal case, and that it had also provided proof that the type of agent used against the former Russian double agent and his daughter in Salisbury on March 4 had been produced and patented in the US as a chemical weapon back in 2015.

Despite their inability to prove that the nerve agent was of Russian origin, or indeed that the Skripal poisoning was a state-sponsored attack, Machon said Britain is unlikely to move from its current position of declaring Russia“culpable.”

“They’ve sort of backed themselves into a corner now. I can’t see how they can rescind what they have already said,” Machon told RT. “[The UK] cannot afford diplomatically to row back from this position, particularly at a very vulnerable diplomatic time for Britain, with Brexit looming, so I’m not quite sure what they can do apart from keep scapegoating Russia.”