The UK is slowly but surely putting the pieces together: Russophobia is not working among the masses because people are actually waking up. The British government has recently accused a man who uses Twitter to demolish the Zionist narrative as “anti-Britain” and has also said that the man is a “Russian Bot.” The evidence?

There is none! Sky News made a big mistake of inviting the man, who goes by the name Ian, to defend his position. Ian literally humiliated the news outlet. This is worth watching:

According to the Powers that Be, if you stand against the war machine and marionettes like Theresa May, if you reject the imperialist ideology which continues to send both the United States and the UK into a sinkhole, if you don’t buy the claim that Assad used chemical weapons to gas his enemies, then you are taking an anti-British position.

The Powers That Be are obviously scared because the masses are waking up: they are seeing that the recent attack in Syria and the poisoning of Sergei Skripal were both false flag attacks which the British government has perpetuated in order to demonize both Russia and the Assad government. As Sputnik has put it:

“The British government claimed on Thursday to have concluded that there was a 4,000 percent increase in activity from Russian trolls following the Skripal poisoning and the West’s attack on Syria on April 14, naming @Ian56789, hereinafter ‘Ian,’ as one of the Kremlin’s accounts.”[1]

Anyone who now speaks against the Powers That Be must be a “Russian Bot.” VT has even been accused by Zionist outlets such as Bloomberg saying that we have been promoting the Russian narrative. Their stupid method is always the same: the accuse you of committing some kind of crime and then ask you to provide evidence that you are not guilty!

One needn’t be a lawyer to realize that this Zionist position is generally dumb. But the current regime continues to perpetuate it because that’s all they have. They cannot provide evidence or serious logical deduction. They only have lies, fabrications, hoaxes, and complete frauds.

The regime is obviously desperate because there is a movement out there called alternative media, and it really threatens virtually everything that the diabolical regime stands for. As Ian put it to Sky News, anyone who uses ‘critical thinking” is a threat to the British government. In fact, people are now saying that that Russophobia is actually “bullshit.”[2] 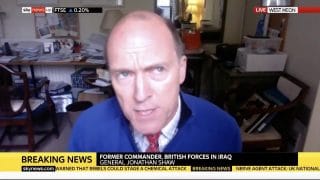 Sky News in particularly is in deep trouble because it has recently screwed up. The news outlet invited Major-General Jonathan Shaw, formerly one of the British Army’s most senior officers, to talk about the so-called gas attack in Syria.

As soon as Shaw started saying that there is no serious reason for Assad to use chemical weapons, the interviewer quickly cut Shaw off and abruptly ended the episode! Shaw had the opportunity to say this:

“What possible motive could have triggered Syria to launch this chemical attack at this time in this place?” The Syrians are winning, don’t take my word for it, take the American military’s word for it. And then suddenly you get this…”[3]

The interviewer jumped in and said: “I am very sorry, you have been very patient for us, but we do need to leave it there.”[4]

So much for fairness. But by stopping Shaw from saying the truth, Sky News essentially told its viewers that the news outlet is siding with lies and propaganda.