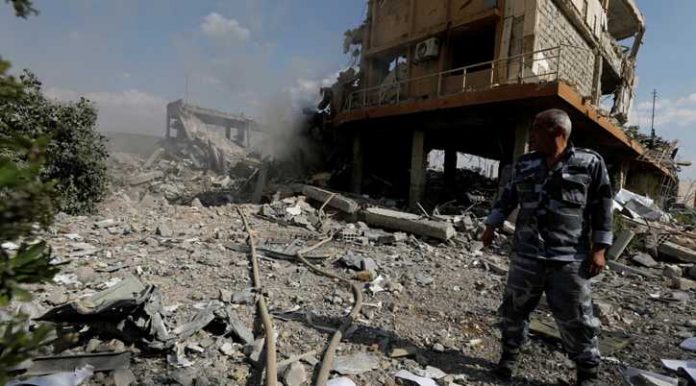 [ Editor’s Note: They say a picture is worth a 1000 words, and we have a lot of them now on the post-bombing results of the Scientific Research facility in the Damascus suburbs, with a few military firemen putting out a few smoke fires, and then the media people where none of them are wearing even a gauze mask, much less any chemical weapons protection.

And we see all the completely undamaged office buildings around it, which speaks to the US missile accuracy.

But what screams out is that there was obviously no chemical weapons activity going on there, not even samples being stored, as it would be crazy to have people just walking around. It was days after the attack that it was finally reported that the OPCW had inspected this place in November of 2017.

And don’t forget the first Pentagon briefing on the night of the attack that stated quite clearly that the targets were chosen based on presenting minimal danger to any nearby civilians. Of course our conveniently blind corporate media pretended not to catch this anomaly with all the office buildings clearly surrounding the site.

Add to that the report yesterday that the SAA found two cruise missiles that had malfunctioned and dropped out of the sky; these are in Russia for analysis now. If they are those new “smart” missiles that Trump was bragging about, then Moscow will have the latest electronics inside them.

This would be a huge intelligence blow, that there was no fail-safe process to destroy missiles that malfunctioned in flight so their most secret components could not be recovered by those targeted.

Don’t expect to read anything about this in Western media, despite its importance to we serfs to be able to evaluate the competency of those running the show, so we could make changes where necessary. Actually just the opposite system is in place – one to protect them at all costs, at our expense … Jim W. Dean ]

The US must have been well aware that there were no chemical stockpiles at Syrian facilities the coalition destroyed in their ‘retaliatory’ strike, Russian chemical weapons experts told RT, noting the absence of toxic emissions.

Now, after the dust settled, serious questions arise about the actual presence of any hazardous substances at these sites, including the bombed-out scientific facility in the Barzeh district in northern Damascus.

“This scientific research center has been inspected for several times by experts from the Organization for the Prohibition of Chemical Weapons [OPCW], moreover, a decision was taken to carry out such inspections twice a year,” Anton Utkin, a Russian chemical weapons expert and former UN inspector in Iraq, told RT.

The chemical weapons watchdog’s representatives found no traces of poisonous substances inside the center, even though it was inspected “upside down, in and out.”

The only reason why the Barzeh compound was put on the radar is that “residues of amines were found there,” Utkin said, explaining further that amines are not chemical weapons or nerve agents themselves, but just substances that may potentially be used as “stabilizers”in chemical weapons production.

However, since the facility in question was subject to a detailed inspection, “the Americans knew there were no chemical weapons,” Utkin emphasized. Therefore, the expert suggested, by targeting the Barzeh facility, the US-led coalition were apparently trying “to destroy Syria’s scientific capabilities as the center was pursuing various civilian-use [research] objectives.”

“Nevertheless, the strike was carried out, and the Americans knew they were risking nothing as there could be no emission of chemical weapons from this center,” he said.

If anything, the US-led strike become a major blow to the Chemical Weapons Convention – a 1997 agreement to which the US is a party – the expert argued. “All this is written down in the convention, namely how to act, how to carry out an investigation, etc,” Utkin continued, adding that Americans seem to prefer to rely on media speculations rather than established facts.

Previously, Washington claimed it had compelling evidence of the alleged chemical attack in Douma, obtained through browsing social media and other open sources – as well as classified intelligence which cannot be released. The ‘retaliatory’ missile strike came several hours before OPCW inspectors were scheduled to visit the site of the chemical incident to begin their probe.

“Well, this is at least ridiculous,” Utkin said, comparing the situation to a TV show “in which some psychics say they can tell you what happened to victims of criminal offences judging by their photographs.”

The expert said the OPCW fact-finding mission has fairly good chances to verify if chemical weapons were actually used in Douma – or stored at the sites struck by the coalition. Collecting blood and urine samples from those allegedly injured, as well as studying their symptoms, will be crucial, as traces of chlorine or any other chemical warfare agent remain in the human body for several weeks.

“It is obvious that if the strikes targeted stockpiles of chlorine or some nerve agents, there would have been a release [of such gases],” he said. It means that “either the missiles missed their targets, or such stockpiles do not exist at all.”

Earlier, an engineer at the Barzeh facility told RT Arabic that the labs were making medicine and testing toys for safety.

“You can see for yourself that nothing has happened. I’ve been here since 5:00 a.m. No signs of weapons-grade chemicals,” he said. The researcher said he had worked at the facility for decades, and it used to develop medicine and household chemicals. The engineer confirmed that OPCW inspectors “several times visited the site with a thorough inspection.”