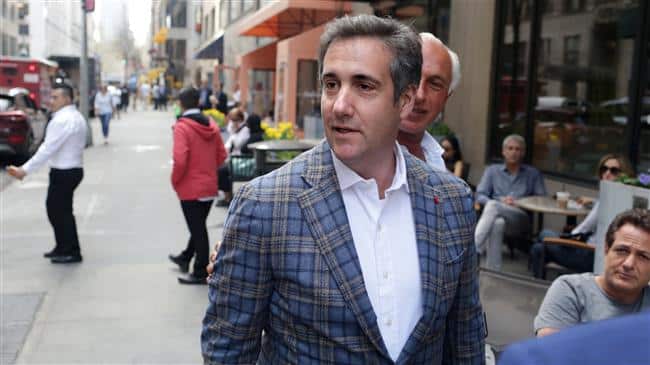 [ Editor’s Note: The dust cleared a bit on the raid on Trump’s lawyer. It is he who is under criminal investigation. The question now is, is he being targeted to get to Trump?

The hearing today was a cat fight to limit the prosecution being able to use what they have, with Cohen’s lawyers claiming a lot was privileged and prosecutors should not be able to see it.

But it was quickly determined that Trump does not do emails, where that is not a worry. Then Cohen’s attorneys claimed that other client information could be compromised, even though they admitted they knew nothing about his other clients. The Judge suspects that Cohen has a very limited practice.

The judge pulled a flank move on them and requested they bring in a list of them to Monday’s hearing, so it looks like they will be running up a nice legal bill over the weekend.

A major DC lawyer who had hired him as client-getter for $500,000 a year submitted they had only been referred five clients for the year ending in March, and did not renew the deal – surprise, surprise.

Cohen is looking at ruin, with a conviction and losing his law license, which would be quite a fall from grace, after a seemingly untouchable position as the president’s lawyer. You can bet your booties others who have done business with Trump might be shaking in their boots, or slippers, as the case may be.

And mixed in with all this was ex-FBI Comey’s media firestorm cranked up, with Trump pouring fuel on the fire with his usual nutting-out tweet. I have to feel sorry for any attorney working for him.

In what will go down as a lame attempt to divert media attention, Trump’s announcing the pardon for Scooter Libby shows the knee jerking going on inside the White House.

And last, we saw the videotape of the doctor inside the Douma hospital describe that they treated people for smoke inhalation after a bomb hit a building, but no one for a chemical attack. The gassing story continues to sink everyday, as does the British nerve-agent hoax.

Lavrov finally came out with charging the Brits with putting the White Helmets up to staging the fake gas attack – better late than never – but they should have gotten this out days ago to put the hoaxers on the defensive … Jim W. Dean ]

The disclosure came in Manhattan federal court on Friday in response to Cohen’s motion to block prosecutors from reviewing documents seized in raids of his home and office on Monday.

Documents collected are about a host of issues, including a 2016 payment Cohen made to a porn-star to keep her quiet about an alleged sexual encounter with Trump.

Lawyers for Cohen and Trump, neither of whom was present in court, assert that at least some of the documents are subject to attorney-client privilege, therefore, they should not be viewed by prosecutors until they, or an independent third party appointed by the court, review the material.

On Monday, Stephen Ryan, Cohen’s attorney, called the searches “completely inappropriate and unnecessary,” saying, they “resulted in the unnecessary seizure of protected attorney client communications between a lawyer and his client.”

However, prosecutors said in the court filing that “the searches were authorized by a federal magistrate judge, who had found probable cause to believe that the premises and devices searched contained evidence, fruits, and instrumentalities of conduct for which Cohen is under criminal investigation.”

They also said that their investigation “largely centers on [Cohen’s] personal business dealings” rather than his work as an attorney.

Friday hearing was put on hold until Monday after Joanna Hendon, an attorney for Trump, intervened and requested extra time.

“He as an acute interest in these proceedings,” said Hendon, who said was hired Wednesday night.

Cohen has been at the center of a controversy surrounding a $130,000 payment to Stormy Daniels, who has alleged that she had sex with Trump in 2006 and was paid money shortly before the 2016 election to say nothing about the affair.

Cohen has also circulated a statement signed by Daniels, whose real name is Stephanie Clifford, in which the actress denied receiving “hush money” from Trump.