If the audio is authenticated, the phone call will put another dent in London’s claim that the A234 chemical agent known in Western countries as Novichok, was Russian-made.

Vladimir ‘Vovan’ Kuznetsov and Alexei ‘Lexus’ Stolyarov, the pair of Russian telephone pranksters well-known for their constant trolling of Western officials, have put out an audio recording of what they say is their conversation with Ahmet Uzumcu, the director general of the Organization for the Prohibition of Chemical Weapons (OPCW).

Posing as Polish Prime Minister Mateusz Morawiecki, the pranksters got the man in the tape to admit that the nerve agent used to poison Russian ex-spy Sergei Skripal and his daughter Yulia could have been made anywhere, and to point out that the British government never gave the OPCW the mandate to trace the source of the chemical.

Here is a partial transcript of their conversation:

Alleged Ahmet Uzumcu: As far as the OPCW involvement is concerned Mr. Prime Minister, we were asked by the United Kingdom to provide technical assistance, to take samples and to analyze them in our designated laboratories, which are very reliable. The work was done and it is now concluded. The results in fact confirm as far as the identity of the chemical which was used. We were able to confirm the results achieved by the British authorities.

We don’t call it with the same name, but the nature of the chemical is in fact identical, as far as the chemistry is concerned. So the formula is the same and so on. They call it Novichok; we cannot call it Novichok because Novichok is a terminology used by Western countries. It’s not universally used…It’s like calling water and H20.

But our laboratories and experts of course were not mandated to trace the source, the origin of this chemical to any country. The British have of course taken their own position, because they may have additional information which we do not have. In any case, our mandate was limited to identifying the chemical, which is done now… 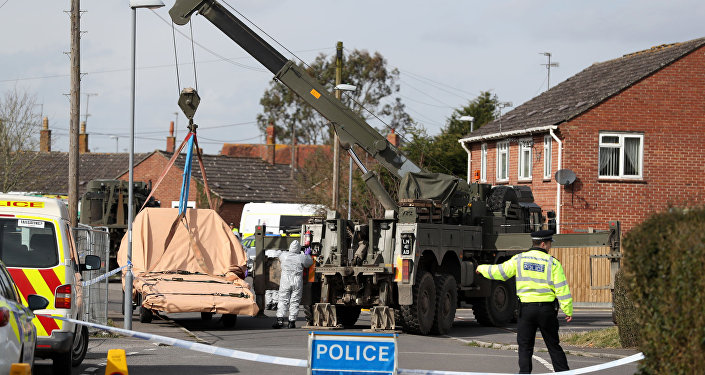 Pranksters posing as Morawiecki: I understand and I know. You know I don’t specialize in chemistry, and I have only basic knowledge, so please excuse me if I ask you to explain to me some basic simple things. First of all, Salisbury: based on the report we defined the chemical composition and now understand that those who prepared the substance had a high level lab, correct?

Alleged Ahmet Uzumcu: Our laboratories found that the toxic chemical which was used was of a high purity. That means according to our experts that it could not be done by say a terrorist or organized crime or individuals, but rather should have been done by real experts who had experience in this field. This could only be done in full-fledged facilities or laboratories. It could not be done [just] anywhere.

Pranksters posing as Morawiecki: But you are not sure that it could be produced by a state?

Alleged Ahmet Uzumcu: We cannot be sure. Our experts cannot verify this, but they think that it was done by real experts.

Pranksters posing as Morawiecki: Ok. So it’s not possible that it was produced by a private actor?

Alleged Ahmet Uzumcu: Oh no. I think we can exclude this, yes. I don’t think it can be done.

Pranksters posing as Morawiecki: Ok, so if it is a state, I hope you understand that it could be only Russia. If not, do you have any ideas which other states could have developed this substance? In theory such labs are in Russia, but [also] in Great Britain, the USA, Ukraine and even in Poland as well.

Alleged Ahmet Uzumcu: Mr. Prime Minister, according to our experts, it can be produced in any state. This cannot be excluded. However, also, the Russians claim that there were some research activities on such substances elsewhere, which may be true. But the states which may have conducted such activities would have done it for protective, defensive purposes [aimed at determining] how to detect it, how to defend or develop some antidotes against the use of such substances and so on. But these activities are allowed by the [Chemical Weapons] Convention. They can be conducted, and they don’t need to be declared.

However, if such research activities are conducted for the production of such substances, and for their use in fact to harm people in warfare and so on, of course they need to be declared, and so far we didn’t receive such as declaration from any member country of the OPCW.

Pranksters posing as Morawiecki: So it could be produced in any country?

Pranksters posing as Morawiecki: In theory yes…So even in the US?

Alleged Ahmet Uzumcu: Oh absolutely! In any country where there would be some chemistry expertise. Because the material which is used, as I’m told by our experts, is accessible. So that’s the problem we face with this toxic chemical. The material to produce it is available without any restrictions. However, a high degree of expertise is required, and also a good laboratory is required.

Listen to the full audio of Vovan and Lexus’ conversation with the man believed to be Ahmet Uzumcu here:

In the second part of the audio, the man identified as Uzumcu tells the pranksters that Russia seems supportive of OPCW investigators’ deployment to Syria to investigate the alleged Douma chemical attack. He adds that he “cannot verify” speculation by some Western powers that Russia and Syria were “cleaning up the place” before the investigators’ arrival.