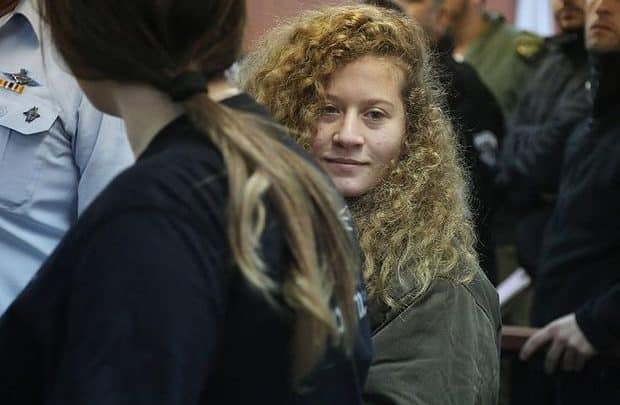 [ Editor’s Note: When reading this story, it triggered the memory of a dated phrase, “You gotta love ‘dem Jews”, a satirical remark on how the hard core supremacist Jews never miss a chance to present themselves as eternal victims. Do they have victimizing in their genes?

If any non-Jewish politician in the world had suggested this ‘knee-capping” solution for protesting Zionist jihadis, world Jewry would have been up in arms. But I doubt we will see the reverse of this for Miss Ahed Tamimi being targeted with such threat.

By the way, Mr. Smotrich is a member of the “shoot-to-kill policy for stone-throwing protesters” wing of the Knesset.

Please note that these kinds of statements are not at all unusual in the Israeli Knesset. We just never hear about them, as they are only published in Hebrew to avoid the English key word searching. Israel Shamir pointed this out to me 15 years ago.

The deep racial hatred toward Palestinians, who are Semites mind you, from Ashkenazi non-Semite Jews, has a Mel-Brooks comedy farce taint to it. The Likud supremacists get a free pass on it from corporate media, which bends over backwards to make sure that “knee capping” statements like this are never published in English media.

If I win the lotto, I promise to set up a foundation to fund publishing all of the outrageous statements coming from the Knesset KKK branch in Israel, which would be a never ending series. The hard core Likudists actually compete for votes based on who hates Arabs the most.

But do let me thank you Mr. Bezalel Smotrich for helping me get my Monday morning off with a big bang. And no, I am not thinking of proposing that Jewish supremacists in the Knesset all be kneecapped, all though please forgive me if I dream about it from time to time, just for biblical, “an eye for an eye” reasons … Jim W. Dean ]

Female Palestinian protester Ahed Tamimi, who is currently serving an eight-month jail term for slapping an Israeli soldier, should have been shot in the knee and placed under house arrest for life, believes an Israeli MP.

Tamimi, 17, has a long record of protesting as a youngster against Israeli policies in the occupied Palestinian territories, and was sentenced last month to eight months behind bars for verbally and physically confronting armed Israeli soldiers in her home village.

Her imprisonment has been highlighted amid the violence at Israel’s border wall with the Gaza Strip, where dozens of Palestinians have been reported killed and hundreds injured by Israeli fire.

Palestinian children involved in protests against Israel should be dealt with in the harshest possible way, Bezalel Smotrich, a member of the Israeli Knesset from the right-wing Tkuma party, which is part of the country’s ruling coalition, appeared to signal.

In a tweet on Sunday, he lamented that Ahed Tamimi was not injured or sentenced to a longer term. The tweet was a comment to a video showing the girl and other people confronting Israeli soldiers a few years ago.

“I am actually sad that she is in jail. She should have gotten a bullet, at least in her kneecap. I would have put her under house arrest for life,” he wrote in Hebrew.

Coming after the killing of Ayoub, the tweet drew public attention and criticism for inciting violence against minors, although Smotrich was adamant in his position. In a follow-up post on Facebook, he defended his words, branding Palestinian children involved in anti-Israeli protests “terrorists.”

He argued that when Palestinian children confront Israeli soldiers and are filmed on camera, this undermines the soldiers’ resolve to meet violence from Palestinians with force and thus hurts deterrence against such violence.

“Ahed Tamimi is not an innocent girl I want to be shot. She is a terrorist, whose actions hurt our security and put the citizens of Israel in danger,” he claimed. “I care about the lives of people of Israel, not the lives of my enemies. Those who criticize cruelty end up being cruel to the merciful.”

Smotrich, 38, has been serving as a legislator since 2015. A scion of a religious settler family and a married father of six, he currently lives in a settlement in the West Bank. Smotrich is a staunch supporter of a shoot-to-kill policy towards stone-throwing Palestinian teens, and on several occasions has proposed segregation of Jews and Arabs.

He infamously tweeted that it was natural for his wife not to share a maternity ward with “someone who just gave birth to a baby might want to murder her baby in another 20 years.”