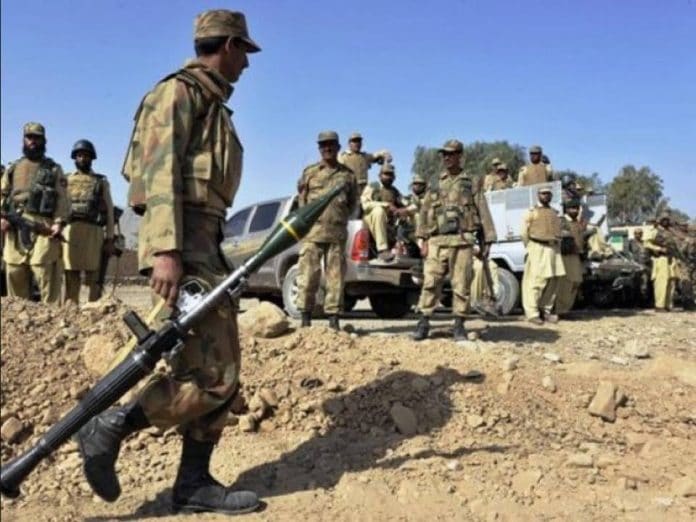 Historically speaking, from the massacres in Bangladesh in 1971 to the training and arming of Afghan jihadists during the Soviet-Afghan war throughout the 1980s and 1990s, and then launching ill-conceived military operations in Pakistan’s tribal areas under American pressure, leading to the displacement of millions of Pashtun tribesmen, the single biggest issue in Pakistan has been the interference of army in politics. Unless Pakistanis are able to establish civilian supremacy in Pakistan, it would become a rogue state which will pose a threat to regional peace and its own citizenry.

For the half of its 70-year-long history, Pakistan was directly ruled by the army, and for the remaining half, the security establishment kept dictating Pakistan’s defense and security policy from behind the scenes. The outcome of Ayub Khan’s first decade-long martial law from 1958 to 1969 was that Bengalis were marginalized and alienated to an extent that it led to the separation of East Pakistan (Bangladesh) in 1971.

During General Zia’s second decade-long martial law from 1977 to 1988, Pakistan’s military trained and armed its own worst nemesis, the Afghan and Kashmiri jihadists. And during General Musharraf’s third martial law from 1999 to 2008, Pakistan’s security establishment made a volte-face under American pressure and declared a war against the Pashtun militants that ignited the fire of insurgency in the tribal areas of Pakistan.

Although most political commentators in Pakistan nowadays hold an Islamist General Zia-ul-Haq responsible for the jihadist militancy in the tribal areas, it would be erroneous to assume that nurturing militancy in Pakistan was the doing of an individual scapegoat named Zia. All the army chiefs after Zia’s assassination in 1988, including Generals Aslam Beg, Asif Nawaz, Waheed Kakar, Jahangir Karamat and right up to General Musharraf, upheld the same military doctrine of using jihadist proxies to destabilize the hostile neighboring countries, Afghanistan, India and Iran, throughout the 1980s and 1990s.

A strategic rethink in the Pakistan Army’s top-brass took place only after the 9/11 terror attack, when Richard Armitage, the US Deputy Secretary of State during the Bush administration, threatened General Musharraf in so many words: “We will send you back to the Stone Age unless you stop supporting the Taliban.” Thus, deliberate promotion of Islamic radicalism and militancy in the region was not the doing of an individual general; rather, it was a well-thought-out military doctrine of a rogue institution.

The military mindset, training and institutional logic dictates a militarist and aggressive approach to foreign affairs and security-related matters. Therefore, as a matter of principle, military must be kept miles away from the top decision-making organs of the state.

If the armed forces of a country are entitled to abrogate “a piece of paper” – the phrase used by General Zia to describe Pakistan’s Constitution – under the barrel of a gun, then by the same logic, thieves and robbers are also entitled to question the legitimacy of civil and criminal codes, which derive their authority from the constitution. To bring home the point with another apt analogy, consent is the only element that differentiates rape from consensual sex. Thus, ruling a country without the consent and participation of the masses is nothing short of the rape of a nation.

Notwithstanding, is it not ironic that two very similar insurgencies have simultaneously been going on in Pakistan for the last several years: the Baloch insurgency in the Balochistan province and the insurgency of the Pashtun tribesmen in the tribal areas of Khyber Pakhtunkhwa province bordering the American-occupied Afghanistan.

While the Pakistani neoliberal elites fully sympathize with the oppressed Baloch nationalists, when it comes to the Pashtun tribesmen, they are willing to give Pakistan’s security agencies a license to kill, why? It’s simply because the tribal Pashtun insurgents use the veneer of religion to justify their tribal instinct of retribution.

The name Islam, however, is such an anathema to the core neoliberal sensibilities that the elites don’t even bother to delve deeper into the causes of insurgency and summarily decide that since the Pashtun tribesmen are using the odious label of the Taliban, therefore they are not worthy of their sympathies. And as a result, the security establishment gets a carte blanche to indiscriminately bomb the towns and villages of Pashtun tribesmen.

As well-informed readers must be aware that military operations have been going on in the tribal areas of Pakistan since 2009, but a military operation – unlike law enforcement or Rangers operation, as in Karachi – is a different kind of operation; it’s an all-out war.

The army surrounds the insurgency-wracked area from all sides and orders the villagers to vacate their homes. Then the army calls in air force and heavy artillery to carpet bomb the whole area; after which ground troops move in to look for the dead and injured in the rubble of towns and villages.

Air force bombardment and heavy artillery shelling has been going on in the tribal areas of Pakistan for several years; Pashtun tribesmen have been taking fire; their homes, property and livelihoods have been destroyed; they have lost their families and children in this brutal war, which has displaced millions of tribesmen who had to live for many years in the refugee camps in Peshawar, Mardan and Bannu districts after the Swat and South Waziristan military operations in 2009 and then the North Waziristan operation in 2014.

The Pashtuns are the most unfortunate nation on the planet nowadays, because nobody understands and represents them; not even their own leadership, whether religious or ethnic. In Afghanistan, the Pashtuns are represented by Washington’s stooges, like Hamid Karzai and Ashraf Ghani, and in Pakistan, the Pashtun nationalist Awami National Party (ANP) loves to play the victim card and finds solace in learned helplessness.

In Pakistan, however, the Pashtuns are no longer represented by a single political entity, a fact which has become obvious after the 2013 parliamentary elections in which the Pashtun nationalist ANP was wiped out of its former strongholds.

Now, there are at least three distinct categories of Pashtuns: firstly, the Pashtun nationalists who follow Abdul Ghaffar Khan’s legacy and have their strongholds in Charsadda and Mardan districts; secondly, the religiously inclined Islamist Pashtuns who vote for Islamist political parties, such as Jamaat-e-Islami and Jamiat Ulema-e-Islam, in the southern districts of Khyber Pakhtunkhwa province; and thirdly, the emerging new phenomena, the Pakistan nationalist Pashtuns, most of whom have joined Imran Khan’s Pakistan Tehreek-e-Insaf (PTI) in recent years, though some have also joined Nawaz Sharif’s Pakistan Muslim League.

It is worth noting here that the general elections of 2013 were contested on a single issue: Pakistan’s partnership in the American-led war on terror, which has displaced millions of Pashtun tribesmen. The Pashtun nationalist Awami National Party (ANP) was routed, because in keeping with its so-called “liberal interventionist” ideology, it stood for military operations against Islamist Pashtun militants in tribal areas.

And the people of Khyber Pakhtunkhwa province gave a sweeping mandate to the newcomer in the Pakistani political landscape: Imran Khan and his Pakistan Tehreek-e-Insaf (PTI), because the latter promised to deal with tribal militants through negotiations and political settlements.

Although both Imran Khan and Nawaz Sharif failed to keep their election pledge of using peaceful means for dealing with the menace of religious extremism and militancy, the public sentiment has been firmly against military operations in tribal areas.

The 2013 parliamentary elections were, in a way, a referendum against Pakistan’s partnership in the American-led war on terror in the Af-Pak region, and the Pashtun electorate gave an overwhelming mandate to pro-peace political parties against the pro-war Pakistan People’s Party (PPP) and Awami National Party (ANP).

After the Pashtun nationalist Awami National Party (ANP) was completely routed at the hands of Imran Khan’s PTI during the last general elections, it has come up with a new electoral gimmick in the form of Pashtun Tahafuz (Protection) Movement for the parliamentary elections slated for July. Excluding Manzoor Pashteen and some of his close associates, the rest of Pashtun Protection Movement’s leadership is comprised of ANP’s political activists.

But is it not ironic that the very same political forces that cheerled military operations in Pakistan’s tribal areas, leading to the displacement of millions of Pashtun tribesmen, are now championing Pashtun rights? When Pakistan’s military was indiscriminately bombing the towns and villages of Pashtun tribesmen, Pakistan People’s Party (PPP) and Awami National Party (ANP) lent their unequivocal support to Pakistan’s so-called war on terror under American pressure, but now they are demanding that Pashtun tribesmen held by security agencies should be released, the area should be cleared of mines and security check posts in tribal areas should be removed in order to placate Khyber Pakhtunkhwa province’s Pashtun majority electorate.

As we know that politics is mostly about forming alliances, therefore the shrewd neoliberal elites lured the leadership of gullible ethno-linguistic nationalists and struck a political alliance with them. But this alliance is only a marriage of convenience, because culturally, both these camps don’t have anything in common with each other. The Islamic nationalists and the ethno-linguistic nationalists belong to the same social stratum and go through thick and thin together; while the comprador bourgeois are beholden to foreign powers.

Leadership is a two-way street, a judicious leader is supposed to guide the masses, but at the same time, he is also supposed to represent the interests and aspirations of the disenfranchised masses. The detached and insular leadership that lives in a fantasy world of outlandish theories and fails to understand the mindsets and inclinations of the masses tends to lose its mass appeal sooner or later.