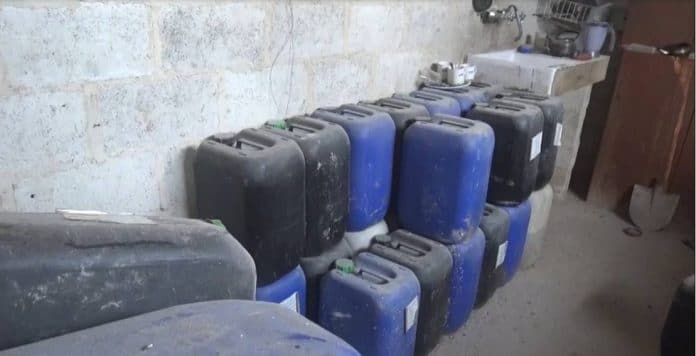 America is ready to hit Bashar Assad’s Syria, accused of an alleged chemical attack on the town of Douma in the Ghouta region. But what was a laboratory full of chemical products from Saudi Arabia doing in an area controlled up to 48 hours earlier by those same rebels from Jaysh al Islam who released images of the alleged attack attributed to the Damascus government last Friday?

The writer has entered the chemical laboratory of Shifounieh last March 14, following the Syrian army that had just ripped him from the rebels. “In this laboratory,” the soldier told me, “there are several materials sent from Western countries. This place contains raw materials for the manufacture of explosive and toxic materials. The mixing processes take place in the upper part of the building and then are transported to the outside “.

And indeed, the chemical materials in the building were many, including metaxylene, used primarily to create explosives. But not only: inside the laboratory there were also numerous ventilation systems, necessary to make the air breathable.

On more than one occasion, Syrian rebels, including the Army of Islam, have admitted that they used chemical weapons against their adversaries . Last April 4, moreover, Sama TV released images of another laboratory of the rebels of Ghouta in which chlorine was present, the same material used in the attack on 8 April.

In that laboratory, not even so much artisanal, there were chemical precursors, gas masks and tools for packaging potentially lethal gases. What were they doing there? What use they wanted to make the rebels. And why in the face of such evidence, only the Damascus government continues to be accused. But above all how can we risk a conflict capable of involving Russia when among the suspects there are the same rebels who denounce the chemical killings?

SOURCEGli Occhi Della Guerra
ATTENTION READERS
Due to the nature of independent content, VT cannot guarantee content validity.
We ask you to Read Our Content Policy so a clear comprehension of VT's independent non-censored media is understood and given its proper place in the world of news, opinion and media.