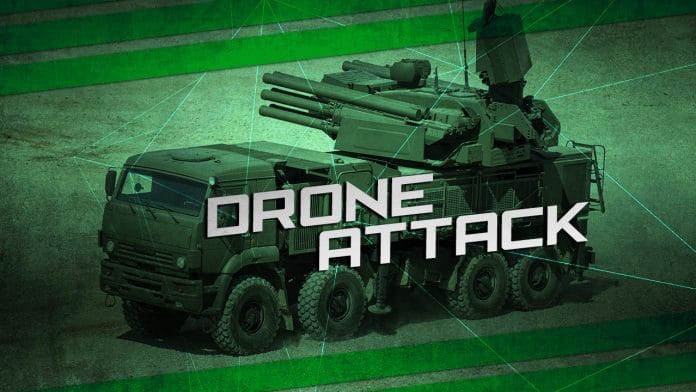 On the evening of April 24, Russian forces repelled an attack by armed drones on their Hmeimim airbase in the province of Latakia.

According to the reports, Russian Pantsir-S1 air defense systems shot down two drones armed with projectiles before they were able to attack the base. Some sources added that the airbase had also come under rocket attack. However, these rocket were also intercepted.

The repeated drone attacks on the Russian military facilities show that militant groups operating in Syria have no more resources with which to oppose the Syrian Arab Army (SAA), backed by Russia and Iran, and their key current goal is to gain media coverage in a desperate attempts to receive additional funds and support from their foreign sponsors.

Such a media effect could be achieved if militants were to succeed in delivering damage to the Russian airbase and the aircraft deployed there.

The SAA established control over the town of Jayrud in eastern Qalamoun after militants had withdrawn from it. A reconciliation agreement in the rest of the area is underway.

In southern Damascus, the SAA and its allies continued their operation against ISIS liberating the Joura Orchards. However, no breakthrough has yet been achieved. ISIS is fiercely resisting to the advancing government forces.

Israel is unhappy with reports that Russia may supply the Syrian military with S-300 systems in response to the April 14 missile strike on the country by US-led forces. Israeli Defense Minister Avigdor Lieberman claimed that Israeli forces will crush any weapons that pose a threat to his country.

“What’s important to us is that the defensive weapons the Russians are giving Syria won’t be used against us. If they’re used against us, we’ll act against them,” Lieberman said according to the Ynet newspaper. “If anyone attacks us, we will retaliate, regardless of S-300, S-700 or anything else’s presence there.”

Lieberman claimed that Israel “doesn’t interfere in Syria’s internal affairs” adding that however, Israel will not allow Iran “to flood” Syria “with advanced weapons systems that would be aimed against Israel.”

Earlier, US CENTCOM commander General Joseph Votel made “a secret and unprecedented visit to Israel” and met with senior Israeli security officials. Some experts link the trip to the alleged Israeli-US talks what to do if Syria receives advanced S-300 missile defense systems.

It does look Washington did not expect that the April 14 attack could somehow backfire, but it did.