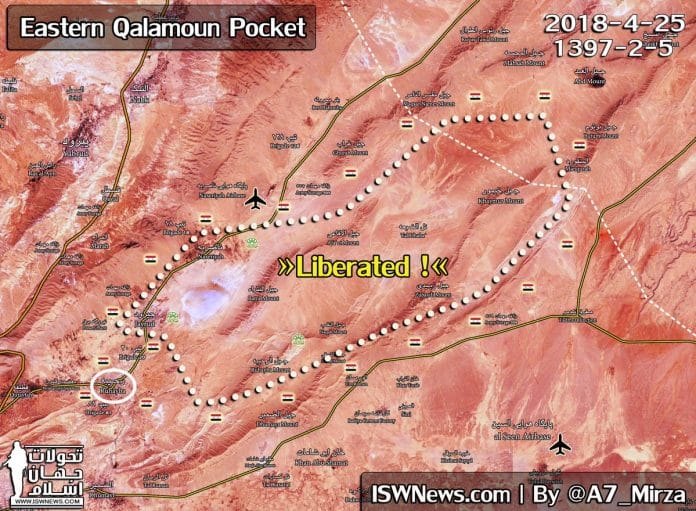 [ Editor’s Note: Syria continues to clear jihadi-controlled areas near Damascus, while the US continues its media offensive on Syria, Russia and Iran. Things have quieted down on the Syrian front militarily as the Pentagon licks its wounds from what is growing into a wasteful misuse of military power with its recent missile strike.

The Pentagon did leak that it had to launch a fanny-covering show attack to keep Trump happy and to buttress the Intel community’s long running hoax of the Syrian Army having nothing better to do with its time than to gas innocent civilians in the Damascus suburbs.

Today we also have the Sputnik article on VT that the gassing attack used as the missile attack premise has been exposed as a fraud. US media has helped with damage control in not reporting a word on it.

Mattis is quoted as having told Trump that attacking Russian forces was not a good idea; so these fluff, unimportant targets were chosen. That was only partially true, as the strikes were aimed to degrade the Syrian air defenses, something we feel Israel also voted for.

Israel does so love to have the US do its fighting for it, so the Likud Party can brag to its followers how it can lead America around by the nose. But the 100-missiles attack has backfired on Israel, with the real potential of the upgraded S300s going into Syria. Despite the tepid claims by Israel of its relations with Russia suffering, Moscow does not seem to be trembling.

Southfront’s article shows the two US missiles that were recovered, which according to the Pentagon struck their targets, yet were in good enough shape to be an Intel coup for the Russians.

We are waiting for someone to call for an investigation into losing new missile technology over an attack on a fake gassing claim. Don’t hold your breath … Jim W. Dean ]

On April 25, according to pro-government sources, the Syrian Army established a full control of the Eastern Qalamoun region in western Syria after a withdrawal of the last batch of militants in the area.

However, the Syrian Defense Ministry still has confirm the control of the region in an official statement.

It’s important to note that a large number of militants remained in the area in the framework of a reconciliation deal reached between Damascus and them. These militants have surrendered weapons and choosen to settle their legal status in the area. Some of them will joint the pro-government National Defense Forces.

The Syrian Army also received a large number of heavy weapons and missiles that had been in the hands of militant groups operating in Eastern Qalamoun. MORE HERE