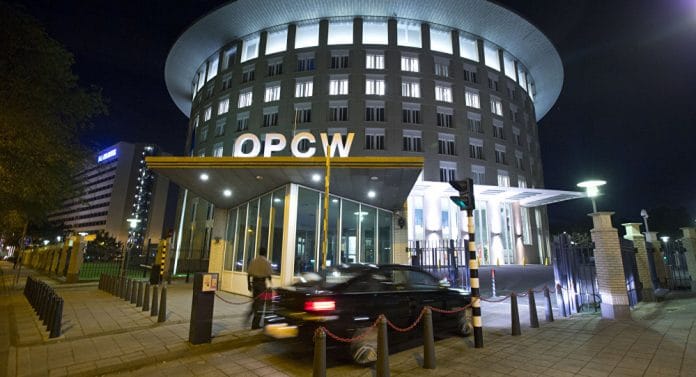 [ Editor’s Note: That the Duoma gassing was a hoax will be of no surprise to VT readers, but these very public OPCW witness interviews will put both the hoax originators and their media enablers into a bright spot light.

We have never before been able to expose their fraud on this level before, and we have to use it for everything that it is worth, like getting a special international committee to make a determination how many of these fake attacks, or false flag ones, have happened, and exposing who was behind them.

We will wait now to see whether the plan to bring these witnesses to the UN will be derailed. Major media can duck covering this CPCW event, but doing that to a UN one would make them look even worse.

The Pentagon is in risky territory as no one is going to believe they did not know the gassing was a hoax but went forward with the missile attack anyway, no one wanting to refuse by resigning and being treated like a leper in retirement, as in maybe getting a free meal as payment for a speaking event.

Have you noticed how the propaganda on Mad Dog Assad, “the gasser”, has like evaporated? Even that is a story. And no, none of the media people assigned to do hit pieces on VT as foreign propagandists have called to interview us on what it is like to be right when all corporate media is wrong. All of you who have supported us should take a bow. You were on the front lines on this thing, too … Jim W. Dean ]

“We were at the basement and we heard people shouting that we needed to go to a hospital. We went through a tunnel. At the hospital they started pouring cold water on me,” the boy told the press conference, gathered by Russia’s mission at the Organization for the Prohibition of Chemical Weapons (OPCW) in The Hague.

Hassan was among the “victims” seen being washed by water hoses in a video released by the controversial White Helmets group on April 7.

The boy and his family later spoke to the media and revealed that Hassan was hurried to the scene by men who claimed that a chemical attack had taken place. They started pouring cold water on the boy and others, filming the frightened children.

The alleged chemical incident was only supported by the White Helmets’ video and social media reports from militant-linked groups, but the US, the UK and France judged they had enough evidence that it actually took place and launched a series of punitive strikes against Syria on April 14.

The US and its allies accused Syrian President Bashar Assad of carrying out the “attack,”without providing any proof of their claim. Notably, the strike came hours before the OPCW fact-finding team was set to arrive in Douma to determine whether chemical weapons had been used there.