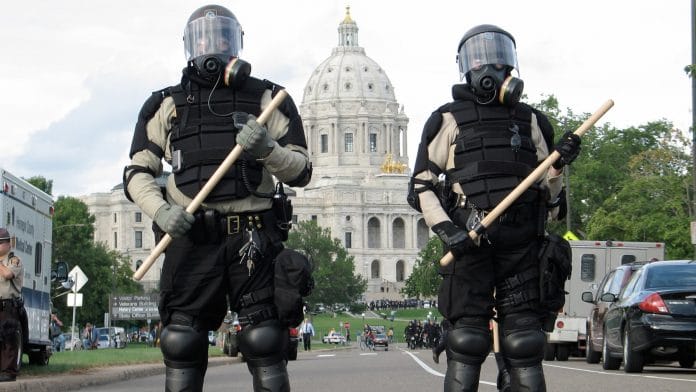 THE POLICE STATE IS OUT OF CONTROL and GETTING WORSE!

Host Dan Yassen talks with guest John W. Whitehead.  He is an attorney and author who has written, debated and practiced widely in the area of constitutional law and human rights. Whitehead’s concern for the persecuted and oppressed led him, in 1982, to establish The Rutherford Institute, a nonprofit civil liberties and human rights organization whose international headquarters are located in Charlottesville, Virginia.

Whitehead serves as the Institute’s president and spokesperson, in addition to writing a weekly commentary that is posted on The Rutherford Institute’s website (www.rutherford.org), as well being distributed to several hundred newspapers, and hosting a national public service radio campaign. Whitehead’s aggressive, pioneering approach to civil liberties issues has earned him numerous accolades, including the Hungarian Medal of Freedom.

Whitehead has been the subject of numerous newspaper, magazine and television profiles, ranging from Gentleman’s Quarterly to CBS’ 60 Minutes.

Articles by Whitehead have been printed in the New York Times, Los Angeles Times, the Washington Post and USA Today, among others.

Whitehead gained international renown as a result of his role as co-counsel in Paula Jones’ sexual harassment lawsuit against President Clinton. Whitehead continues to speak out in defense of a woman’s right to be free from sexual harassment and frequently comments on a variety of legal issues in the national media. He has been interviewed by the following national and international media (partial list):

The author of numerous books on a variety of legal and social issues, as well as pamphlets and brochures providing legal information to the general public, Whitehead has also written numerous magazine and journal articles.

Whitehead’s most recent books include Battlefield America: The War on the American People and A Government of Wolves: The Emerging American Police State. In addition, he wrote and directed the documentary video series Grasping for the Wind, as well as its companion book, which focus on key cultural events of the 20th Century. The series received two Silver World Medals at the New York Film and Video Festival and is now available on DVD.

About Rutherford Institute:  The Rutherford Institute, a nonprofit civil liberties organization based in Charlottesville, Va., is deeply committed to protecting the constitutional freedoms of every American and the integral human rights of all people through its extensive legal and educational programs.

The Institute provides its legal services at no charge to those whose constitutional and human rights have been threatened or violated.

Founded in 1982 by constitutional attorney and author John W. Whitehead, The Rutherford Institute is one of the nation’s leading advocates of civil liberties and human rights, litigating in the courts and educating the public on a wide spectrum of issues affecting individual freedom in the United States and around the world.

The Institute’s mission is twofold:

Whether our attorneys are protecting the rights of parents whose children are strip-searched at school, standing up for a teacher fired for speaking about religion or defending the rights of individuals against illegal search and seizure, The Rutherford Institute offers assistance—and hope—to thousands.

The Rutherford Institute is a 501(c)(3) organization, gifts to which are deductible as charitable contributions for Federal income tax purposes.