The book was published by the American Enterprise Institute, a Neoconservative flagship which has been in the business of destabilizing the Middle East for decades. One can say that the book itself is a colossal piece of propaganda designed to reprogram the masses into believing that Russia and Iran in particular are real threats to the West. In a chapter entitled “Russia: The Kremlin’s Many Revisions,” Jewish Neocon Frederick W. Kagan begins by saying that:

“Russia is on a collision course with the West…The sources of hostility are primarily within Russia. They transcend the aims of Vladimir Putin, springing rather from fundamental problems created during the collapse of the Soviet Union….

“These problems form inherent and irreducible contradictions in Russia’s relationship with the West. Western policy toward Russia must recognize them and accept the reality that Russia will remain hostile to and resentful of the West for some time to come, regardless of Western attempts at reconciliation.”[1]

Complete stupidity. If you have been an astute observer of Russia and of what Putin has said both in public and in print over the past seven years or so, then Kagan’s ridiculous assertion ought to make your blood boil. People like Kagan don’t want to listen at all. 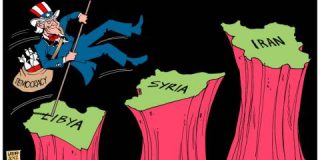 Putin has given more talks and delivered more speeches probably more than any living politician. In fact, journalists and writers sometimes drill him for three hours, and he would respond to various questions without a script.

Moreover, Putin did an entire interview with director Oliver Stone in which he clearly or unambiguously fleshed out his position on the United States, the Middle East, the former Soviet Union, issues such as homosexuality, etc. Every honest observer can either watch the entire interview or read the transcript of the interview. This isn’t hard! It’s not calculus or differential equations. Yet Kagan continues to not only misrepresent Russia and Vladimir Putin but to propound one lie after another.

Moreover, people like Kagan do not want to interact with serious scholars like Stephen F. Cohen of Princeton, who meticulously and methodically argued and documented that the entire media establishment totally misrepresents Vladimir Putin and indeed Russia’s current position. In fact, Cohen’s name and scholarly works are never mentioned in Rise of the Revisionists.

Putin has said very plainly that the West—and the United States of America in particular—has lost its moral and political compass when it began to destabilize one country after another in the Middle East. This has been published and circulated even by Zionist outlets like the Telegraph. For example, Putin said when the United States brutally murdered Gaddafi:

“Who did this? Drones, including American ones. They attacked his column. Then – through the special forces, who should not have been there – they brought in the so-called opposition and fighters, and killed him without court or investigation.”[2]

Frederick Kagan and his wife, Kimberly, played a major role in popularizing perpetual wars in the Middle East.[3] Right after the 9/11 attack, Frederick in particular declared: “We have to take the war to these people [the Palestinians].” 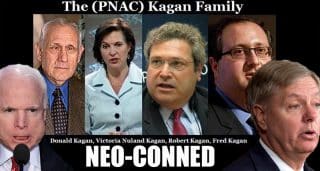 Here is a dialogue between Frederick Kagan, Donald Kagan (Frederick’s father, a scholar at Yale), and an interviewer:

Milt Rosenberg: Are you suggesting that we’ve got to go to war or rather we should..

Donald Kagan: The longer we go chasing around the actual perpetrators our job is going to be next to impossible.

Frederick Kagan: I didn’t say that we know exactly who conducted this attack. What I pointed out is that there are a few groups out there that are dedicated to conducting exactly this sort of attack and I said that we should attack those groups regardless of whether we know exactly which one specifically conducted this. But we hardly need any more evidence to know that it would be a very good idea to take Bin Laden out even if he had nothing to do with this.

Milt Rosenberg: Who else is?

Donald Kagan: And one key place is certainly the Palestinian Authority, these guys are at the center of all sorts of terrorist organizations that we’ve seen operate before.

Frederick Kagan: And we also know furthermore where they’re located. We know that they have extensive bases in Palestine and Palestinian area. —- We have to take the war to these people, I think we should hit them immediately.

When it was widely documented that the Iraq war was a complete disaster, when it was calculated that the war would cost America at least six trillion dollars,[4] Kagan was writing fantasies like this:

“Victory is still an option in Iraq. America, a country of 300 million people with a GDP of $12 trillion and more than 1 million soldiers and Marines, has the resources to stabilize Iraq, a state the size of California with a population of 25 million and a GDP under $100 billion. America must use its resources skillfully and decisively to help build a successful democratically elected, sovereign government in Iraq.”

Frederick Kagan is still thirsty for blood, but any type of blood. He is looking for the blood of the Goyim. He is still perpetuating the crazy idea that Assad has launched “despicable war crimes against his own people”![5]

It was inevitable, therefore, that Kagan would find himself squaring off with Russia, for we all know that Russia doesn’t allow people like Kagan to invent wicked things and dump them on the Assad government. As Sergei Lavrov declared,

“We have the irrefutable data that this [chemical attack] was staged. And special services of a country, which is now seeking to be in the first ranks of the Russophobic campaign, were involved in this staged event.”

Moreover, people like Kagan will never address the fact that Russia in particular was in financial ruin before Vladimir Putin came on the scene. As the late Alexander Solzhenitsyn put it,

“Putin inherited a ransacked and bewildered country, with a poor and demoralized people. And he started to do what was possible—a slow and gradual restoration. These efforts were not noticed, nor appreciated, immediately.”[6]

Solzhenitsyn moved on to say: “In any case, one is hard-pressed to find examples in history when steps by one country to restore its strength were met favorably by other governments.”[7] Perhaps Kagan and his brethren need to start thinking about that.

Some writers like Timothy Snyder have desperately and incoherently claimed that Ivan Ilyin was “Putin’s philosopher,”[8] but Snyder and others people could never understand that Putin’s most important “guru,” as Politico itself put it, is none other than Alexander Solzhenitsyn.[9]

Solzhenitsyn, said the Boston Globe, “embraced Putin’s Russia.”[10] Snyder in particular does not want to see Putin through Solzhenitsyn’s eyes because that would ruin his ideological weltanschauung, which perpetuates one lie after another about Vladimir Putin and Russia. Snyder shot himself in the toes by arguing that Russia invaded Crimea in 2014.[11]

In short, Vladimir Putin, despite his shortcomings, was and is still doing the best he can to restore Russia from the political and financial ruin which New World Order agents have inflicted on her. As our dear friend and colleague Phil Butler has recently put it,

“In the early 2000s, Vladimir Putin was running a country almost destroyed by corruption, foreign interventions, and pirates bent on privatizing anything of value for western investors. The advance of the globalist doctrine had reached the borders of the country; wars were brewed in former Soviet republics where regime changes and color revolutions were not working.

“The notorious Russian mob, the Israeli mob, anybody inside the country that could be bought by western pirates was taking a bite from the Russian legacy. Putin stepped in and sorted it out. Putin did not sell Russia out. This was a capital crime.”

New World Order agents will never come to grip with that fundamental issue. They have recently created an essentially covert operation known as Renew Democracy Initiative, which they say seeks to restore “democracy” and “freedom” in much of the world.[12]

US Secretary of State Mike Pompeo has just landed in Saudi Arabia, and his first move was this:

“We are urging nations around the world to sanction any individuals and entities associated with Iran’s missile program, and it has also been a big part of discussions with Europeans.”[13]

Brian Hook, a senior policy advisor on Pompeo’s team, added: “Iran’s missiles prolong war and suffering in the Middle East, they threaten our security and economic interests and they especially threaten Saudi Arabia and Israel.”[14]

These people have been living in fantasy world for far too long.