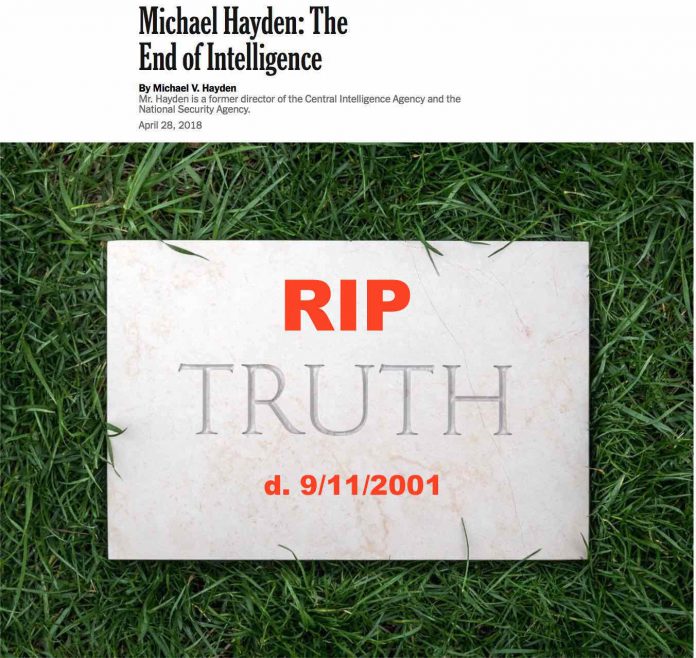 Hayden ran America’s two leading intelligence agencies as the 9/11 false flag operation was developed, executed, and followed up on. Today you can find him at the local pub, or the NYT op-ed page, crying in his beer over the “post-truth world” he helped create.

Memo to Gen. Hayden: If you don’t want a post-truth world, why the HELL did you let the 9/11 big lie go forward? Can’t you see that Trump is the symptom, not the cause, of the demise of truth? You, sir—you and your colleagues who presided over the grossest deception ever perpetrated on humanity—created the problem. Trump is just one ugly symptom of the festering cancer that YOU injected into the American and global body politic.

In the opening paragraphs of his article blasting Trump and the post-truth world, Hayden offers a clue about why he went along with 9/11. After witnessing the 1990s carnage in the Balkans:

“The veneer of civilization, I concluded, was quite thin — a natural thought for an intelligence officer whose profession trends pessimistic and whose work is consumed by threats and dangers. Over the years I had learned that the traditions and institutions that protect us from living Hobbesian ‘solitary, poor, nasty, brutish and short’ lives are inherently fragile and demand careful tending.”

In a conversation with Veterans Today Editor Gordon Duff, who has hung around with high-level military and intelligence insiders, I once asked: In the immediate aftermath of 9/11, why did the huge majority of top military and intel people go along with the official story, which (as you just admitted) they knew to be a lie? Gordon’s answer: the only alternative was civil war.

Maybe Hayden was not directly involved in orchestrating the murderous 9/11 deception. Maybe he, like so many others, went along with it because he didn’t want the USA to implode into Hobbesian chaos and bloodshed.

But as NSA Director from 1999 to 2005, Hayden should have been in a position to see the 9/11 false flag plot as it was finalized and executed. Unless the Israelis and their American assets have completely blinded the NSA or somehow insulated its Director from what the Agency sees, Hayden must have been complicit. That would make him a traitor, a mass murderer, and a big liar on a scale that would make Hitler and Goebbels blush.

In his NYT op-ed, Hayden excoriates the lies of Donald Trump, such as Trump’s “claim that legions of Arabs celebrated wildly in New Jersey as the World Trade Center collapsed. (Trump) defended his calls for the intentional killing of the Sept. 11 terrorists’ families because ‘they knew what was happening’ and had ‘watched their husband on television flying into the World Trade Center,’ something for which there is zero evidence.”

As Hayden surely knows—and may be telling us between the lines—there is indeed “zero evidence” that any alleged hijackers flew into the World Trade Center…or even boarded any of the alleged attack planes.

First, he is obviously nodding and winking at the very real evidence that Israeli Mossad operatives “celebrated wildly in New Jersey” at the destruction of the World Trade Center. Likewise, Hayden obviously knows that the statement “the World Trade Center collapsed” is also a lie, since even the most foolish and myopic observer can see that the buildings did not collapse, they exploded.

“When pressed on specifics, the president has routinely denigrated those who questioned him, whether the “fake” media, “so called” judges, Washington insiders or the ‘deep state.”

But the mainstream media that is so obviously lying about 9/11 (and Skripal, Douma, Charlie Hebdo, JFK, RFK, MLK, the real history of the World Wars, and so many other things) is far more mendacious than Trump has ever dared to suggest.

And the so-called American “justice system” with its “so-called judges” is likewise vastly worse than Trump is telling us—mind-boggling examples include the shafting of 9/11 widow Ellen Mariani and sanctioning of her lawyer by an Israeli agent pretending to be a US federal judge, and the shafting of 9/11 victim April Gallop by George Bush’s criminal cousin posing as a federal judge, and sanctioning of her lawyer for asking Bush’s cousin to recuse himself from a case charging his own cousin with the worst crime ever committed on US soil.

Washington insiders and the Deep State are obviously complicit in all of these crimes and so much more. Trump is, in fact, wildly understating the case.

If Hayden is really looking for an exit strategy from our post-truth quagmire, he should tell the truth about 9/11 boldly and forthrightly—not just hint obliquely at it between the lines.