If you don’t think that Alex Jones has fully embraced the madness of Benjamin Netanyahu, the psychopath who never ceases to lie both in books and in public appearances, then think again.

“After this time, the Iranian Islamic republic will have the ability to construct atomic weapons without the importation of materials or technology from abroad…The first phase of construction and electrical work will be completed within three to four years.”[1]

Read those statements again very carefully. According to Netanyahu’s calculation, Iran should have acquired nuclear weapons by 2000. It’s been more than fifteen years and Iran still doesn’t have nuclear weapons. What’s so interesting is that the intelligence community has universally declared that Iran dropped its nuclear programs a long time ago.[2]

But Israel, of course, was not prepared to deal with that fact because the regime wanted to perpetuate the hoax that Iran was working towards the development of nuclear bombs. When the Israeli regime realized that virtually every serious politician knew that Iran dropped its nuclear program, the same regime rejected the report which was produced by the intelligence community. Defense Minister Ehud Barack said then,

“It is apparently true that in 2003 Iran stopped pursuing its military nuclear program for a certain period of time. But in our estimation, since then it is apparently continuing with its program to produce a nuclear weapon.”[3]

Well, that estimate has been completely false, and the Israeli regime knew pretty well that they were cooking things up. In 2013, the Israeli regime cooked up some evidence saying that Iran already had a nuclear bomb![4] When the United States and much of the world ignored that categorical lie, the regime quietly stopped the propaganda and moved on to other lies.

Netanyahu’s Fighting Terrorism was hailed as a political breakthrough by the Washington Post, the Washington Times, the St. Louis Post-Dispatch, the Detroit News, etc. To this very day, none of these Zionist outlets has ever apologized for their categorical lie.

But Netanyahu didn’t stop perpetuating one lie after another.[5] Iran, he has said in November of last year, is “indefinitely more dangerous” than North Korea! Why? Well, Iran wants to “dominate the world.”[6] He added:

“The one potent force in militant Islam that has emerged is Iran. And it is devouring one nation after the other. It is doing so either by direct conflict, or more usually by using proxies.”[7]

We all agree that Netanyahu is a psychopath. But how does this psychopath continue to propound his lies? Well, he’s got a secret agent in Texas. That agent is none other than Alex Jones. Netanyahu has recently lied again by summoning the statement that Iran is on the brink of producing nuclear weapons. Where did he get the source? From Benjamin Netanyahu. 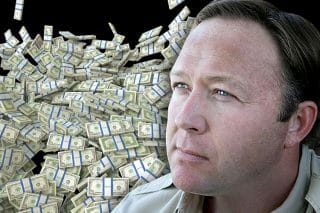 Jones was really fascinated by Netanyahu’s cartoonish charts. Yet Jones forgot that Netanyahu presented a cartoonish version of Iran’s nuclear weapons six years ago, and it was widely scorned and ridiculed by experts and nuclear weapons scholars.[10] Paul R. Pillar, an academic and 28-year veteran of the CIA, declared back in 2012 when Netanyahu drew a cartoon bomb representing Iran’s nuclear bomb:

“One naturally wonders what was going through the mind of the Israeli prime minister, or of his staff or speechwriters, when deciding to include in his address to the United Nations General Assembly such an obvious invitation for satire and ridicule…

“A major topic of postspeech analysis has concerned which cartoons were possible sources of the bomb design. Was it something Wile E. Coyote had used against Road Runner, or did it—and more evidence leans in this direction—come from Boris and Natasha on the old Rocky and Bullwinkle show? There are many satiric directions one could go with Netanyahu’s prop, and Photoshop-adept wags in Israel wasted no time in having fun with some of them.”[11]

Netanyahu cannot be trusted on anything serious. He is a liar, a crook, and a psychopath who ought to be placed in padded cells. If Netanyahu says it is raining outside, make sure you stick your head out and check it yourself. But Alex Jones finds it congenial to perpetuate what the mad man in Tel Aviv has been saying. Jones, whether he likes it or not, is protecting Netanyahu’s derriere.

Alex Jones, as many of his former employees have testified, is not an honest reporter. He is an actor, a showman, and a money grabber. He sometimes prefaces his remarks with a sprinkle of truth here and there, but when it comes to dissecting the Israeli regime, Alex Jones is right in line with Tel Aviv and the Neocons in America. He has even gone on record saying that Iran has already gotten nukes!

Alex Jones has enough evidence on his hand now to change his essentially Zionist position. But since the love of money is the root of all kinds of evil, Jones prefers to live a luxurious life, extracting every penny out of the pockets of his devoted followers, and delivering nothing but half-truths, colossal hoaxes, and sometimes categorical lies.