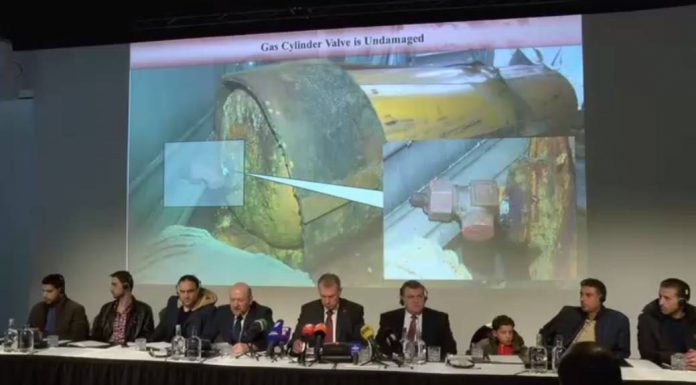 Russia’s envoy to the OPCW said it was crucial to avoid new false-flag attacks in Syria and that Moscow “won’t allow” US military action there, as he described details of Russian findings on the site of the alleged Douma incident.
–

New false-flag operations against Damascus are “possible, since our American partners are once again threatening to take military action against Syria, but we will not allow that,” Russia’s permanent representative to the Organization for the Prohibition of Chemical Weapons (OPCW), Aleksandr Shulgin, said during a press conference in The Hague on Thursday.

The meeting was called by Russia’s OPCW mission and featured witnesses of the April 7 alleged chemical incident in the city of Douma. It highlighted the findings of Russian military experts, who were among the first to reach the site of the purported attack and locate the “munitions” that supposedly hit the residential buildings.

“Russian experts performed a detailed analysis of the information on the ground,” Major-General Igor Kirillov, the head of Russia’s Nuclear, Biological and Chemical Protection (RKhBZ) Troops, said. “Two gas cylinders, allegedly dropped by the government forces from helicopters, were found in two apartments.” 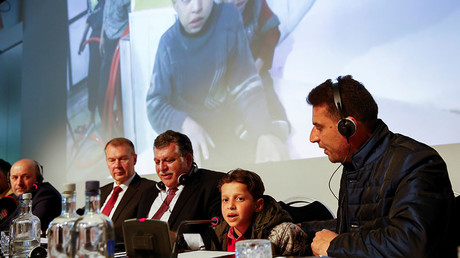 The cylinders and the damage they supposedly caused did not fit the tale of an airstrike entirely, Kirillov said. One of the cylinders lacked any makeshift upgrades, such as fins, to make it usable as an aerial munition, and, surprisingly, it was not even deformed.

“An empty gas cylinder found at the top floor. The apartment was partially destroyed earlier by an aerial bomb explosion, parts of roof and outer wall were missing,” Kirillov stated. “Other walls were sprayed with shrapnel. It’s quite peculiar that the cylinder was not deformed, which doesn’t fit its purported fall from a big altitude on concrete floor.”

The other cylinder, while fitted with some crude fins, also remained in nearly pristine condition despite its “fall.” The device miraculously did little to no damage to the room it supposedly hit, besides a large hole in the ceiling, which, however, was unlikely made by the object, according to military specialists.

“The cylinder has partially retained impermeability and is almost undamaged, which is impossible after a fall from some 2,000 meters, the usual altitude used by the Syrian army helicopters,” Kirillov said. “A tail part of an unguided rocket has been uncovered on the roof near the gap in the ceiling. The munition was likely to make the hole, but we cannot rule out an artificial nature of the damage made to the roof, since we discovered a pinch bar at the stairwell of the building.”

The cylinder was likely hauled by the “authors of the staged video” from outside, the official stated, as “multiple chips and dragging marks at the stairwell” indicated. An apartment below was being used by its owner to breed chickens, and all the livestock miraculously “made through the so-called chemical attack alive,” according to Kirillov.

“Moreover, the RKhBZ troops have uncovered a booby-trapped chemical laboratory and chemical stockpile in the city of Douma, which was liberated from the militants. They’ve been presumably used by the terrorists to manufacture toxic substances,” the official said.

He added that a chlorine-filled canister that was very similar to the purported munitions used during the Douma incident was recovered from the militant-run warehouse. OPCW-controlled substances, which can be used to produce mustard gas, have been also found there.

The Douma incident was featured in videos released by the controversial White Helmets group and spread through militant-linked social media accounts. It was seemingly taken at face value by the US and its allies, who promptly pinned the blame on Damascus and launched a massive missile strike on the country in “retaliation” on April 14. The attack came hours before the OPCW experts were set to embark on their fact-finding mission in Douma.

The experts have already visited the site of the purported incident. Shulgin, meanwhile, called on the OPCW to visit the chemical laboratories left behind by the militants to see for themselves who is actually behind the use of chemical arms in Syria.

“We urge the OPCW technical secretariat and experts to make use of their time in Syria and examine the undercover underground chemical laboratories of the militants, the terrorists, who used them, as we believe, to produce chemical munitions, including those used for all kinds of false flag attacks,” Shulgin stressed.