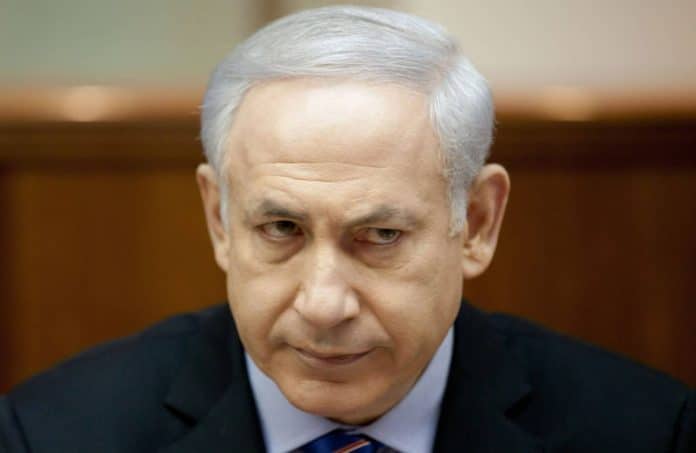 http://www.theamericanconservative.com/articles/did-israel-inadvertently-make-case-for-staying-in-nuke-agreement/
There is something tragic about Israeli Prime Minister Benjamin Netanyahu. The harder he tries, the more he fails. That has been the case with many of his attempts to sabotage diplomacy with Iran and push the US to take military action against the country. And that was certainly the case with his underwhelming powerpoint presentation Monday. What was supposed to be a smoking gun to once and for all nix the Iran nuclear deal, inadvertently made a powerful case as to why the the deal must remain in place.

The Israeli government had promised “significant new revelations” about the nuclear program. Yet Netanyahu offered nothing new. The bulk of his presentation focused on what the world already knew: That between 1999 and 2003, Iran had engaged in activities with possible military dimensions.

As I describe in Losing an Enemy: Obama, Iran and the Triumph of Diplomacy, these past Iranian activities constituted a tricky dilemma during the nuclear talks. If it was revealed that the Iranians had indeed engaged in illegal military research, that could jeopardize the entire agreement, as voices would be raised to have it punished for its past violations. Completely disregarding it without allowing the IAEA to complete its investigation—which the Iranians had not been cooperating with—was also not an option. What it came down to was a choice between punishment for Iran’s past violations and guarantees that those violations would never be repeated in the future.

The obvious choice for Obama was the latter: punishing Iran for its past errors was of little value if punishment came at the expense of a deal that would prevent Iran from building a bomb. Politically, however, this choice was feasible only if the IAEA could complete its investigation—with the cooperation of the Iranians—to make a final judgment on the issue and close the file. The P5+1 needed neither an admission of guilt nor a guilty verdict; they just needed Iran’s cooperation to complete the investigation.

The Iranians feared that giving the IAEA more access would only lead to more demands and investigations. To Iran, it was critical that any investigation would be time-limited, so it couldn’t drag on indefinitely, and delinked from the sanctions relief process, so that the decision to lift sanctions couldn’t be held hostage to the PMD investigation.

Eventually, a compromise was reached in which the Iranians would make their documents accessible and their scientists available for interviews for the purposes of producing a time-limited report that would contain both the IAEA’s assessments and Iran’s responses and contributions. The report would essentially include two narratives, which meant that there wouldn’t be an authoritative judgment. More importantly, the sanctions relief process would be linked to the completion of the IAEA investigation and not its conclusion. That is, the IAEA would have to report only that Iran had cooperated with the investigation and that the IAEA’s questions were answered in order for the green light for sanctions reform to be lit.

On July, 2015, the head of the IAEA flew to Tehran and concluded a final agreement that established a timeline for resolving the question of Iran’s past activities whereby Iran would turn over all information requested by the IAEA, and the IAEA would provide its final assessment by December 15 of that year.

The IAEA issued its report on December 2, 2015 concluding that Iran had pursued a nuclear weapons program prior to 2003, but that this organized program ended that year and that there was no evidence that any undeclared activities had taken place since 2009.

Following the report, the 35-member IAEA Board of Governors voted unanimously to conclude the investigation into Iran’s past weaponization work. The case was officially closed.

Now, without presenting any new information – and without even attempting to claim that Iran’s undeclared activities had continued beyond 2009 or 2015 – Bibi wants to convince the world that he has discovered something new.

As one former IAEA official publicly commented: “I just saw a lot of pictures I had seen before.”

Iran’s past military activities are precisely why the JCPOA is needed: The deal significantly limited Iran’s program and closed off all of Tehran’s pathways to a bomb. And thanks to the inspections regime, Iran cannot engage in any such clandestine activities without getting caught.

All of these restrictions, limitations and inspections will be lost if Donald Trump follows Netanyahu’s advice and kills the deal on May 12.

And therein lies the tragedy of Netanyahu.

By helping to kill the Iran deal doing so, Netanyahu may advance his own political interest, but only by undermining that of Israel. Bibi may consider himself the biggest political winner of the Iran deal’s collapse. Yet, Israel will count among some of the biggest losers of this diplomatic travesty.

Trita Parsi is the author of Losing an Enemy: Obama, Iran and the Triumph of Diplomacy and president of the National Iranian American Council.