Newsweek, one of the flaming Zionist outlets out there, has recently reported that US soldiers are secretly helping “Saudi Arabia’s war in Yemen.”[1] It stated:

“U.S. Army Special Forces have been covertly aiding in Saudi Arabia’s war against Zaidi Shiite Muslim insurgents in neighboring Yemen, where the rebels control the capital and often fire ballistic missiles, according to a new report by The New York Times.”[2]

This is just complete lunacy when you plug Syria into the political equation. We have been told ad nauseam that Assad needs to be removed from power because he is allegedly killing civilians in the region. Donald Trump, Benjamin Netanyahu’s finest puppet in the United States, has said repeatedly that Assad used chemical weapons to gas his own people and that the United States ought to remove him from power.

But the United States is aiding and abetting terrorist states like Saudi Arabia, which has a history of liquidating innocent Yemeni men, women and children. As we have reported in the last article:

“In the span of four days earlier this month, the Saudi Arabia-led coalition in Yemen bombed a Doctors Without Borders-supported hospital, killing 19 people; a school, where 10 children, some as young as 8, died; and a vital bridge over which United Nations food supplies traveled, punishing millions….

“More than 14 million Yemenis suffer dangerous levels of food insecurity — a figure that dwarfs that of any other country in conflict, worsened by a Saudi-led and American-supported blockade. One in three children under the age of 5 reportedly suffers from acute malnutrition. An estimated 90 percent of food that the United Nation’s World Food Program transports to Sana traveled across the destroyed bridge.” 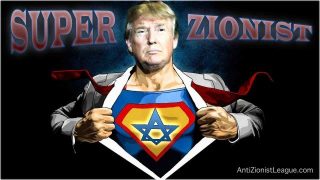 Donald Trump knows all about this. Now there is no way the Zionists and New World Order agents can balance this diabolical equation. You simply cannot punish millions of civilians in Yemen and then give the impression that you are fighting for civilians in Syria! As the New York Times itself put it, you cannot allow Saudi Arabia to kill civilians and then look “the other way.”[3] This is a blatant contradiction.

The only way the United States and New World Order agents are able to unleash this wicked and incoherent ideology upon the masses is because the Israeli regime is using US officials like a remote control. Neocon flagships such as Commentary are also recruiting Christian Zionists to spread their lies and propaganda. It is just plain silly for anyone to say that there ought to be a “Christian case for striking Syria”[4] when the vast majority of Christians in Syria and elsewhere actually oppose this diabolical plan![5]

If Christian Zionists want to talk about “the need for a basic order in which dictators don’t gas children,”[6] why can’t they put Saudi Arabia into the Zionist equation? Don’t they know that Saudi Arabia has used chemical or biological weapons in Yemen?[7]

In response to the recent report on the US supporting Saudi Arabia, Sen. Tim Kaine declared,

“The Trump administration’s purposeful blurring of lines between train and equip missions and combat, from Niger to Yemen, is unacceptable. It runs afoul of our system of checks and balances in war powers and is deepening our involvement in endless wars without a vote of Congress.”

If civilians are important, then they ought to be important in Syria, Iraq, Afghanistan, Libya, Yemen, Saudi Arabia, Israel, and everywhere on the planet. Any political move or enterprise has to be universalized, otherwise it will turn out to be morally worthless and intellectually unlivable.

This is why again Kant would almost certainly have a major problem with the Israeli regime because the Zionist project can never be universalized. Never! No doubt that some Jewish scholars have already called Kant and Hegel anti-Semites.[8]