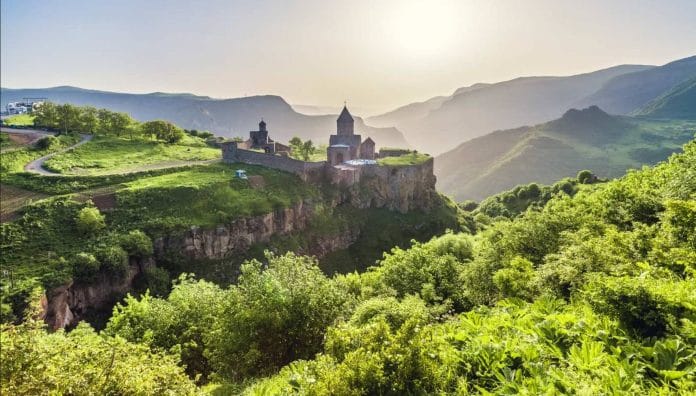 As we write this, massive peaceful civil actions against Armenia’s establishment have continued under the leadership of Nikol Pashinyan, a National Assembly (N.A.) member who is part of the opposition Yelk (Way Out) Alliance. Though widely unpopular Prime Minister Serzh Sargsyan has been forced to resign, his Republican Party (RPA) still has a narrow majority (58 of 105) in the N.A.  Most observers believe that the RPA members were elected through fraud, bribery, and intimidation.

The RPA’s politicians and oligarchs are also generally blamed for stealing billions of the country’s wealth; violating civil rights; debasing the judiciary and civil service; keeping the talented Armenian Diaspora at arm’s length; and failing to successfully address Armenia’s many problems: corruption, a less-than-robust economy, unemployment, outward migration, and more.

A bright spot: Christian Armenia and its brother Artsakh/Karabagh Republic survive, even though blockaded by genocidal Turkey and Turkic/Muslim Azerbaijan who outnumber Armenians by 90 million people.  This miracle is due to the tenacity of Armenia’s people and armed forces.

As Armenia is a long-time friend and admirer of our country, we Americans need to understand it.

The current revolution is home-grown and purely Armenian. Outside powers – whether countries or organizations – neither initiated nor control the revolution.  Still, major nations definitely have strong opinions, usually unstated, about the present crisis.

Russia loathes the revolution. Russia wants Armenia to continue to be highly dependent on it for natural gas, the nuclear power plant and energy grid, investments, sophisticated weapons, and the right to travel to Russia to work and sometimes deposit stolen money. Ongoing corruption in Armenia makes it easier for Russia to bribe, intimidate, and blackmail dishonest leaders and oligarchs, represented mainly by the RPA.  A Russian base guards Armenia’s border with Turkey.

Why is Russia so intent on controlling its small ally? Because without Armenia, Russia would lose its grip on the Caucasus, Caspian Sea, and probably Central Asia. The US/NATO/EU/Turkey (“Western Bloc”) would then move in. Thus perched along the Russian Bear’s soft underbelly, NATO would slice it open and have his insides for dinner. Thus, Russia needs Armenia far more than it cares to admit.

Georgia was coopted by the Western Bloc years ago. It has invested billions in Georgia, which desires NATO membership as protection against Russia.

Azerbaijan, corrupt and a virtual dictatorship, but flush with oil and gas income, has also expressed interest in joining NATO.  Over 27 years, the Western Bloc has invested untold billions in Azerbaijan in such sectors as energy, banking, hotels, aviation, agriculture, and consulting.  The Western Bloc has also constructed major oil and gas pipelines from Azerbaijan’s Caspian fields through Georgia and into Turkey and beyond.  More such pipelines (to supply Europe) are planned.

Interestingly, Israel receives around 40% of its oil from Azerbaijan and sells it billions in weapons. Major Jewish organizations such as the American Jewish Committee provide Azerbaijan political support while, sadly, a coterie of Jewish writers constantly and unfairly berate Armenia in the US and international media.

Turkey’s long-standing dream is a pan-Turkic path from Turkey to Azerbaijan, then across the Caspian Sea to the four Central Asian Turkic countries: Kazakhstan, Kyrgyztan, Turkmenistan, and Uzbekistan.  The Western Bloc has implicitly bought into pan-Turkism in order to exploit the region’s energy deposits and, as explained, perch along Russia’s underbelly.

Georgia – predominantly non-Turkic and Christian – serves as the Western Bloc’s door into the Caucasus.  Of course, Georgia remains under Russian pressure. Witness not only Russia’s support for Georgia’s breakaway regions of Abkhazia and South Ossetia, but also Georgia’s defeat in the 2008 Russian-Georgian war.  All that pressure becomes meaningless, however, were Russia to lose Armenia to the Western Bloc.

Russia would then have no military or operational base in the Caucasus.  Moreover, if Armenia got off its dependence on Russian energy and military equipment, Russia would have little ability to pressure Armenia, especially as the two lack a common border.

The Western Bloc’s path to the Caspian Sea (which a NATO fleet would dominate) and Central Asia would be wide open.  NATO would probably eventually sit along Iran’s northern border.

‘As Armenia goes, so goes the Caucasus, Caspian, and Central Asia’ is a fair statement. For Russia, Armenia is vital – perhaps a matter of life or death. Russia needs Armenia far more than it will admit.

Unfortunately, many Armenians who see Russia as a Christian “big brother” don’t realize that the Russian-Armenian relationship should be a two-way street.

Would Armenia ever join the Western Bloc?

To dissuade it from explicitly joining the Western Bloc, Russia is flattering Azerbaijan as a “strategic partner” (which it really isn’t) and sells it weapons that it will use against Armenia/Artsakh. Russia is also cozying up to Turkey to pull it away from the Western Bloc.  It won’t work.  Turkey and Azerbaijan (“One nation, two states”) are historically and inherently hostile to Russia.   But it makes Armenia nervous nevertheless.

Armenia’s main concern is security. Armenians remember the Genocide of 1915-23 and numerous anti-Armenian massacres committed by Turks against Armenians in the last 150 years.  Since 1991, Turkey has threatened several times to attack Armenia. In 1993, Turkey and the Muslim Chechen Speaker of the Russian Duma hatched a plan to invade Armenia while Russia stood aside. Turkey also arms and trains the Azerbaijani army.

Armenians know this history very well. Western Bloc attempts to reassure Armenia that Turkish intentions are benign are understandably treated with derision. With Turkey’s return to its traditional authoritarianism and repression, and its ongoing alliance with jihadists in Syria, even the Western Bloc is reconsidering its long-standing sycophantic treatment of Turkey.

However, Armenians know that Russia may go too far in accommodating Turkey and Azerbaijan and thereby betray Armenia.

After WWI, Turkey used weapons supplied by Bolshevik Russia to exterminate the former’s remaining Armenian citizens and invade the independent Republic of Armenia.  Russia also gifted Armenian territory, including Artsakh and Nakhichevan, to Azerbaijan. Russia prevented Armenia from retaking Western Armenia (now eastern Turkey), which Armenia was entitled to according to the Treaty of Sevres (1920) signed by the European powers.  Russia could sell out Armenia to Turks and Azeris in similar ways today.

It’s possible, therefore, that Armenia could turn to NATO as a protector. This is risky, however. NATO member Turkey far exceeds Armenia in military weight. Moreover, the West, though historically sympathetic to Christian Armenians for hundreds and even thousands of years, has generally helped Armenians only in humanitarian – not military – ways.

Still, it is possible for Armenia to switch sides if Russia continues to treat Armenia as little more than a pawn. In fact, one pro-Russian writer just called Armenia a “pawn.”

Indeed, Armenia has excellent relations with the Western Bloc (except for Turkey) and recently signed a partnership agreement with the EU.  The Western Bloc, of course, silently hopes that the current revolution and possible internal liberalization in Armenia will someday turn it away from Russia.

Shaping its Own Destiny

The RPA, Russia’s favorite pin-up boys, is trying to depict Nikol Pashinyan as anti-Russian and thus a security risk.

However, Pashinyan has firmly stated that Armenia’s alliance with Russia will not change, nor will Armenia drop out of the Russian-led Eurasian Economic Union (EEU) and CTSO (Collective Security Treaty Organization) if he becomes Prime Minister.

The RPA claims that Pashinyan is anti-Russian because he once opposed his country’s entry into the EEU and preferred an association agreement with the European Union. The charge is absurd. Until Russia twisted his arm in 2013, even then-President Serzh Sargsyan was set to sign an agreement with the EU.

Armenians appreciate Russia’s help. But they refuse to be taken for granted and betrayed yet again.

Armenia’s populace simply wants Armenia to become stronger and more self-confident in every way – for Armenians’ own sake and so that Russia treats it equitably.

This is neither anti-Russian nor pro-Western Bloc.  It’s just the right thing to do.

The author is an Armenian American freelance journalist.  Many of his articles are archived at www.armeniapedia.org/wiki/David_Boyajian.