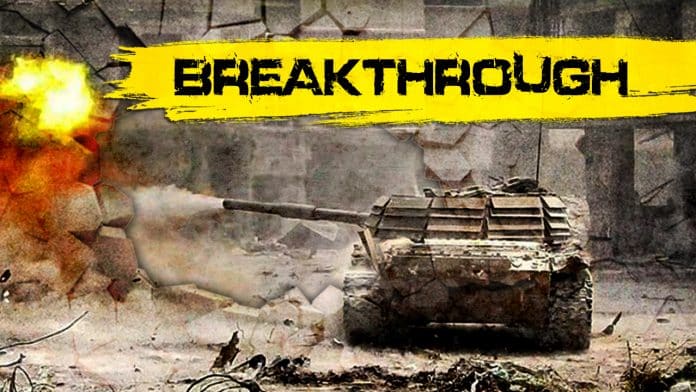 Syrian government forces have achieved an important breakthrough in their battle against ISIS in southern Damascus.

On May 3, the Syrian Arab Army (SAA), the Palestinian Liberation Army, Liwa al-Quds and other pro-government factions split the ISIS-held pocket into two separate parts by capturing several positions between the district of al-Hajar al-Aswad and the Yarmouk refugee camp. Government forces developed their advance and captured the Waseem housing project in Yarmouk and the al-A’lam roundabout in al-Hajar al-Aswad.

During the clashes the SAA captured a heavy VBIED and killed a few ISIS members, according to pro-government sources. The ISIS-linked news agency Amaq claimed that 39 government fighters had been killed by ISIS units. However, this number is a clear exaggeration.

The SAA’s recent gains came amid the developing evacuation agreement in the eastern part of the pocket. On May 3, a first batch of militants and their families were taken from the districts of Aqraba, Beit Sahm, Yalda and Babbila by 31 buses. A second batch is set to leave on May 4.

Once the evacuation is finished, the SAA will get more resources to increase pressure on the remaining ISIS members in southern Damascus and to secure the entire countryside of the Syrian capital.

The Syrian-Iranian-Russian alliance is also working to re-establish control over the Rastan pocket in northern Homs.

On May 3, Russian Military Police removed the barriers from the Hama-Aleppo highway in the pocket and deployed several units near the towns of al-Rastan and Talbiseh, according to Syrian opposition sources. At the same time, militants in al-Rastan and Talbiseh started handing over their weapons to the SAA. The developments came as a part of the reconciliation agreement reached on May 2.

According to reports, members of militant groups that do not want to settle their legal status will start withdrawing from the Rastan pocket on May 5. However, the internal tensions among Rastan militants may lead to the delay of the evacuation and a new round of escalation in the area. A part of the local militant groups opposes the reconciliation agreement.

On May 3, the US-backed Syrian Democratic Forces (SDF) launched an attack to capture the town of Hajin in the province of Deir Ezzor from ISIS. According to the SDF media center, dozens of local ISIS members already surrendered to the SDF near the town. The real clashes for Hajin are yet to start.

Previously, ISIS has repelled a few attempts by the SDF to capture Hajin. This time the situation may be a quite different as it seems that the SDF and the US-led coalition really want to achieve some fresh progress against the terrorist group.