Steven Spielberg is an interesting film director and ideologue. He has directed movies such as Schindler’s List and Amistad. These propaganda films have almost certainly changed the way people think about the so-called Holocaust and slavery in America.

Both movies are dazzlingly powerful and culturally alluring,[1] but both films are based on historical myths and fabrications.

Rotten Tomatoes tells us that “Amistad tells an important story with engaging sensitivity and absorbing skill.” But historian Eric Foner of the University of Columbia wasn’t persuaded. He said:

“The Amistad case revolved around the Atlantic slave trade — by 1840 outlawed by international treaty — and had nothing whatsoever to do with slavery as a domestic institution.

“Incongruous as it may seem, it was perfectly possible in the nineteenth century to condemn the importation of slaves from Africa while simultaneously defending slavery and the flourishing slave trade within the United States.”

Let’s start with Amistad. Spielberg never told his movie goers that the slavery business in America was an essentially Jewish enterprise. We have exhaustively documented this in numerous articles.[2]

To direct a movie which shows that Jewish businessmen were at the center of the slavery business would ruin Jewish manipulation of blacks in America, so Spielberg puts the blame at the feet of Europeans, the very people who single-handedly abolished slavery in the Western world.

Since Spielberg is a Jewish ideologue, which is to say that he espouses some form of Jewish messianic vision of the world, he has to perpetuate lies and fabrications as historical truth. And since he now holds much of the film industry on the palm of his hand, he has to spread the Holocaust gospel, which deliberately excludes every tragic event Jewish radicals like Lenin and Marx have ever invented.

Now Spielberg has something deep to say about the “Holocaust.” He has posited that every high school in America should be required to teach the “Holocaust.” It should be required because there shall be no other gods before the Holocaust. As Rabbi Avi Weiss put it, “Auschwitz is a sacred place of Jewish memory,” and it is not a place for institutions like “the Catholic Church.”[3] Here is Spielberg at his best:

“It’s not a prerequisite to graduate high school, as it should be. It should be part of the social science, social studies curriculum in every public high school in this country.”[4]

Spielberg was somewhat bewildered because, according to the Jerusalem Post, “41% of Americans – and two thirds of millennials – didn’t know what Auschwitz was. The poll, released by the Claims Conference earlier this month, showed that a whopping 22% of millennials hadn’t even heard of the Holocaust.”[5]

Perhaps they hadn’t even heard of the Holocaust because the story itself is fraught with puzzlement rather than historical fact and anyalysis. Perhaps it is one reason why people are being jailed in Europe for even questioning certain aspects of the story. 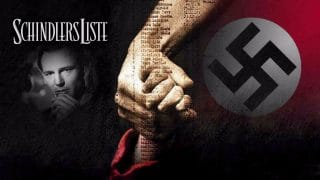 After Schindler’s List was released, Spielberg declared: “I pleaded with the teachers to please teach this in your schools. I said that’s the most urgent thing you could do – you need to teach this story.”[6]

Spielberg can never include the Soviet collectivization and the terror-famine in his equation because that would ruin his Jewish ideology. In fact, Spielberg is obsessed with destroying Nazis in several of his movies because he grew up “hearing his parents talking about ‘the murdering Nazis’ and hearing stories from his ‘verbal grandparents who constantly spoke about’ the extermination of Jews.”[7] Spielberg admitted:

“In a strange way my life has always come back to images surrounding the Holocaust. The Holocaust has been part of my life, just based on what my parents would say at the dinner table. We lost cousins, aunts, and uncles.

“When I was very young, I remember my mother telling me about a friend of hers in Germany, a pianist who played a symphony that wasn’t permitted, and the German came up on stage and broke every finger on her hands. I grew up with stories of Nazis breaking the fingers of Jews.”[8]

It is understandable that Spielberg would later use films and movies to avenge what he thought was Nazi mistreatment of Jews. He even used Jewish mysticism in his films to destroy Nazis. As biographer Joseph McBride points out, “The unleashing of the magical powers of the Ark of the Covenant to destroy its Nazi captors in Raiders of the Lost Ark reflected Spielberg’s affinities with Jewish mysticism, but in the context of a frivolously escapist storyline.”[9]

So Spielberg is not really interested in the peasants who got exterminated by Lenin and Stalin. Keep also in mind that Stalin liquidated more than ten million peasants long before rise of Hitler.[10]

Moreover, Spielberg wouldn’t dare to include Mao’s great famine into his story because Mao, using the Bolshevik ideology (which was largely a Jewish movement), liquidated at least forty million Chinese.[11]

Spielberg wants to focus on Nazi Germany because he and his brethren think that the so-called Holocaust is unique. Jewish scholar Jacob Neusner declared that “the Holocaust…was unique, without parallel in human history.”[12] Daniel Goldhagen made similar claims in his book Hitler’s Willing Executioners. French Jewish historian Pierre Vidal-Naquet espoused similar views.[13]

Many Jewish writers indirectly advocate this form of doctrine in one way or another. For Deborah Lipstadt, downplaying the “uniqueness” of the Holocaust is to be a Holocaust denier.[14]

German historian Ernst Nolte made the mistake of comparing the Holocaust to other crimes that have committed in history, such as Stalin’s extermination of the Russian people, the Armenian genocide, and Pol Pot’s crimes against humanity. For this, Lipstadt labeled him a Holocaust denier. Historian Joachim Fest defended Nolte on historical and rational grounds, and received the same treatment.[15]

Yet when confronted with the historical truth, Lipstadt hides behind semantics:

“The brutal Armenian tragedy, which the perpetrators still refuse to acknowledge adequately, was conducted within the context of a ruthless Turkish policy of expulsion and resettlement. It was terrible and caused horrendous suffering but it was not part of a process of total annihilation of an entire people.

“The Khmer Rouge’s massacre of a million of their fellow Cambodians…was carried out…as a means of subduing and eliminating those whom Pol Pot imagined had collaborated with the Americans during the previous hostilities.”[16]

That’s the type of argumentation that these people are trying to spread. They don’t care about what the Allies did to German and Japanese civilians after World War II; in fact, they don’t give a damn about those innocent people. They want to force the so-called Holocaust down everyone’s throat, whether people like it or not.

Thankfully, people are waking up. The Holocaust establishment is intellectually and historically deteriorating. The reason is simple: you either ally with the truth or the truth will eventually break you.