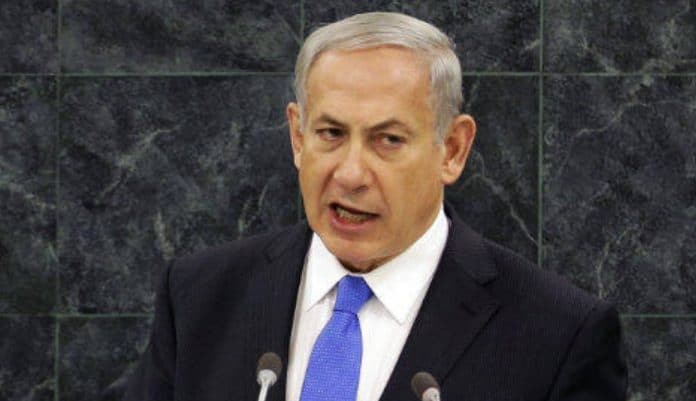 During an internationally-televised speech, Israeli Prime Minister Benjamin Netanyahu accused Iran of lying about its nuclear program after signing the 2015 deal – his remarks have prompted speculations over Tel Aviv’s alleged possession of weapons of mass destruction.

Israel is widely suspected of possessing weapons of mass destruction, supposedly developed in 1948-1949, with an estimated arsenal of up to 400 warheads. Despite the fact that Mordechai Vanunu, a former worker at the Israeli Dimona nuclear reactor, blew the whistle on Tel Aviv’s nuclear program in 1986, Israel still maintains a policy of “nuclear ambiguity” – never denying or admitting to having nuclear arms.

In the 1950s and 1960s, the Israeli government under Prime Minister David Ben-Gurion reportedly lied to the United States and stonewalled Washington’s requests for information on weapons development and refused to accept visits from the International Atomic Energy Agency. Tel Aviv reportedly referred to its Dimona reactor, provided by France, as a “textile plant” and a “metallurgic research installation,” allegedly in a bid to hide the truth from American nuclear inspectors.

“I do not know of any other nation, whose neighbors declare that they wish to terminate it, and not only declare, but prepare for it by all means available to them.  We must have no illusions that what is declared every day in Cairo, Damascus, Iraq are just words. This is the thought that guides the Arab leaders,” Ben-Gurion said after his resignation as prime minister.

While there are many speculations about Israel having nuclear weapons, no one really knows how big its arsenal is. Back in 2008, former US President Jimmy Carter estimated that Israel had at least 150 atomic weapons in its stockpile.

“The US has more than 12,000 nuclear weapons; the Soviet Union [sic] has about the same; Great Britain and France have several hundred, and Israel has 150 or more,” Carter told the press.

In 2014, Carter reconsidered his estimates, suggesting that “Israel has, what, 300 or more, nobody knows exactly how many.”In a private email message, written several months before the 2015 Iran nuclear deal was inked, and leaked in September 2016, former US Secretary of State Colin Powell allegedly exposed the real number of Israeli warheads at the time.

“The boys in Tehran know Israel has 200, all targeted on Tehran, and we have thousands.”

READ MORE: US: Israeli Nukes Not Up For Debate Until State is Recognized by Arab Neighbors

The country is believed to have anywhere between 80 and 400 nuclear warheads, and the ability to deliver them by aircraft, submarine-launched cruise missiles, and the Jericho “family” of intermediate to intercontinental range ballistic missiles.

While the signatories to the Nuclear Non-Proliferation Treaty have consistently pushed for a nuclear-free zone in the Middle East, with the UN attempting to make Israel sign the agreement, Tel Aviv has steadfastly refused to join the international community. Israel, while neither confirming nor denying its nuclear program, has repeatedly stated that the issue of nuclear weapons could not be dissociated from security issues in the region, including the country’s historically hostile relations with its Arab neighbors.

In 2010, all 189 parties to the treaty urged for a conference in 2012 to discuss de-nuclearization of the Middle East, calling on Israel to sign the pact and make its atomic facilities subject to UN inspections. Israel, however, rejected the “flawed and hypocritical” document.

“As a non-signatory state of the NPT, Israel is not obligated by the decisions of this conference, which has no authority over Israel,” the Israeli government said in a statement. “Given the distorted nature of this resolution, Israel will not be able to take part in its implementation.”

In 2015, Egypt sought to convince the international community to discuss Israel’s alleged nuclear weapons via resolutions, but its attempt to push for a nuclear-free region without discussion of regional security issues at a United Nations conference was blocked by the United States, Canada and the UK.