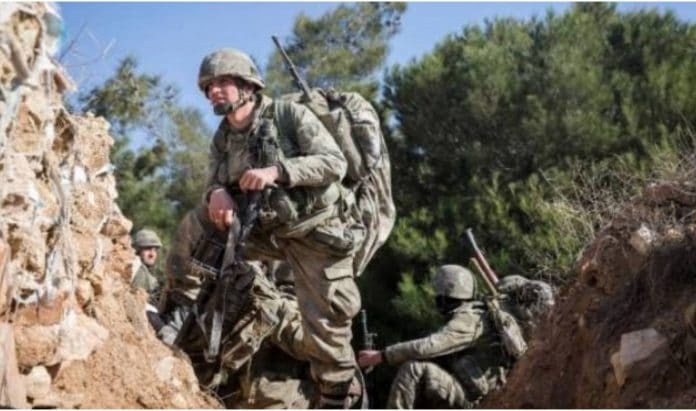 TEHRAN (FNA)- The Turkish Army has arrested a sum of 3,000 civilians in Afrin ever since it occupied the city in Northwestern Aleppo and transferred them to different locations, a Kurdish media outlet reported on Saturday.

Hawar news quoted well-informed sources in Shih region in Afrin as reporting that the army has taken into captivity a sum of 3,000 civilians in several villages in Shih and transferred them to the village of Mirkan in Mobata region.

Hawar news further said that some of the jailed civilians have been transferred to the village of Qarmitlaq and some others have been sent to Turkey to be kept in detention centers there.

It further said that the captured civilians have been tortured severely by the army and its allied militants, adding that the Turkish soldiers have been shooting around blindfolded captives to scare them.

In the meantime, a local source on Bolboleh region said that the Ankara-backed militants have forced villagers in Khalika to leave their houses to replace them with almost 2,000 militants and their family members that had left Douma region in Damascus province under an evacuation agreement with the Syrian Army.

The source further said that the Ankara-backed militants have been forcing men and women in the villages of Shirwa and Bolboleh region to carry out hard jobs, including digging trenches and cooking food and serving the militants.

In a relevant development, the London-based pro-opposition Syrian Observatory for Human Rights (SOHR) reported last month that the Ankara-backed Free Syrian Army (FSA) had started blackmailing civilians and looting their assets in Afrin region in Northwestern Aleppo amid reports on the Turkish Army’s move in replacing locals in Afrin with Eastern Ghouta terrorists.

The SOHR said that the FSA militants started stealing and looting properties and assets of local people that are still in Afrin region, adding that the FSA also was seizing assets of people that have left the region after the start of Operation Olive Branch.

The SOHR further said that the FSA also embarked on accusing young people and men of fake crimes to detain and torture them.

It went on to say that the FSA later called for a hefty amount of money as ransom to free the detainees.

The FSA also embarked on expelling several families in Shera region in Northeastern Afrin, accusing them of affiliation with Kurdish fighters, the SOHR said, adding that the FSA is settling Eastern Ghouta terrorists in Afrin region after expelling the locals.