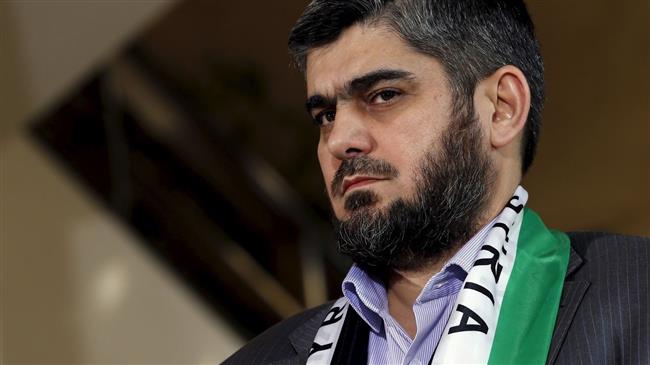 [ Editor’s Note: The Western military industrial complex is not the only party milking the wars. The jihadi leaders have demonstrated talented sticky fingers. Mohmmed Alloush we the face of the Saudi backed opposition group who was always demanding preconditions from Syria at meeting where no preconditions were allowed.

He would storm out of meetings, trying to kill them, but we now learned he have another motivation. He also did not want peace because the terror proxy wars had become a cash cow for him, also.

Now that he has been blown, will his followers take jihadi revenge on him? What’s one more head added to the pile that is so big already. Dear Mohammed, enjoy yours while you still have it … Jim W. Dean ]

Former head of the political body of the so-called Jaish al-Islam militant group has reportedly stolen millions of dollars from the money donated by regional sponsors of Takfiri terrorist outfits in Syria, and used the money to buy restaurants and commercial centers in Turkey and Saudi Arabia.

The Arabic-language Damascus Now news website reported on Sunday that Mohammed Alloush has appropriated some $47 million over the past few years, and hid it from the leaders of the terrorist organization.

The report added that Alloush then used the money to purchase real estates in Turkey and in Saudi Arabia, including Ewan Restaurant, car washes and body shops in Istanbul besides Rebou al-Sham Restaurant and three textile markets run by Bilal Oyoun in the Saudi capital city of Riyadh.

Jaish al-Islam commanders have reportedly called on Alloush to return the stolen sum but all to no avail. Alloush was one of the founders of Jaish al-Islam militant group, and until recently led its political office.

He resigned from his post on May 3, after the group sustained a series of humiliating defeats in battles against Syrian army forces and pro-government fighters from popular defense groups in Eastern Ghouta region on the outskirts of Damascus.

Many leaders of Jaish al-Islam have been accused of corruption over the past few years.

Alloush’s older brother and the founder of Jaish al-Islam, Zahran, was accused by other armed groups in the Eastern Ghouta of stealing more than $12 million back in 2015, months before he was killed in a counter-terrorism operation conducted by Syrian government forces in the enclave.