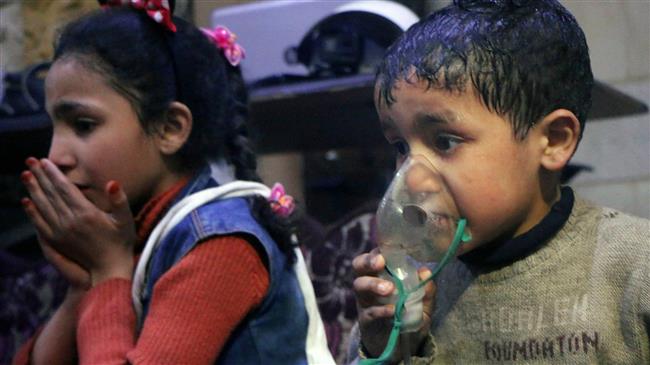 [ Editor’s Note: For years, I have been wondering when was Iran going to really start fighting back from constantly getting roasted for claims of being the main sponsor of terrorism in the Mideast, or for the “crime” of helping countries who were targets of the main sponsors of terrorism, the US Coalition and Israel.

While I am in Iran for eight days beginning on Thursday, I had hoped to interview some of their victims, as Western media has rarely covered them. If Saddam had used chemical-weaponized SCUD missiles on Israel, we surely would have heard of it. The headlines would have rung, “Saddam begins new holocaust against Jews”.

Finally, the Iranians are pressuring the UN that it is not going to get away from the world court of public opinion with its pretending the Ghouta gas attack is still in question. After years of false flag CW attacks in Syria, the starting point should always be a dual track, where you have a red-team/blue-team competition.

One group looks for evidence that it was real, while the other looks for a psyop. This method is used in intelligence analysis, even for training, so analysts don’t fall into the trap of preconceived thinking, like the public is constantly being conditioned. You can see the result everywhere, from the lack of resistance and lack of hard questions posed to those in power.

Unfortunately we don’t see Western scientific institutions weighing in on this critical worldwide problem, meaning the exposure of Western Intel and contractors running a large part of the terror war.

And the motivation is age-old, because they get most of their research funding from governments and the private industrial complex, and they never want to upset that apple cart. This will be a tough dynamic to get changed … Jim W. Dean ]

The Iranian Academy of Medical Sciences (IAMS) has presented its findings related to a recent suspected chemical attack in the Syrian town of Douma to the UN, calling on the world body to resolve ambiguities surrounding the alleged assault.

In a letter addressed to UN Secretary General Antonio Guterres, the academy said the the scientific reasoning cited for the alleged chemical attack has raised many unresolved questions.

IAMS president Seyed Alireza Marandi said Iranian medics, whose fellow compatriots fell victim to chemical attacks during Iraq’s eight-year war on the country in 1980s, have studied the Douma incident and shared their findings with the UN.

“We sent a summary of the items discussed to the UN prior to a final and full consideration given to the assessment of the incident by the world body’s certified centers,” Marandi told Press TV.

Marandi said his academy’s scientists, who “have extensive experience from Iraq’s chemical warfare against Iran in the 1980s”, scrutinized the many ambiguities connected to Douma incident.

The academy members cast doubt on the body of the unverified evidence of the alleged chemical attack, saying the incident was fabricated by groups which have an interest in drawing the Western countries deeper into the Syrian conflict, he said.

“We have experience of treating over 100,000 chemical attack victims. We sent a letter to the UN to raise our doubts,” said Mohammad Ali Javadi, a member of the academy.

Citing scientific reasoning, the academy said the photos and videos pertaining to the unverified evidence should be examined by the Organization for the Prohibition of Chemical Weapons (OPCW).

Hamid Sohrabpour, another member of the academy and a former member of the OPCW, said the US began bombing Syria’s government targets even before OPCW inspectors had arrived in Douma.

“This should raise also suspicion that this was all a false flag operation,” he said.

The suspected attack in Douma in Eastern Ghouta allegedly killed 60 people and injured hundreds others. Western countries were quick to blame the Syrian government, but Damascus strongly rejected the accusations as “fabrications” made by terrorists in a bid to halt Syrian army advances.

Syria surrendered its chemical stockpile in 2013 to a mission led by the OPCW and the UN.

Russia, one of Syria’s key supporters in the fight against foreign-backed militancy, has repeatedly said the purported chemical attack had been staged by desperate militants to provoke further intervention in the conflict by the West.

A US-led military coalition has been conducting airstrikes against it it claims terrorist targets inside the Arab country since September 2014 without any authorization from the Damascus government or a UN mandate.