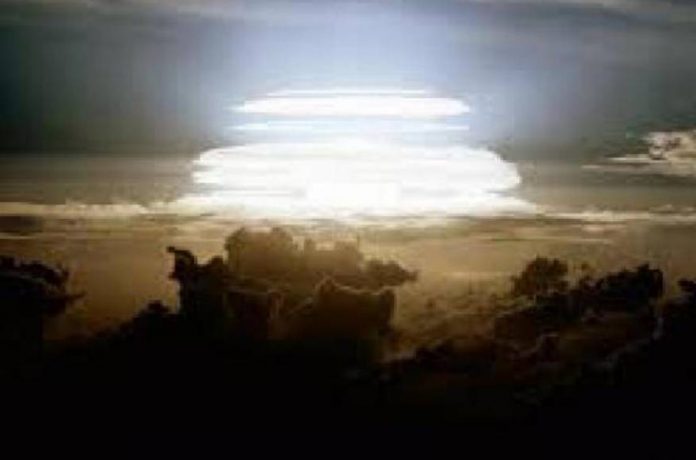 Emmanuel Macron warned of the possible beginning of World War Three should the United States withdraw from the nuclear deal with Iran. Let us imagine how events may develop if Donald Trump torpedoes this agreement on May 12.

The UN Security Council has been developing the Joint Comprehensive Plan of Action, commonly known as Iran’s nuclear program, for more than a decade. The plan says that Tehran should refuse from attempts to either build or possess nuclear weapons. In return, the international community undertakes to gradually lift international and national sanctions from Iran in trade, technology, finance and energy. However, President Donald Trump considers the “nuclear deal” with Iran insane and threatens to withdraw from it unilaterally.

Trump has a personal aversion to Iran

“The elimination of the symbolic nuclear agreement with Iran from 2015 would open a Pandora’s box – this could mean war,” Macron told the German newspaper Der Spiegel. European leaders used to reject the position of the United States on the subject. These days, however, they are ready to consider a few aspects that the deal does not embrace, such as, for example, the development of ballistic missiles – a weapon designed to deliver nuclear bombs to their targets.

Dmitry Abzalov, President of the Center for Strategic Communications, told Pravda.Ru that Donald Trump would most likely torpedo the Iran deal on Saturday. “Trump has an aversion to Iran, and Mueller’s investigation brings to light a few of those close to him. Secondly, Israel’s Netanyahu actively supports Donald Trump. The two politicians will try to take advantage of the Iranian issue to switch public attention to questions of foreign, rather than domestic policies,” the expert told Pravda.Ru.

As for the Europeans, they have economic interests in Iran, Abzalov believes. It goes about colossal investments in the Iranian fuel and energy complex and the joint German-French project to supply Airbus aircraft to Iran. “Torpedoing the Iran nuclear deal would strike a serious blow on European businesses that will fear secondary sanctions on the dollar market. USA’s unilateral withdrawal from the Iran deal will lead to higher tensions in the region,” Dmitry Abzalov told Pravda.Ru.

Let us assume that Donald Trump will not extend the deal. This is the first step. Step two – Tehran will immediately resume uranium enrichment works. This was announced by the chief of Iran’s Atomic Organisation Ali Akbar Salehi and Iranian President Hassan Rouhani himself. Step three – Washington will reinstate the sanctions, while Russia and China fail to pass resolutions condemning Washington through the UN Security Council because of the silence of the Europeans. Meanwhile, Saudi Arabia and Turkey say that they also launch uranium enrichment operations to protect their people from the insanity of the Iranian regime.

Most likely, Israel has had nuclear weapons for a long time already. As a result, we will see four nuclear powers in the Middle East in a few years, where ISIS* is still struggling to survive. North Korea will be willing to revisit its nuclear ambition as well, and the principle of non-proliferation of nuclear weapons will go down in history forever.

The United States may prefer to start bombing Iranian nuclear facilities immediately after receiving a signal about the resumption of uranium enrichment works (step four). However, Iran keeps those objects hidden in mountains, and even a massive attack on the Islamic Republic will not be able to break Iran’s nuclear potential. The appearance of the bomb will be delayed, but the reaction to the attack will follow immediately.

Step five – Iran will block the Strait of Hormuz  – a transport corridor for almost one-third of global oil trade. Oil prices will skyrocket. Step six – Hezbollah will strike Israel, and the conflict will start snowballing with Syria and possibly, Lebanon and Palestine joining in. Iran can also help the Houthis in their struggle against Saudi Arabia, and the war on the Arabian Peninsula will erupt with a vengeance, which, in fact, will lead to the grand finale as Emmanuel Macron described it.

The US will benefit from such a development: USA’s shale oil and LNG will not be too expensive for Europe against the background of high world prices on oil. A new war in the Middle East will bring new loans and orders for the US defence industry. This would contribute to the growth of the American industry and create jobs, jobs, jobs, as Trump promised.

Preparations for a war with Tehran are in full swing: an American court ordered Iran to pay billion-dollar compensations to victims of 9/11 attacks; Benjamin Netanyahu promulgated intelligence materials to prove that Tehran had retained its military nuclear program after the conclusion of the nuclear deal. The ayatollah regime in Iran may collapse, unless, of course, Iran shows consolidated resistance.

Can Iran count on support from Russia and China? The two countries will most likely refuse to join international sanctions against Iran. However, such a humble move will not save Iran in the dollar-pegged global economy.  Moscow may thus lose a landmark ally in the region. This could be another long-term goal of the United States and Israel.