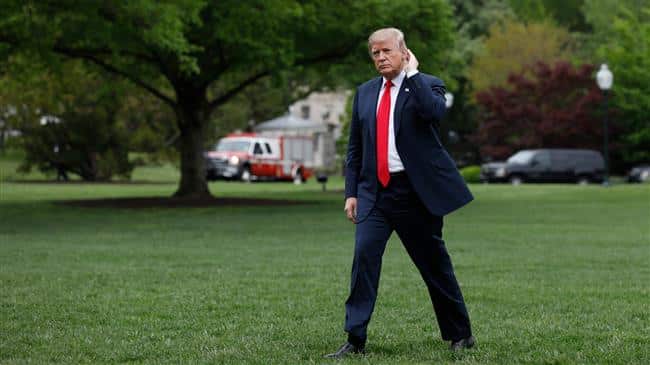 [ Editor’s Note: Trump is once again grabbing the headlines by jumping the gun on the May 12th official date to announce his JCPOA decision.

He has enjoyed the cliff hanger he created to give himself the press coverage of a bold leader, but only the Koolaid drinkers are still in that groove. Being “all about Donald” is not leadership, but narcissism.

His JCPOA partners having all been quite public in wanting to keep the deal. President Tweet has has eased off threatening the EU with his  tariff torments. China is holding firm on the JCPOA, as is Russia, so if Trump wants to be the odd man out he will walk the road hand in hand with Netanyahu.

The only thing I can think of that might dissuade him is that it would put him into a position with North Korea where he would not be a credible principal, which he isn’t. Obama was at least credible, but look what he did to Libya and Syria. Trump has yet to “trump” that, other than Afghanistan going down the tubes.

This is what happens when a former NY mob buddy grows up to be a reality TV host, and then is viewed as qualified to be President. Were all the other that bad, and if so, what a sad state of affairs that reveals about the soul of America … Jim W. Dean ]

US President Donald Trump says he will announce whether Washington will pull out of the Iran nuclear deal on Tuesday.

The US is to formally decide on the issue on May 12 as European allies of the United States, particularly the UK, are reportedly trying to convince the president to stay in the deal backed by five other world powers.

Trump’s Monday tweet follows his attack on a top official from the Obama administration in charge of negotiations that yielded the deal in 2015.

“The United States does not need John Kerry’s possibly illegal Shadow Diplomacy on the very badly negotiated Iran Deal.  He was the one that created this MESS in the first place,” he tweeted Sunday to point the finger at the former secretary of state.

British Foreign Secretary Boris Johnson has been among the top figures making the case for Trump to keep the pact intact.

Europeans are helping pave the way for Trump to claim that he has “fixed” the deal without actually making any change to it. Johnson went as far as saying that “we need to find a way of fixing” yet arguing that one should not throw “the baby out with the bath water.”

The European Union, France, the United Kingdom, and Germany have expressed support for the deal in the wake of new anti-Iran claims by Israel.

Iran has on numerous occasions asserted that its nuclear program is merely peaceful and not meant to make nukes.