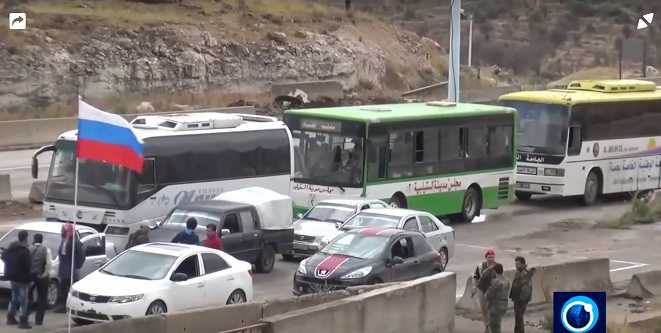 [ Editor’s Note: This story has not gotten much strategic coverage; but it is just the usual jihadis taking another evacuation offer to retire permanently from the conflict, or retire temporarily by going to Jarablus to be eventually used against the Kurds from Northern Syria.

I have a soft spot for Homs, as it was the city I selected to tour polling stations on election day in June 2014. It was a memorable trip, with the run up from Damascus and its endless check points, and then seeing the front line devastation where the main combat had taken place.

What makes this Northern Homs-clearing story special is that it opens Highway 5, the main route to Aleppo, giving the SAA more flexible and faster internal lines for shifting forces around in future combat in the Idlib area and possibly with the Kurds at some point. The Kurds have dangerously offered themselves as hosts for a US occupation of Syria; such a union would unite Turkey and Syria and change that dynamic.

Doing that would require getting the Iraqis to move US forces out of their country to cut the overland supply route and the close-proximity air base support the US has from inside Iraq.

And next would be getting a credible air defense into northeast Syria so that rogue supply flights could not keep a steady flow of supplies going in. The UN has failed miserably in challenging the US-coalition countries from spreading their new form of joy and cheer by ascribing to themselves to enter another country to conduct military operations in support of both rebel and terrorist factions.

We have seen not a whimper from the UN personnel about this, where even a “walkout” one day would have gotten huge news, with their demanding they will not be a tool for such abuse. It seems such counteractions are merely a dream, at this point… Jim W. Dean ]

Takfiri militants are handing over their last strongholds in Syria’s western provinces of Homs and Hama under a Russia-brokered deal with the Damascus government.

The evacuation began on Monday, when the first batch of the militants and their families left the town of Rastan in Homs through a corridor.

On the first day of the evacuation process, which is expected to last a week, more than 800 militants and their families were bused out and transported to militant-held areas in the northern city of Jarablus and the neighboring Province of Idlib. The outgoing buses are escorted by Russian military police.

The areas in Homs include Rastan as well as the towns of Houla and Talbiseh and the villages around them. The deal came about on May 2, when militants from several factions of the so-called Free Syrian Army agreed to disarm and return those areas to government control.

The evacuation enables the government to reopen the highway connecting the provincial capitals for the first time since 2011, when foreign-backed militancy broke out in Syria.

“The road linking Homs, Hama and Aleppo will be reopened. Relevant international parties and organizations will also enter the region to restart their work and satisfy the basic needs of the local population and the residents of northern villages,” said Samir Ibrahim, a Syrian army officer.

On the back of similar agreements, the government managed late last month to gradually free the Damascus countryside of Eastern Ghouta, which was once controlled by various militant groups and served as a launch pad for deadly terror attacks against residents of the capital.

The government had initially launched a major Russia-backed military push in February to liberate Eastern Ghouta.

The militants holed up in the suburban area first put up stiff resistance against army advances; however, being no match for the national army, they later capitulated. The government then resorted to withdrawal agreements with the militants in an effort to decrease military operations and protect civilians.

Observers say the militants’ defeat in Eastern Ghouta demoralized their fellows in others areas, prompting them to stop resisting the Syrian army’s liberation operations and agree to evacuation deals.

Such agreements usually give those militants that agree to make peace with the government and lay down arms the option of staying where they are along with their families.

Damascus and Moscow have now focused their efforts on a small enclave south of the capital, which holds a few hundred Daesh terrorists. Syria and its allies defeated Daesh late last year after three years of uphill battle, and are now engaged in neutralizing pockets of resurgent elements.