Barack Obama has recently taken Trump to task for abandoning the Iran deal, and Obama is certainly right because there is not a logical alternative to the deal at all. None whatsoever. One can say that the deal was framed in order to curb Israel’s incessant and irrational demands.

“The reality is clear. The JCPOA is working — that is a view shared by our European allies, independent experts, and the current U.S. Secretary of Defense. The JCPOA is in America’s interest — it has significantly rolled back Iran’s nuclear program. And the JCPOA is a model for what diplomacy can accomplish — its inspections and verification regime is precisely what the United States should be working to put in place with North Korea.

“Indeed, at a time when we are all rooting for diplomacy with North Korea to succeed, walking away from the JCPOA risks losing a deal that accomplishes — with Iran — the very outcome that we are pursuing with the North Koreans.

“That is why today’s announcement is so misguided. Walking away from the JCPOA turns our back on America’s closest allies, and an agreement that our country’s leading diplomats, scientists, and intelligence professionals negotiated.

“In a democracy, there will always be changes in policies and priorities from one Administration to the next. But the consistent flouting of agreements that our country is a party to risks eroding America’s credibility, and puts us at odds with the world’s major powers.”

Obama also stressed that foreign policy and debates should be based “on facts,” not on some kind of incoherent and inconsistent policy. What, then, are the facts? Well, simple.

The Israeli regime is dictating what US officials can and can’t say with respect to the nuclear deal; Israel is playing double standards; Israel does not sign the Non-Proliferation Treaty; Israel does not want international inspections; Israel is a terrorist state and supports terrorism at this present moment in places like Syria.

Those are not assertions; those are facts which can be verified by any observer using historical and scholarly sources. Facts, said John Adams, are stubborn things. Since people like Benjamin Netanyahu do not like facts, then they attack the people who report facts. That’s why he didn’t like Obama that much when the Obama administration made it very clear that there was a conflict between Benjamin Netanyahu and the United States in the Middle East.

Benjamin Netanyahu, in a sense, is facing an enormous challenge at this present moment largely because more people tend to ally with facts when it comes to the Iran deal. He doesn’t have the magical power to drug people and then force them to reject the Iran deal. His only recourse is to literally manipulate Donald Trump like a remote control.

Lead guitarist Angus Young of AC/DC once said: “Someone else is steering me. I’m just along for the ride. I become possessed when I’m on stage.” One can say something similar whenever Trump starts talking about Iran. Someone else is steering him, and he’s just along for the ride. He cannot think for himself. He cannot flesh out a serious foreign policy that is based on the moral law and political order. He has to abide by the Israeli regime. 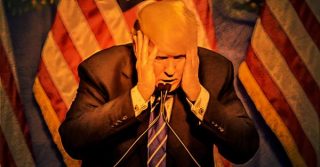 The interesting thing is that “54 percent of Americans said they ‘strongly’ or ‘somewhat’ supported the Iran nuclear agreement while 27 percent said they were “strongly” or “somewhat” opposed to it.” So, can we really say that we are living in a democracy? Or is it possible that the Israeli regime is governing US foreign policy?

Listen to the New York Times:

“For Prime Minister Benjamin Netanyahu of Israel, President Trump’s decision on Tuesday to abandon the 2015 agreement was such a wholesale vindication that he abruptly cut short a trip to Cyprus to be in Israel when it was announced.”[2]

What did Netanyahu himself have to say about Trump rejecting the deal? The mad man in Tel Aviv was more than happy to see that Trump was acting as his agent and his political whore:

“Israel fully supports President Trump’s bold decision today to reject the disastrous nuclear deal with the terrorist regime in Iran. Israelis opposed the nuclear deal from the start because we said that, rather than blocking Iran’s path to the bomb, the deal actually paves Iran’s path to an entire arsenal of nuclear bombs, and this within a few years’ time.”[3]

According to Israeli journalist Ari Shavit, Netanyahu’s “world view is very clear. Iran is Nazi Germany. Israel is England. He is Churchill and America is America. His main goal has been to persuade Roosevelt to get into a conflict that will crush Iran. It didn’t work with Obama. But with President Trump he sees a golden opportunity.”[4]

We are obviously repeating history here. Since the Zionist establishment thinks that World War II was great, then it must be all right if we repeat the events leading up to the war itself. This is obviously dangerous. The West needs to rise up and send Netanyahu a beautiful ultimatum: “Your manipulation and ruse are over.”